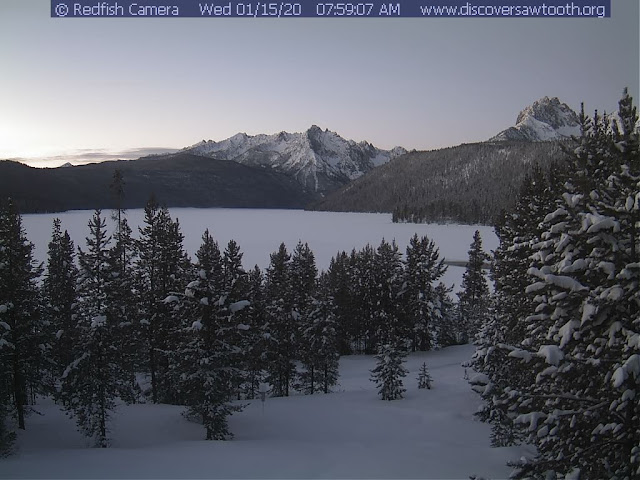 Healing Happens.  Two months ago on November 14, Susun tripped coming out of a travel trailer and broke a bone in her lower right leg.  It's a well known fact that bones take awhile to heal so we figured maybe two months would be a OK estimate.  Sure enough, she drove her little truck yesterday for the first time since the mishap.  Of course, there's more healing to go.  And a lot of caution and careful movement lie ahead.  But she's a model patient and has  been following Doctor's Orders really well.  We both fully expect here to be near tip top condition by the time her February 19th trip to Southern California comes around.

Once the mid-November incident took place, we were both pretty much "confined to quarters" here in Rimrock.  I served as caregiver and chauffeur while Susun recuperated and allowed the healing process to take place in its own natural time frame.  That meant I had a lot of time on my hands so that's when I began digging a lot deeper into some history stories I love.  And one thing led to another.  And I found even MORE history stories to love.  Before you know it, I began posting numerous history stories on various Facebook history groups in Flagstaff, Prescott, Grand Canyon, Verde Valley, Phoenix and Globe.  Over the past two months, such activity has turned into a "thing" and it's now an almost daily activity.  Meanwhile a Facebook page I created for the history stories is reaching around 15,000 people per week.

The whole "history thing" that has sprouted and grown as a result of Susun's mishap is a welcome addition to both of our lives.  I enjoy the digging and the telling and Susun enjoys the listening.  The endeavor continues to grow.  We're working on two stories that are larger than can be told via Facebook or even perhaps the ubiquitous blogs.  So that means we're having to finally delve into the arcane, inscrutable world of ebooks.  Even though we're a lifelong book lover, we've never taken a liking to ebooks themselves and have studiously avoided any confrontation with the ebook publication process.  I'm sure my life would be much better overall if I never had to even THINK about ebook publishing, let alone actually use it.  Ah, but times change and now we are engrossed in the sticky spider web of ebook publishing.  UGH!

The story we're trying to tell is about the Crash of the MGM Lion in September 1927.  The story itself is mesmerizing.  The method of trying to tell the story is anything but!  Probably the only way we're even going to get a break through is to use a blog to write each chapter and then transfer the narrative and photos to the convoluted altar of The Gods of ebooks.

Weather wise there hasn't been a whole lot to write home about lately and it sure doesn't look very promising for the near future either.  As usual, we all had high hopes of a "wet winter" when the first few gobsmackers gut punched Northern Arizona.  Alas, they seem to have been just a tease.  Or, as someone said, "Well, that was our winter--it's spring time now."  Meanwhile our Idahome is getting hit hard but that's another story.

Dear Friends Maria & Tim have been visiting Second Chance Ranch in their Gulf Stream Class A motorhome for the past few days.  The Wonderful Couple free ranges far and wide from sea to shining sea but they always seem to gravitate back here to Central Arizona.  We love their visits and eagerly look forward to their arrivals.  We're always sad to see them go but we know they are off on yet another thrilling, fun-filled adventure.  In a mere two days they will be tucked into the capital of Costa Rica to begin a two month stay in that country.  We're hoping we will see them in Idaho sometime this summer.

Speaking of summer, our planning continues.  As most folks know, we love taking one trip a year to Sawtooth Country.  Last year's trip was delayed into late July because a Dear Friend was going to be there then.  This year we're back to a more flexible schedule so we're already trying to squeeze into Sunny Gulch Campground outside Stanley and not far from Redfish Lake.  Wouldn't you know it, the few reservable sites at Sunny Gulch are already full.  Of course nobody up there right now is remotely thinking about camping.  They are all practically snowed in.  The Sawtooth back country generally has about five feet of snow right now.  It always seems so weird to be sitting down here in Arizona talking about Smoke Season and river runoff and such when Sawtooth Country is under a deep, deep blanket of snow.  Ah, the Life of Snow Birds!

We spent some fun days at Susun's brother's Mesa Place in December and we're looking forward to going back again this month for a short sojourn.  Roger and Nancy are lovely hosts and always roll out the red carpet for us.  Chances are pretty good we will head down that way next week.

Today being January 15th marks the unofficial end of Rimrock's Annual Cold Spell.  According to The Book Of John & Susun, the Rimrock's Annual Cold Spell begins on December 15th and ends on January 15th.  Of course, it isn't always perfectly cut and dried but it's a danged good guess as to when the coldest of the winter's cold will be upon us.  So far this Arizona Season has been mild.  Our lowest temp was 16 degrees way back in early November.  Most of the daily lows have been in the low 20's with some dips into the upper teens.  Considering that we've seen it get down to 2 degrees here, such temps are definitely considered mild.

Well, that's all there is to write about home.  Thanks for reading.  Happy mid-January.
Posted by John Parsons at 8:06 AM