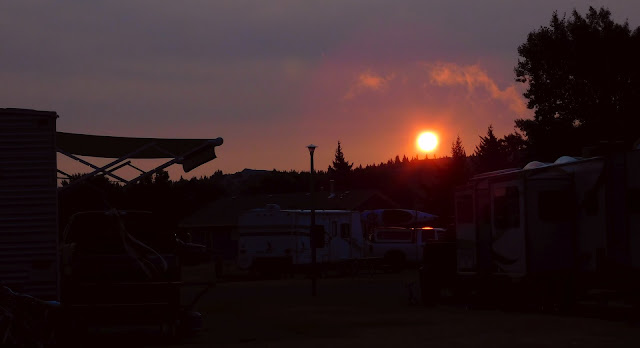 It's another Red Sun kinda morning. We sure were hoping we'd have pristine air today after the storm.  Nope.  That sneaky smoke crept in overnight and now it's hazy once again.  Actually, the visibility is better than it has been for quite some time.  However, the jagged lines of the peaks are layered among one another in the typical blue pre-sunrise haze.We made a deal to return here next July before fire season flames up.  There are two mini-mottos here in Waterton: A) Live Inside The Postcard and B) Life Inside A Postcard.  Well, we really want to take that boat ride inside the postcard.  We want to be inside that postcard badly enough that we're already planning next year's Road Trip here.  We like this place enough that we'rer willing to spend most of our camping time here.  We might eddy out in Saint Mary for a day or two but Waterton will be the destination next year, not Glacier.  This year Waterton was tacked on as a bonus side trip. Glacier was the destination.  Next year it's going to be the other way around.  And next year, we're gonna be inside that postcard looking out.


Waterton is a very sweet spot and obviously we're smitten with Waterton.  No wonder there are so many people.Even though we didn't get on the boat yesterday was a very fun day.  First, we met with the Townite Manager Robert Elliott.  Naturally, he had never heard about pickleball.  We gave him the canned speech and urged him to co-stripe at least one of the tennis courts.  He was a cheerful, hospitable fellow and seemed somewhat interested.  Nexy year we will see if the seed we planted yesterday pays off.


Then we soaked up the ample ambiance of The Prince of Wales Hotel.  That 1927 edifice is yet another example of the lost art of building epic large lodges. What a place.


We happened to show up in Waterton during the annual Blckfeet Indian Heritage Festival.  It began yesterday and will continue this week.  Although the posters said the dancing and drumming began at 1:30, we learned it actually strarted at 4 PM so we drove out to Crameron Lake.  It's 9 miles outside of Waterton up in yet another signature glacial canyon with a postcard mountain sitting on the far side of the lake.Parks Canada threw huge gobs of money at the site.  Everything there is sparkling brand new.  New parking lot, three new toilet buildings, new interpretive displays, new snack shed, two new amazing boat ramps, new landscaping, you name it—everything brand new and top notch quality construction.  It had to have cost them at least a million dollars for all the new stuff there.  And, of course, the place was packed with people.  The boat rental outfit was doing a box office business and there was a long line for ice cream in the snack shed.


We learned that Waterton was actually born out of the construction of Western Canada's very first oil drilling rig.  Strange irony, eh? The site of the first oil well is dutifully marked with a hokey little derrrick.  It's cute.Along about 4 PM, we went to the large grass field beside the Community Center. Scores of Blackfeet Indians were donning their Pow Wow outfits or setting up to watch Family and Friends perform.  Two tipis were being erected.  Excitement was in the air.  We stayed for the better part of two hours and saw some iconic Pow Wow dancing and drumming.  It was an exhilirating experience for sure.Then we settled down to some serious cribbage and enjoyed a fine dinner in Site C10.Today, it's off yonder back south.  We know not how far we will travel or where we might camp.  But we trust it will be a fine day's journey with another cozy camp somewhere down the road.
Posted by John Parsons at 1:02 PM