B1 bomber in rear view mirror

(Editor's Note:  Current events have brought this story back from over 16 years ago.)

We retired the first time back on January 10, 2001. After spending nearly 10 weeks in Puerto Penasco, Sonora, Mexico, we returned to Rimrock to set our life in order.  We then set forth on what we expected to be a multi-month trip that would take us to the northern tip of Vancouver Island.  Anyway, we surfed ashore in Kanab, Utah, on April 12.  We were somehow smitten by Kanab and wound up staying there six weeks.  Each day during that time, we'd try to do something unique, new and exciting.  Since Wednesday, April 18 was my late Dad's birthday, we decided to do a really, really long back country Road Trip from Kanab up Johnson Canyon to the Skutumpah Road and then down Cottonwood Canyon back to Highway 89 by the Paria River and from there back to Kanab.  We were traveling in our little 1987 Suzuki Samurai and felt very comfortable being out in the middle of nowhere.  We left very early since we knew it would be a really long day on very slow roads.  Sure enough, the hours wore on and on and we didn't get back to the pavement of Highway 89 until very late in the afternoon.

Meanwhile, between the  Paria River and Kanab lies a very substantial hill.  It's the northern part of the Kaibab Monocline.  For modern high speed vehicles, that hill is virtually nothing.  However, for a 1.3 liter engine in the Samurai, that hill represents a very tall challenge.  Naturally, our speed dropped way down as we ascended the hill.  We were chugging and puffing along as low as 35 miles per hour.  We actually thought doing 45 was really flying.  It seemed like forever to get to the top of the monocline.  I kept a very close watch on the rear view mirror since I didn't want to get rear-ended by someone traveling too fast who might misjudge our speed.  I also continually eyed the road's shoulder for "escape routes" in case we were about to be rear-ended.  That's why I had my eyes more or less glued to the rear view mirror.

Finally, as we were just about to top out on that long, long hill, my eyes dang near popped out of my head.  I will never forget what I saw as long as I live.  I matter-of-factly said to Susun, "There's a B1 bomber in my rear view mirror.  And there truly WAS a B1 bomber in the mirror.  It neatly filled the mirror, wings, tail and all.  The whole thing fit right in there like a picture postcard.  I couldn't even believe it.  And, naturally, the B1 bomber was gaining on us like you read about.  Since I had already been keeping an eye on the shoulder for escape routes, I jammed the steering wheel to the right and bounced into the brush.  We both leaped out of the Samurai just as the B1 bomber went screaming and thundering right over our  heads.  We quickly looked back and saw that a second B1 bomber was fast approaching.  Somehow Susun pulled out her old 35 millimeter SLR camera and managed to get a picture of the second bomber as it flew seemingly mere feet about our heads.  The pilot actually waved at us with one of those classic "thumbs up" poses from the cockpit.

Since we were right at the top of the hill, we watched in speechless amazement as both bombers dropped down low in front of us.  We were actually looking down on them from above.  The experience was one of the biggest adrenalin rushes either of us has ever had.  Our hearts were pounding wildly, our faces flushed and our skin covered with perspiration.  It was so overpowering all we could do was hug each other and gasp for breath. My Dad died in 1998 but my thoughts immediately went to him.  Somehow, I figured he had arranged the whole thing. I looked to the blue sky and said, "Thank You, Dad!"

We were both chattering incessantly about it when we returned to the Crazy Horse RV park in Kanab.  One of the Old Timers there in Kanab told us the twin B1 bombers were a common sight.  The bombers used that corridor for their ground-hugging exercises to practice flying below the radar.  They always reached their lowest point to the ground right at the crest of the monocline.

So, when they were coming up behind us, one of them would definitely be below us and could easily be seen in the rear view mirror.

On Veteran's Day 2016, we both were finally able to stand next to a real B1 bomber at the Hill Air Force Base Museum north of Salt Lake City.  The aircraft is so huge it's mind-boggling.  Photos simply can't capture the scale of the behemoth.  Standing there beside that museum display really brought back April 18, 2001, in Kane County, Utah, on US Highway 89.

And it brings home special and meaningful relevance today as the B1 bombers on Guam stand locked and loaded to Fight Tonight, as the Pacific Command there is wont to say.  The brave flight crews of those bombers are in our thoughts and prayers today.  We wish them Best of Safety and God Speed to return to warm embrace of their Families and Loved Ones. 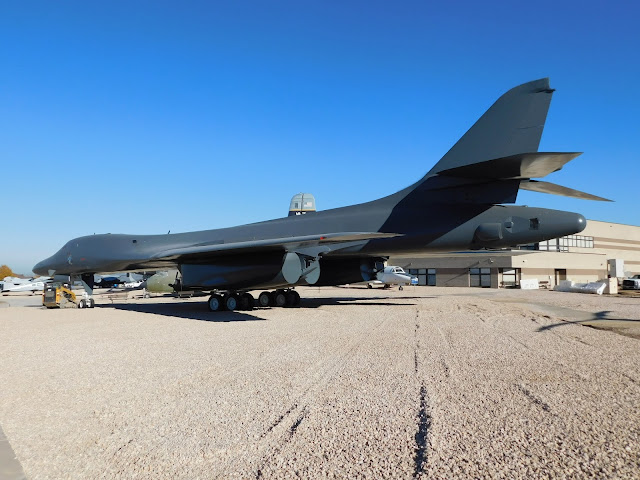 Another photo from our visit to see a B1 bomber on display at the Hill AFB Museum 11/11/16.

Here's the B1 Wiki: https://en.wikipedia.org/wiki/Rockwell_B-1_Lancer