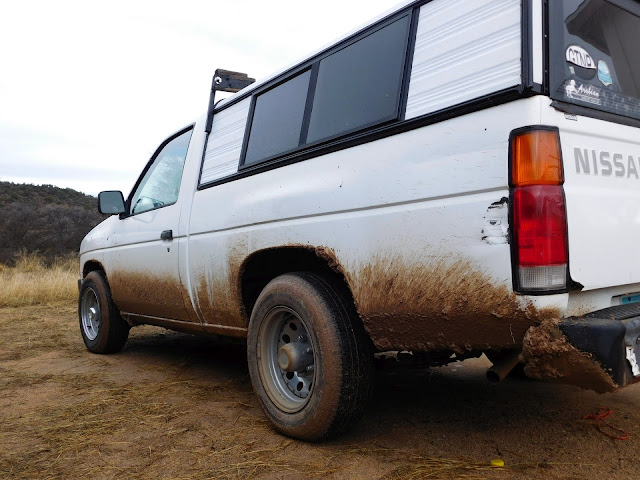 Summary:  We should have been (and probably still would be) badly stuck in a muddy bar ditch on a lonely road we shouldn't have traveled.  Intuition once again saved the day.

Long Version:  We needed to run a brief errand to The Village of Oak Creek (VOC) to close out a dormant bank account with a whopping $47 in it.  We figured a rainy day was perfect for that errand.

Meanwhile, we decided to take a Carril prohibido, a Verbotene Autobahn....a route about which Susun says, "Just don't go there, John."

Well, I had a hunch the forbidden road had just been graded by the Yavapai County Blade and so it was.  In fact, the road was in such good condition, I began mentally composing a text message to Susun: "Well Road AWESOME--BEST EVER!"

Meanwhile, a couple of miles from VOC, it began to rain so hard, you couldn't see a trace of the iconic Red Rocks.  Everything was blotted out by the rain.  I didn't think much about it.  I ran my errand, got the $47 and then  returned toward Rimrock.

As I approached I-17, Ye Ol' Intuition grumpily mumbled, "We better stay on the pavement, Buckaroo."  But, no, I ignored the intuition because The Well Road had been in such good shape only mere minutes beforehand.  Meanwhile, I reasoned that the rain I experienced in Sedona never touched the Rimrock area and was an isolated cell perhaps spawned by a local vortex.

Sure enough, I turned right onto The Well Road and it was in fine shape.  Nary an issues whatsoever...until...

As I began to approach the Bar D Ranch intersection, I noticed the road getting slightly muddy but didn't think anything about it.  Hey, I still had fine traction and no mud was building up on our all-season tires.

And then...there's a special tight, blind curve well known to driver of The Well Road.  The curve sits in solid bedrock so you have to slow down to a crawl to safely navigate that curve.  If you pull too far to the right and someone's coming too fast, BAM...you know how that goes.

Anyway, I dutifully crawled over the bedrock and around the curve and then began the half-mile downhill past the Soda Springs Ranch road intersection down to the flats beside Montezuma Well National Monument.

And that's when Ye Ol' Intuition woke back up again and started shouting at me.  SLOW DOWN & LOOK, it shouted.  So, when it shouts like that, I obey.  Sure enough as I peered into the gray afternoon, I could see a small sedan buried nose deep in the bar ditch about a quarter mile ahead.  And meanwhile, I saw lots of lights and what looked like a possible vehicle pileup.

For the rest of you, here's a kinda of description of it.  All four of your tires become thickly coated with a sticky, clay gumbo and all your vehicles systems become totally useless.  Steering, braking, acceleration, you name it, you don't have it any more.  You are at the mercy of gravity.  All you can hope to do is to turn your front wheels fully in one direction or another and use them like friction devices.

So, that's what I was doing as I was surfing downhill, pretty well knowing I was going to slide into several other vehicles and make a great big wreck and THEN get stuck forever in the bar ditch.

And as I was sliding down that snotty, gawd-forsaken slick hill, I remember the cheater route to Soda Springs.  Even though I could see the cheater route looked like a world class mud bog, at least it was better than a car wreck.  And somehow I was able to lodge my front wheels into the deep ruts of the cheater route and then accelerate and fish tail down to Forest  Road #121 where I knew there would be some life-saving actual, real gravel.

Whew.  Sure enough, I surfed through the mud bog and slide slipped out on Road 121 and came to a stop with tires completely caked with 1-2 inches of the slickest mud you've ever seen.

And that's when I thanked my intuition and got out of the truck and decided I was calling that place home for awhile.

Meanwhile, I walked up to the scene on The Well Road.  The sedan was completed augured into the bar ditch.  But meanwhile two honest-to-gosh cowboys were working expertly and diligently to unstick the sedan.

Frankly, I didn't give them a snowball's chance but they know what they were doing and expertly managed to unstick the sedan.

Meanwhile a tourist sedan cam around the slick corner and almost slid into the same bar ditch.  And then another pickup truck got into the mix so there were FIVE vehicles perched on the same, steep slick curve.  I smiled as I looked at my truck safely tucked far, far out of the way down on Road 121.  ANd, yes, I thanked my intuitioin yet once again.

Meanwhile, the young woman who had been in the sedan got out and we struck up a conversation.  Turns out she lives at the Bar D Ranch.  The second she got stuck she called the ranch for  help and her wrangler husband and the ranch owner rode to the rescue.  That's how I know they were real cowboys who knew precisely what to do.

Any how, while the cowboys were still there, they unstuck the tourist just for good measure and then they rode off into the muddy sunset.

Meanwhile, the guy in the other pickup turned out to be The Phantom Cowboy I've always wondered about.  As chance would have it we had a chance to swap talk, too.  I've seen him going back and forth on The Well Road for at least a millennia but never knew who he was.  Turns out he works for the Forest Service as a "horse exerciser!"  Seriously.

So, that was a real fun conversation.  Anyway, I told the cowboys and the horse exerciser I planed to stay put until The Well Road dried out.  They all kinda chuckled the polite way cowboys can do.  I knew what they were thinking, "Dries out, yeah right, buckaroo."

But I know The Well Road as well as anybody and I figured it was a very brief rain and since the road had been dry less than an hour beforehand, the rain water would get soaked into the clay and the clay would swell up like it always does and get tacky but not snotty.

So, I just  kicked back for 30 minutes and kept walking the road testing the slipperiness and waited until I felt like it was tacky enough to drive.

Then I found a little spot on Road 121 to drive in high speed circles on some non-muddy surface.  By doing several 360's, I was able to shed all the mud from the truck tires.

Meanwhile, I had scouted out The Well Road and figured out a way that I could drive in the wrong lane to "high side" the steeply sloped curve.   That part of the plan worked to perfection and I was able to avoid sliding into The Bar Ditch Of Oblivion by driving a blind curve high side at a high rate of speed.  But I had scouted it and was confident the plan would work and it did.

And once I got back on a firm surface, I speed up and threw all the remnant mud off the tires and came home and let out a HUGE WHEW!

Seriously, that was a close call and Ye Ol' Intuition saved the day once again!