A so-called Atmospheric River brought copious rainfall to California the last couple of days. Thursday evening, December 11, I sat glued to my computer screen watching hydrographs of various Golden State rivers and streams.  Once again, I was in my element... "pickin' peaks."

Pickin' peaks as rivers rise is in my DNA and a cherished lifelong lifestyle.  It's part and parcel of who I am.  Last night was just another chapter in my thick book of Pickin' Peaks.  We had great success Thursday night and picked two peaks--peaks of the biggest rivers flowing during the Atmospheric River event.  We picked the peaks of both the Eel at Fort Seward and the Sacramento at Red Bluff.

As always, it was another exciting episode of one of our very favorite activities. So, how did we become "peak pickers"?  And why is pickin' peaks such a cherished lifelong lifestyle?  Well, we can sum up both questions with two simple words: Family History.

Pickin' Peaks is in our DNA because both my parents were born into Peak Pickin' Families and when I came along, I already had Peak Pickin' in my genes.  I was raised into the time-honored tradition of pickin' peaks.  My earliest memories as a tiny child are those of peak river and creek flows.  Whenever the Wabash River or Wildcat Creek were flooding, it was my parent's obligation and sacred duty to go bear witness to those events.

Mom and Dad and their family members, Dear Friends, Associates and total strangers would stand on the river or creek banks as close as they dared to the raging, roiling waters.  All eyes, minds and hearts were transfixed together by the surging chocolate flows.  Whenever anyone said anything, it was always about The Water.

"When will that river peak?  How high do you think it will go?  Why, I've never seen it this high before?  Can you believe how high this creek is today?  Oh, I bet it's peaking right now.  No, it's not, it's going higher, LOOK!  Can't you see that new high water mark?  Did you see that whole tree just go by?  LOOK, another tree is falling into the creek!  Oh, I hope it doesn't take our house.  Look at those cars over there halfway under water.  It's peaked!  It's peaked.  I see it. LOOK!  There's the high water mark already showing on the bank.  See, I put in a stick!"

My Mom always gripped my hand tighter than a vice during those times.  There was no chance I could have ever bolted away and disappeared in the flood waters.  Mom and Dad were totally mesmerized by flood waters.  They could never really get enough of floods.  They would often jump in an old 1950's four-door Chevy with "three-on-the-tree" and roar off to see some other creek jump its banks and molest farmland, roads, bridges and occasionally a house or two.

I can't even begin to imagine how many flooded roads and stranded bridges I saw as a child.  You see, early engineers were generally always smart enough to elevate their old, tressle-style bridges far, far, FAR above even the wildest possible flood.  Generally, however, the roads leading to those bridges would be deep, deep under water.

Sometimes, however, really big floods would creep ever closed to a stranded bridge.  That's when huge crowds would gather to watch in awe as the flood crept ever higher to caress the bridge bottom.  I can so clearly remember the palpable fear in those crowds.  But it was fear mixed with that human desire that somehow lives to see train wrecks and other disasters.

You see, that's where I got my peak pickin' DNA.  It goes way, way back and it's been part of my life since my life began.  I could no more walk away from peak pickin' than I could change my name and gender.  It's me.  It's who I am.  I hope that when I die, God will have a place for me to pick peaks for the rest of all eternity.

My Mom grew up on Wildcat Creek near Lafayette, Indiana.  Her Dad eeked out a meager living digging mussels from the muck of the creek bottom.  Her house was built on stilts and perched precariously beside the creek.  When the floods came, her family used a boat to get back and forth to the house. Mom knew the pulse of that Wildcat Creek at least as well as she knew her own heartbeat.  She met my Dad there on the banks of The Wildcat and they fell in love and made me part of their Family History.

From my earliest days, they both would patiently teach me how to watch a river or creek.  They would point out the tiny little nuances of what a river does or how a creek behaves.  I learned the annual life cycles of river and creeks almost before I began to walk.  I learned to actually feel the pulse of flowing water.  It was part and parcel of growing up.

And that's why I can sit rapt in front of a computer screen as I did last night, living and breathing my life with rivers far from home.  You see, all rivers and streams worldwide share common bonds and behaviors.  Yes, each has its own personality but all those long ribbons of life where water flows are brothers and sisters working together to make magic upon our planet.

It is always exciting and exhilarating to tackle the challenge of pickin' peaks on distant giant rivers.  The Eel's watershed above Fort Seward is over 2,000 square miles and the Sacto's is 8,900 square miles.  So, pickin' peaks on those two rivers was steppin' a little out of my normal comfort zone for such things.  But a river's a river..that much I know for sure.  And river's have watersheds and watersheds can be known and quantified.  And weather and rainfall can wreck their havoc but they can also be measured and known.

And with a little luck and a long life of pickin' peaks, it's still possible to point a finger and say, "YES!  That's IT!" just like I heard so many Old Timers say as I stood making Family History on The Banks of The Wabash River and Wildcat Creek. 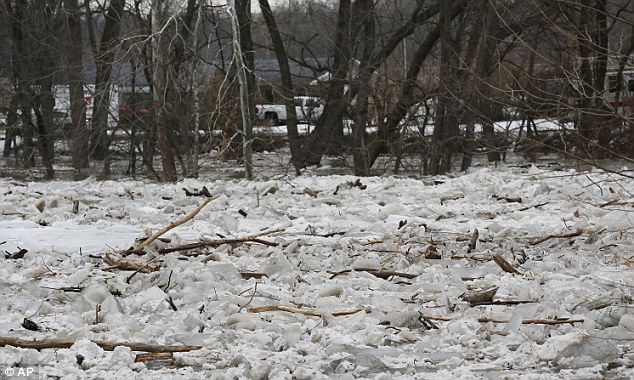 The Wildcat showin' off grinding ice near my Mom's old house in Tippecanoe County, Indiana.
Posted by John Parsons at 7:59 AM

I remember you marking the high water on the Colorado one night. The next morning the river had gone down! I guess that was a pick.