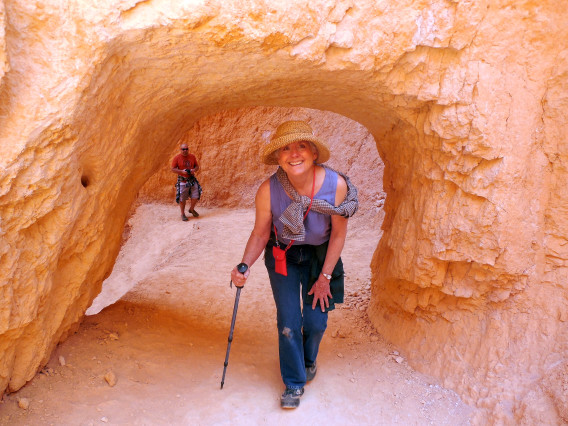 Bryce is Nice.  Bryce is cozy. Bryce is glamping. Bryce is world class day hiking.  Bryce is Ambiance @ The Old Lodge. We love Bryce. Bryce is home to us.

We fell under the spell of Bryce in 2001.  We've been enchanted by Bryce forever since.  We've been to Bryce so many times it feels just like home.  Afterall, it's only six hours away from our Arizona Home.

We got lucky this time. Mere seconds made the difference. We arrived at the Bryce Canyon National Park entrance station at 3 pm Thursday.  We beat feet for Sunset Campground.  There was only one campsite left that was suitable for our travel trailer.  We grabbed  it while the guy in the rig behind us could only roll his eyes.  He would have taken it if we hadn't.  It was that close. Pure luck.

Oh, Bryce!  As you may recall, we couldn't stay at Bryce this Spring when heading north.  Sunset Campground was closed so the NPS could put in a brand new Taj Mahal bathroom.  My, oh, my, what a great new facility.  A vertiable shining sanitation shrine!  Yes, it's heated and, yes, it has hot water.  The new addition makes Sunset Glampground even more appealing, especially for the $7.50 per night fee. 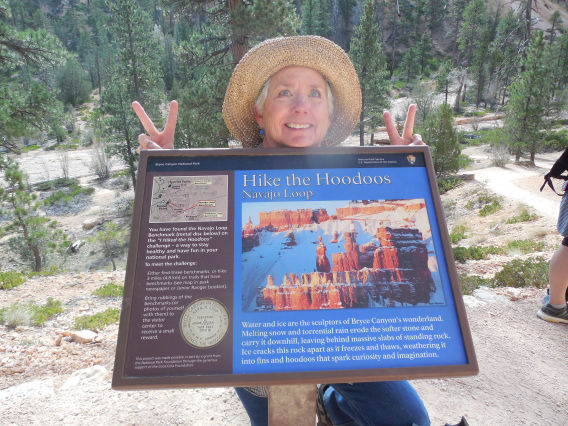 It only dipped down to 26 overnight and that's casual for our rig.  A little dose of heat from the forced air furnance and we're good to go.  We let the morning temps rally to the upper 40's before venturing off to The Whoo Hoodoos and Bryce's famous trails: Peekaboo Loop, The Hat Shop Queens Garden Wall Street, Tower Bridge, Navajo Trail and, of course, the legendary Fairyland Loop.

With three full days here we're hoping to get our sea legs back on Bryce's short, steep but super sweet trails.

We got lucky this time in more ways that one.  Get this: Sunset Campground closes for the season the morning we break camp and drive out of here October 20. Whew, Bryce by a whisker this Fall!

All of our equipment is behaving well.  We did have a delayed departure from Idaho Falls when we realized our trailer brake wasn't working.  Luckily, the Wizards at First Street Welding had us fixed up  right and proper and back on the road by 1 pm.  Twenty minutes later we were on the Snowbird Flyway heading south. 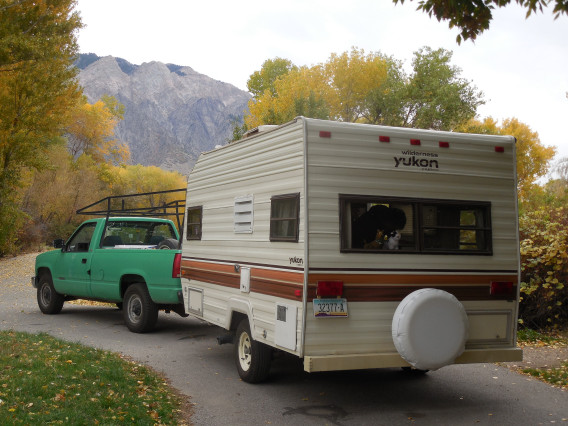 We really like the New Plan of driving only to Willard Bay the first day.  It's not much over three hours and it's a wonderful place to stay.  It's at I-15 Milepsot 357 on the very north end of the ever-daunting Salt Lake City metroplex gauntlet.  SLC's gauntlet ends right about Milepost 250 at Payson, Utah.  This year, we made the run through the gauntlet in a mere hour and forty-five minutes.

We had only one minor incident when we could not avoid a chunk of blown out tire.  There was no way to swerve to miss the hazard without risking losing control of the truck and trailer and/or hitting one of the vehicles flanking us in adjacent lanes.  So, we had to take the hit and hope for the best.

Luckily, the tire chunk didn't damage Annie (the Big Chevy C2500 pickup) but it flew up and left a real nice dent in the left front of the trailer trailer, complete with black tire marks.  Even though we were slightly bummed about this minor damage, we were very thankful the chunk didn't go under the trailer and wreck havoc with pipes, wiring and possibly even the innards of a wheel backing.  We'd much rather have a dent in the front that deal with serious destruction underneath.  Also, those tire chunks can cause a sudden blowout if they hit a trailer tire “just right.”  So, all-in-all, it was OK.

The SLC traffic was it's usual chaotic NASCAR-style, willy-nilly cacaphony of meyhem.  Basically, we get through it by staying in one lane, gripping the wheel with white knuckles and silently reciting “The Lord's Prayer” a few dozen times.  Once we are off I-15 at the Payson exit, we can exhale, inspect damage and walk around and relax for awhile.  It's always such a relief to get through that gauntlet.

After SLC everything else seems casual.  This year we hit The Sevier River Canyon at the peak of Fall Colors.  What an incredibly splendid spectacle!  We didn't stop in Panguitch as usual since both our intuitions were telling us to get to Bryce as fast as possible.  If we would have stopped in Panguitch we wouldn't be sitting in Sunset Campground this morning that's 100% for certain sure.

We're delighted to be back at Bryce.  We love this place...everything about it. 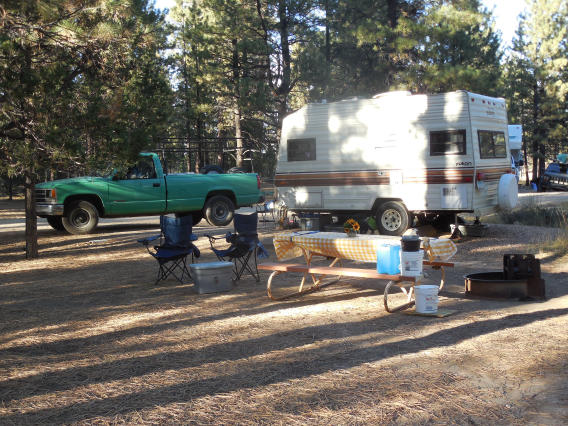 Thanks for reading!  Have a Great Friday and Many Happy Cheers, John & Susun.

(2 pm update) Bryce is Nice but Bryce is also jam packed with people today.  Turns out it's the Utah school system's Fall Break.  Our first hike on the Navajo Loop and Wall Street was kinda like going to an elementary school rowdy recess on a packed playground.  A ga-zillion kids scurrying helter-skelter every which way including loose.  It was actually kinda fun in a different sorta way.  We've been on those two trails when there's been nobody else there.  That's nice, too.  But it was fun to see all the kids being kids.  We've definitely never seen this many frenzied, free range kids at Bryce. 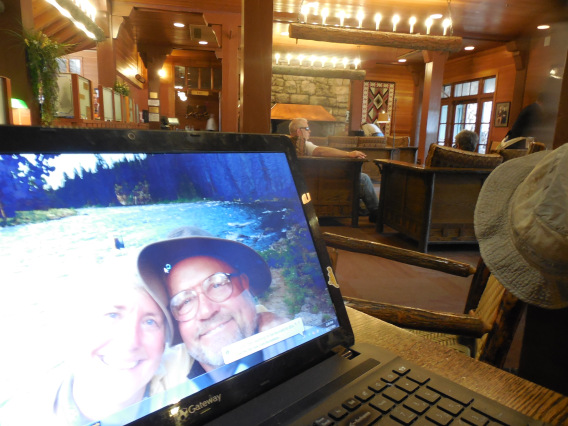 Turns out it's a good thing we walked from our campsite over to Sunset Point.  The parking lot was totally full and there were NO spaces whatsoever.  Chances are the crowds will thin out tomorrow as everyone heads home so they can attend church on Sunday.  At least that's our theory.

(3 pm update) Bryce Lodge is only a 15 minute walk from our campsite.  So we loaded up the laptop in our backpack and headed to the Land Of Free Wifi. Unfortunately, the Lodge's WiFi speed is really slow this afternoon.  Won't be able to post more then a few photos, if we're lucky. 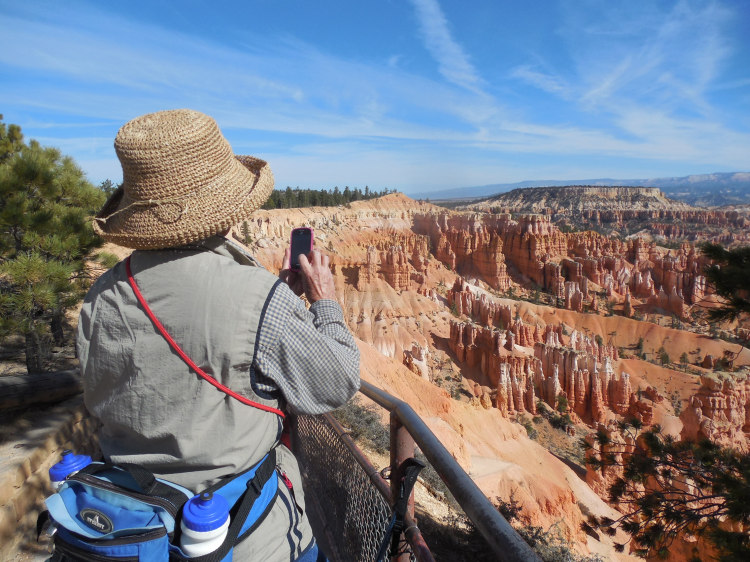 After trying several tricks, we may have been able to get today's hiking photos posted:

What fun! Thanks for inviting us to tag along!