Alvie Self was featured in the local newspaper this week.  It's a great article.  We are so proud of The M Diamond Ranch for featuring Alvie for the past 10 years.  The M Diamond has a very special event coming up tomorrow, as described by Peggy Ingram:

"We are featuring “Turkey Buzzard Day” March 29, as part of Arizona History and Heritage month.  This evening celebrates the return of the turkey buzzards to Beaver Creek, with a song by Alvie Self, special entertainment by the Verde Valley Fiddlers, and real chuckwagon cooking with the Cannon Family Chuckwagon.  Please call 928-300-6466 for details and reservations.

You’ll sing along with Alvie Self, a member of  both the Western Swing and the Rockabilly Hall of Fame, and his acoustic guitar and fiddle. He’ll sing you some cowboy songs and play your requests.  Alvie has been playing and singing at our evening cookouts for 10 years, and people love him (so do we!)"

Occasionally, local folks get a special discount for festivities at The M Diamond.  Give 'em a call! Below is Alvie In Action at one of The M Diamond's famous dinners. 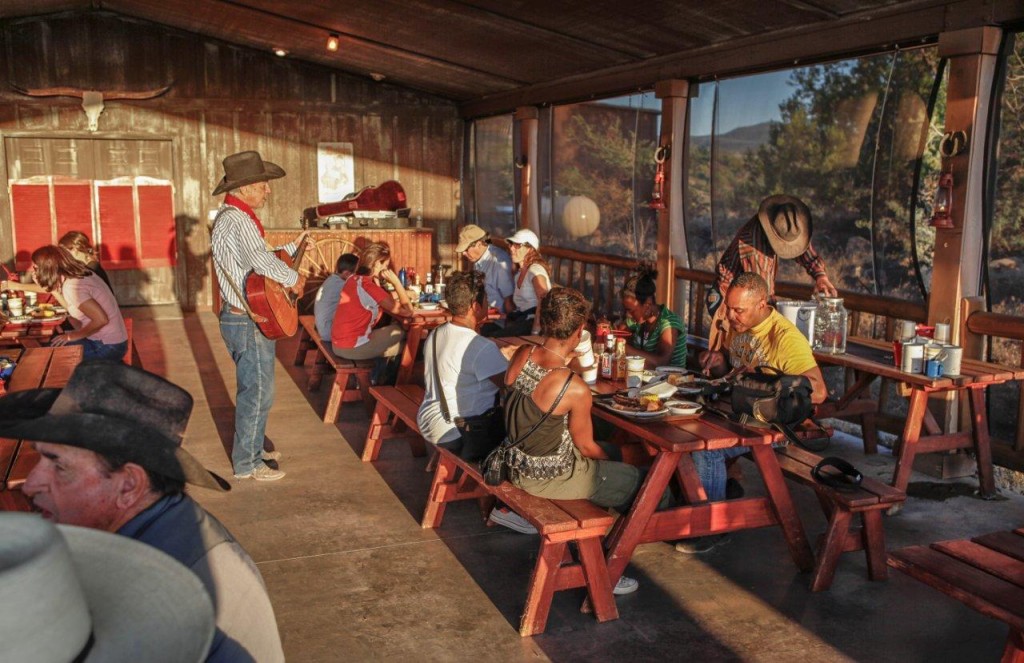 Normally, as you know, we normally write an introductory narrative above our lead item.  Today, we wanted to give Alvie and The M Diamond the spotlight without any distracting narrative above.

Most of our items today are local.  The longest item today is about Betty Boop and that's quite a story in itself.  We mentioned that our blog readership took a precipitous decline this week.  Our weekly Friday statistics bear this out.  During the past 7 days, daily readership was 13 but the most telling decline was that those readers only averaged one minute, 42 seconds visiting this blog.

That tells us (or implies to us) a couple of things.  First, the Morning Edition is out-of-touch to the bulk of our potential visitors.  Second, it is almost certainly too long to be of interest to all but a few Loyal Blog Readers (LBRs).  We have heard many comments since January that the Morning Edition is too long and people simply don't have the time to read it.  Even Sweetie Susun says so.

So, why do we continue to make the Morning Edition so long? We've said it before and we'll say it again: This Morning Edition is first and foremost for ourself (AKA: Me, Myself and I).  It's something I dearly enjoy doing for the pure fun and entertainment of it for Me, Myself and I.  I am not doing this Morning Edition to draw large amounts of readers.  Although I find the daily and weekly statistics interesting, they are NOT my driving motivation to aggregate the various stories you see in these editions.

The daily production of this Morning Edition brings to life The Journalist in me.  That's what I studied in college and that was my first career.  I have always loved journalism and always will.  Finding great Fun Stuff stories brings joy to my Spirit.  I love finding stories that bring a glow to my Heart or a tear to my eyes.

In the really old days of journalism there really was something called "The Wire."  The term "Wire" harked back to when news actually came to various newspaper by telegraph, sent by beady-eyed guys tapping a telegraph key in Morse Code.  When I was a Young Pup, The Wire was a teletype machine that spit out uncounted yards and yards of narrow yellow paper.  The teletype machine made a terrible racket in the newsroom but it was actually a welcome racket to those who called an old newsroom home.

In every newspaper, there was one person designated as "The Wire Editor."  It was that person's job to watch The Wire and find stories suitable for inclusion in the next or an upcoming edition of that newspaper.  If you look closely at virtually all newspapers even today, you will see that the majority of their content has been "picked up" from some other news outlet.  There is simply no way for 99% of newspapers to generate enough locally-produced content on their own to fill a typical edition of a typical newspaper.

Some news professionals still refer to the now-arcane term "The Wire" but it's rapidly falling into oblivion.  The internet isn't a wire, even if wires do actually make up the guts of the internet.  Content simply streams into news outlets these days and someone in each news outlet scans and reviews it looking for those morsels that may interest local readers.

And so it is that I am kind of a hybrid cross between a throwback to Charles Kuralt and an old-fashioned "Wire Editor."  Exercising my journalism genes is a very fun thing for me to do.  That's why I am doing these Morning Editions.  I won't always be able to do one every day and as summer approaches, their frequency will decline.  But, trust me, I love doing them, even if I am their only reader.

Yes, it would be nice flattery if the Morning Editions had more readers but it isn't necessary and it doesn't dim my enthusiasm for this reawakening of my inner journalist.  It's just something I do and you're welcome to enjoy it...or not.

Our first story is about the historic release of Colorado River water to run free to the sea.  We picked this media feeding frenzy foto because it somehow seemed appropriate in the context of our remarks above. 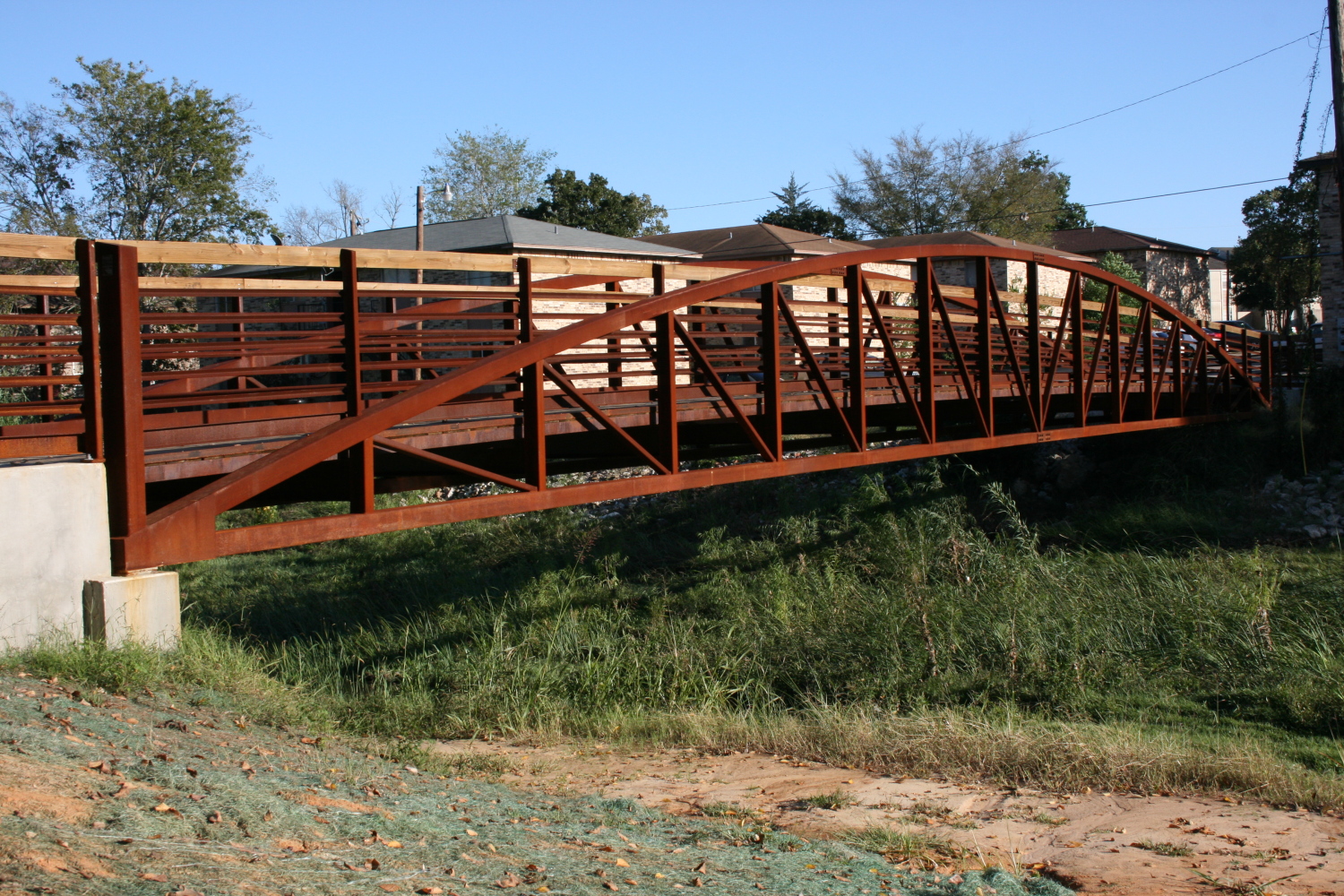 Yavapai County is going to spend $485,000 to build a bridge (similar to the one shown) across Wet Beaver Creek.  Here are the details: 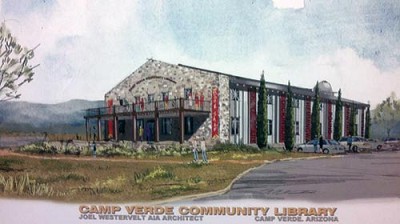 Friends of the Camp Verde Library have been trying for almost an entire generation to get a modern library for their small town.  I can't even remember how far back those efforts go.  I remember hearing people talk about it in the early 1980's and got the drift it has been a topic long prior to that time.

Back in 2002, I was even approached and offered $12,000 salary to be a fund-raiser to try to jump start a new library.  That's back when I wanted nothing to do with gainful employment so I said an emphatic "NO" to the offer.  Somehow, someway, it is beginning to appear that a new library for Camp Verde really, truly might actually be happening.  This particular design started out at 27,000 square feet when the first conceptual drawings were released in 2007.  Now, it appears the final rendition will be 17,000 square feet.  Luckily, a local native was chosen to design the library so he has stuck with it because of his deep roots there.  And, luckily, Joel's concept for the building has remained intact even if it has been considerably downsized.

We all have had the forever fear that the powers that be would simply make it a pole barn.  Thank Goodness that isn't happening.  As you know, we believe libraries are the eyes to a community's Soul.  If this library comes into reality as envisioned, perhaps we can say that Camp Verde's Soul is undergoing a metamorphosis into a New Age of Enlightenment!

Joel's first drawings of the library from 2007 are here: 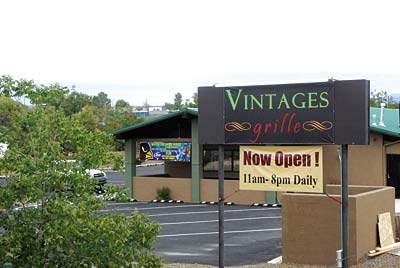 One of the finest businesses in Rimrock is the Vintages Grille, operated by Kathy Chambers.  It's such a Gem in our little rural community.  Everyone here is so proud of Kathy Chambers for "making a go" of the restaurant business here.  Today's Camp Verde paper did a nice write up on Kathy.

This is part of a series where the Reporter asks well known local people the same set of questions.  The two questions which elicit the most interesting replies are "What would be your last meal?" and "What was your most embarrassing moment?"

Most folks take a "pass" on both of those questions.  Perhaps the idea of a last meal is unsettling to them.  Also, the vast majority of people interviewed don't want to own up to their most embarrassing moment.  Kathy stood up to the plate and took those two fastballs and knocked 'em plumb outta the park!  WAY TO GO, Kathy! 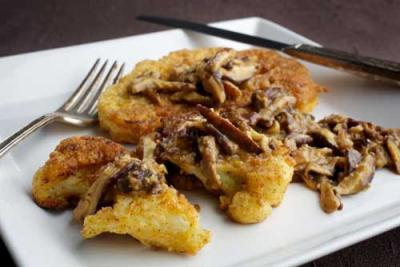 Speaking of food...Yesterday we used the Random Point Generator.  We picked Sacramento as the starting point and asked for 10 points withing a 200 mile radius of the California Capitol.  Lo and behold, up in Eureka, California, we found a recipe for Chicken Fried Cauliflower.  Yes, that sounds like something that would come out of California's North Coast but the recipe actually apparently originated Back East.  Here ya'll go: 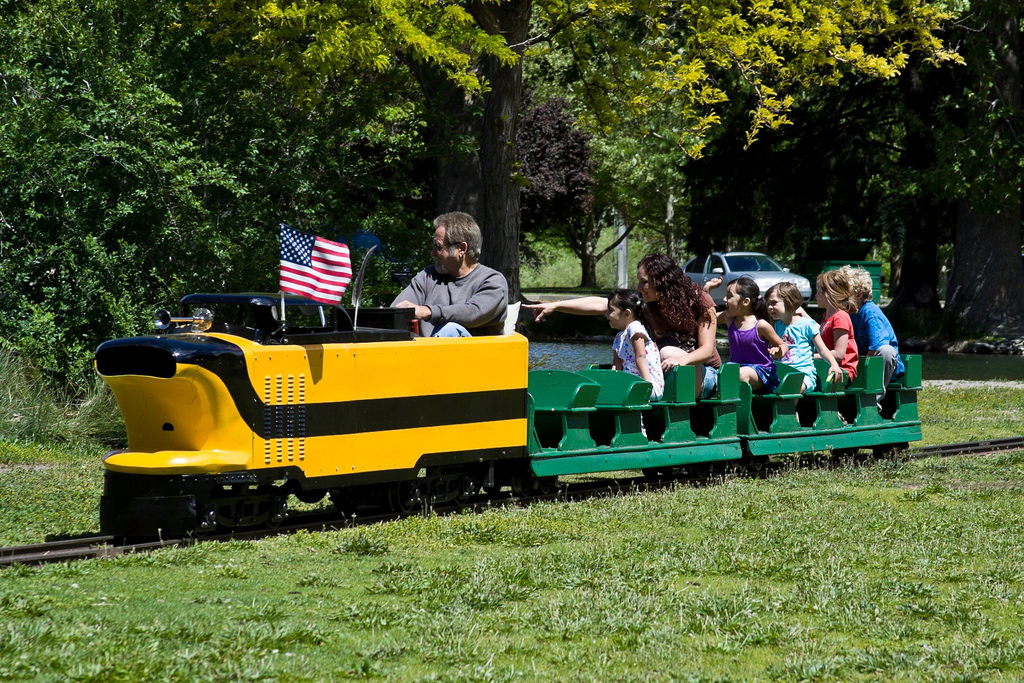 And so on our roam around the 200-mile circle from Sacramento, we came upon a note in the Reno newspaper about a little public train that is reopening tomorrow.  Tickets for this little train are only $2 so it is very affordable.  We became quite curious about the train and it led us into the Freedom Train as well.

Here is the beginning link which got us started: 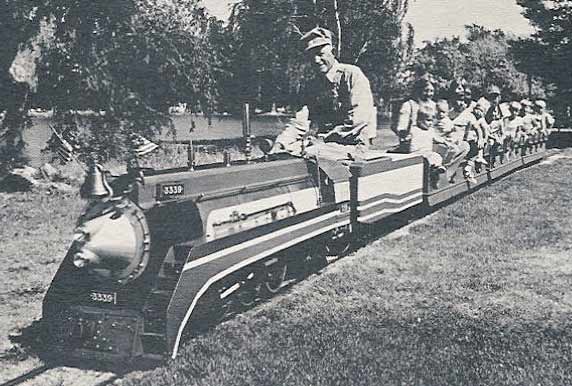 Somehow while searching for other photos, we saw that this train once operated in Reno's Idlewild Park.  What a beauty!  SO that led us into the Freedom Train. 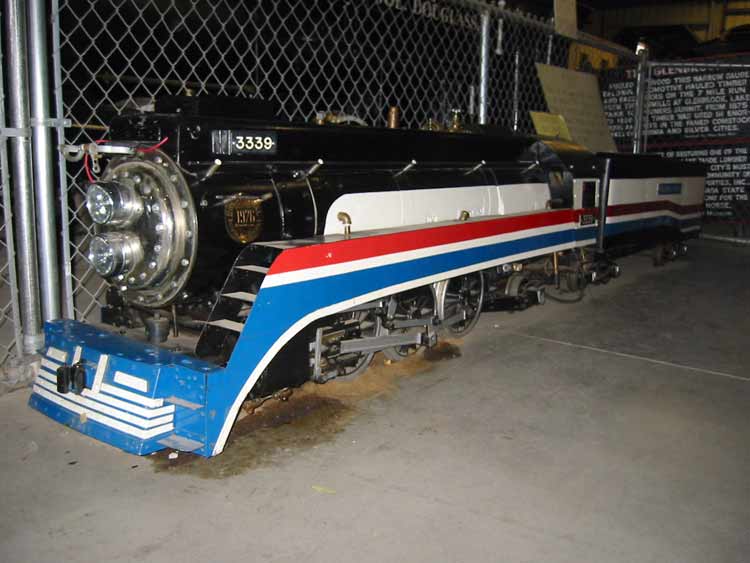 The train in the old photo above has been restored and now sits in the Nevada State Railroad Museum,

Here is the full scoop on The Freedom Train:

And, of course, that led us to Scottsdale's incredible "toy" train.  It's considerably more expensive to ride this train but, hey, you get what you pay for: http://www.therailroadpark.com/ 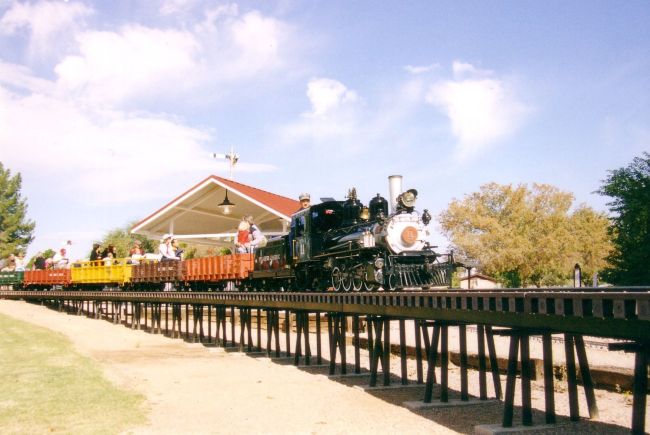 And so it was that we washed ashore in Chico, California, to peruse the newspaper there.  And that's where we found a short little article about a Betty Boop exhibit.  We spent hours studying Betty Boop yesterday.  Good thing we didn't stumble into that story this morning or we would have never had time to put together a Morning Edition! 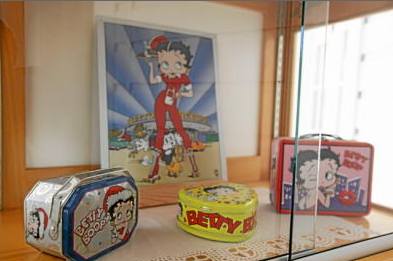 Here is a photo of items from the exhibit and below is the link to the story that got us started.

This Wiki on Betty Boop is one of the better Wikis we have read in a really long time. 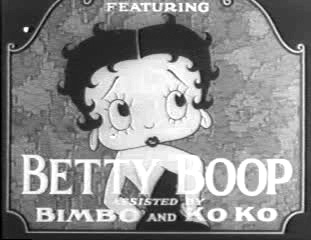 Above is a pre-censor-era look at Betty Boop 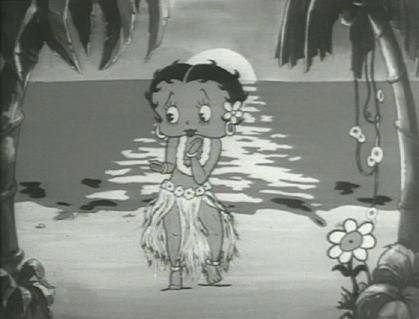 Believe it or not, Betty Boop actually appeared almost topless in one of her early cartoons.  We actually found the full cartoon from which this screen clip was extracted.  It's quite a bizarre cartoon and even somewhat surreal.  The audio in this copy is terrible but at least you can see the cartoon. Here it is:

Here is one of the comments under the YouTube of the cartoon:

"This is an incredibly significant cartoon. The Hawaiian music in the background is being played by Sol Hoopii who is using a 1927 Tricone resonator made by the National String Instrument Company. Hoopii, who was a god among Hawaiian steel players, set the tradition for use of resonator and electric lap and pedal steel in children's cartoons. The musical themes for Looney Tunes, Sponge Bob, and even South Park happened because of this film." 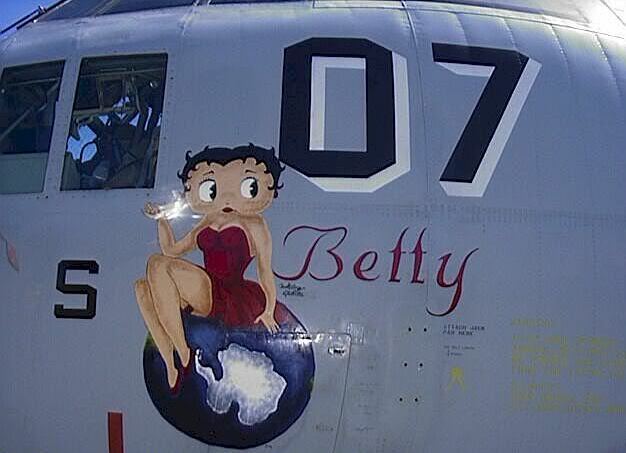 And Sweetie Susun wondered if Betty Boop appeared on the nose of various war planes.  Well, guess, what? Betty Boop has been to at least 4 wars on the noses of aircraft. (this one a C130 in Iraq)! 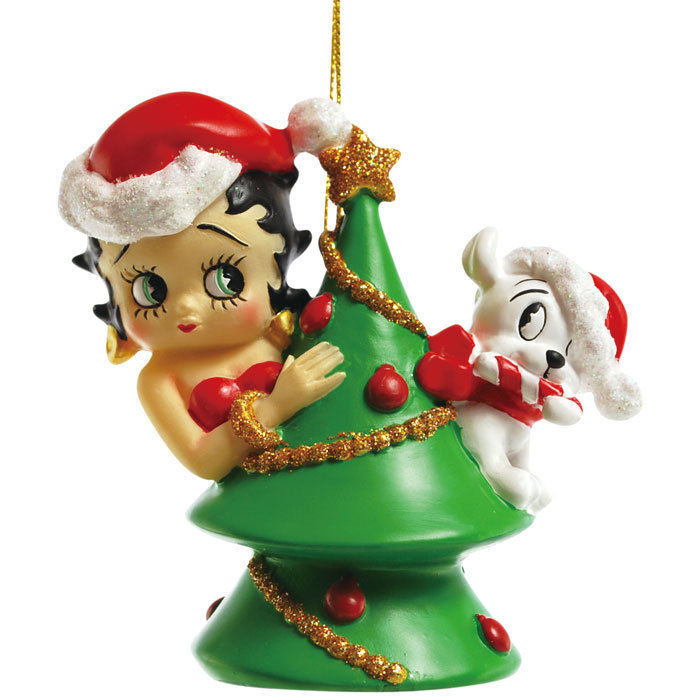 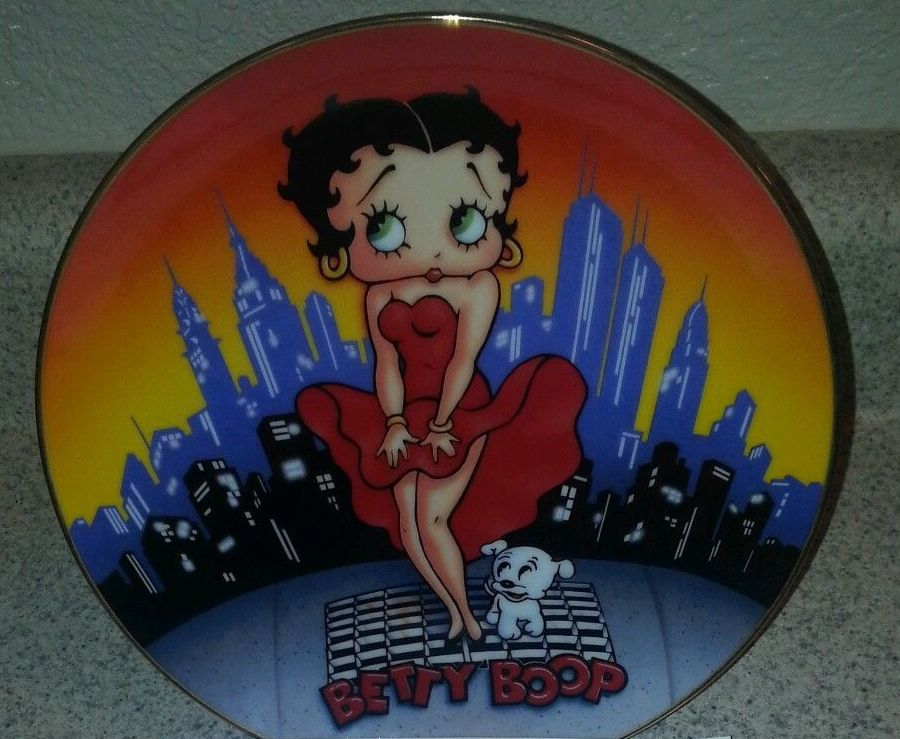 And, finally, here is a really rockin' and rolling' YouTube of a Serbian Girl Band named, what else?  Betty Boop!  http://youtu.be/4EeYbXUk574


It's entirely possible that Betty Boop is actually more popular with more people today than she ever was in her 1930's Prime!
Posted by John Parsons at 9:03 AM