Must admit we're dog tired this morning.  Phoenix trips Sunday, Tuesday and Thursday were all "go-go" high speed "git 'er dun" trips.  Yesterday was a very long and tiring day especially the one hour wait inside the cacophony of the MVD office in North Phoenix.  Anyway, being tired really slows down the compilation of a Morning Edition.  Everything feels like it is in slow motion.

We were coming back from a Camp Verde trip some days ago when we spotted the new sculpture in from of The Yavapai Apache Nation Cultural Office.  We did a startled double take and made a U-turn and took a bunch of photos.  This is a very evocative and emotional piece of public art.  The Nation has been trying to get this sculpture done for SIX years!  Their efforts started in 2008 and seemed forever in suspended animation.  Frankly, I had given up hope of ever seeing it as it now stands.

The second I laid eyes on it, I knew it must have been erected and dedicated for this year's "Exodus" commemoration on the last weekend in February.  I wondered about the story and hoped it would be told soon.  Luckily, the Camp Verde Bugle newspaper did a really nice piece on the sculpture in today's edition.

This quote shown here in bold italics was written back when The Yavapais and Apaches were forced marched to the equivalent of a concentration camp in the 1870's.  The quote provided the spirit behind many years of dreaming to get this awesome sculpture done right and displayed as a forever memorial to the will and spirit of The People of The Yavapai Apache Nation and their ancestors.

"One old man placed his aged and decrepit wife in a burden basket, with her feet hanging out, and carried her on his back, almost all the way. He refused help, except at stream crossings, where he allowed a trooper to take her across on his horse. Over the roughest country, through thick brush and rocks, day after day, he struggled along with his precious burden ... uncomplaining." 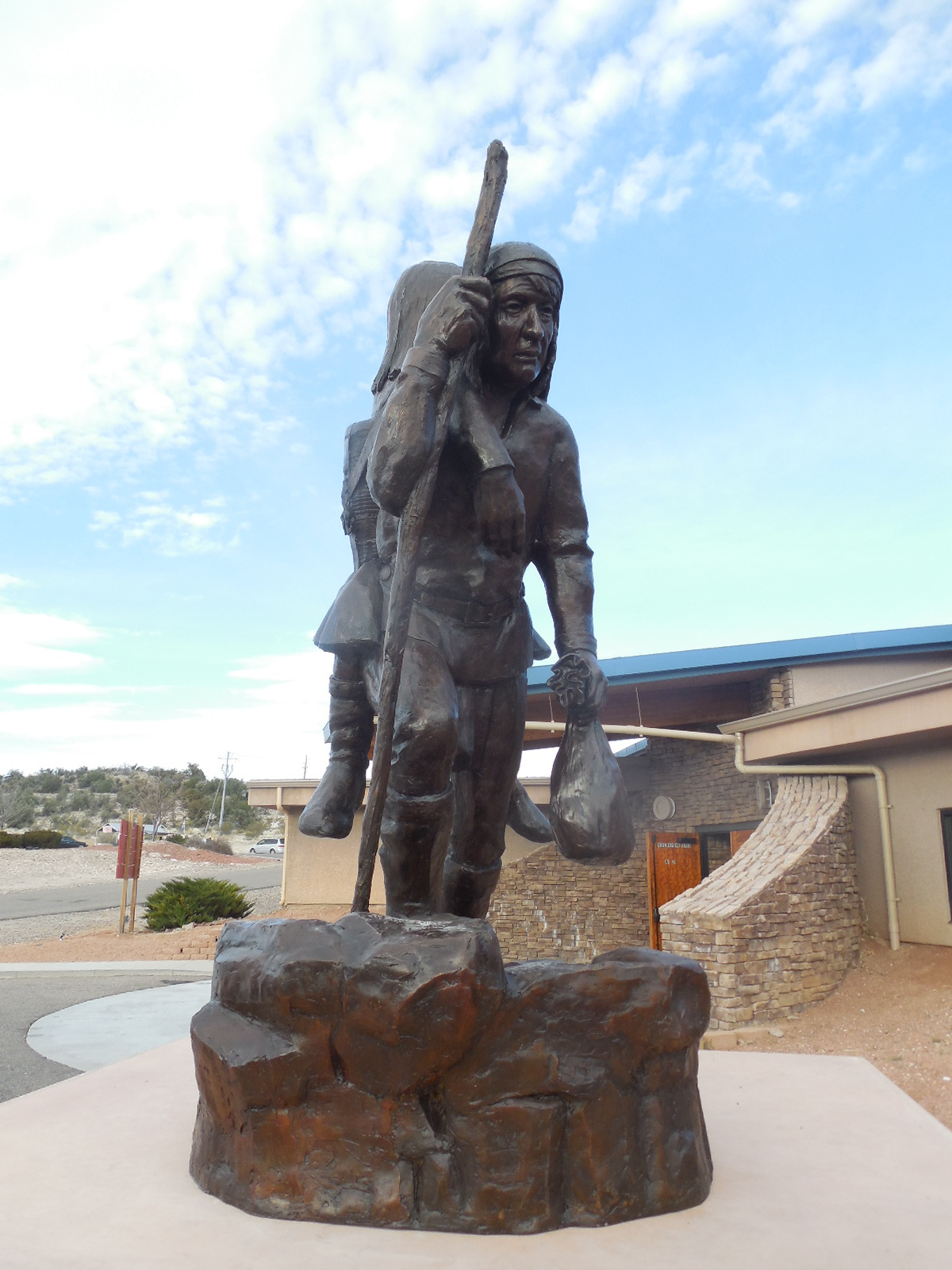 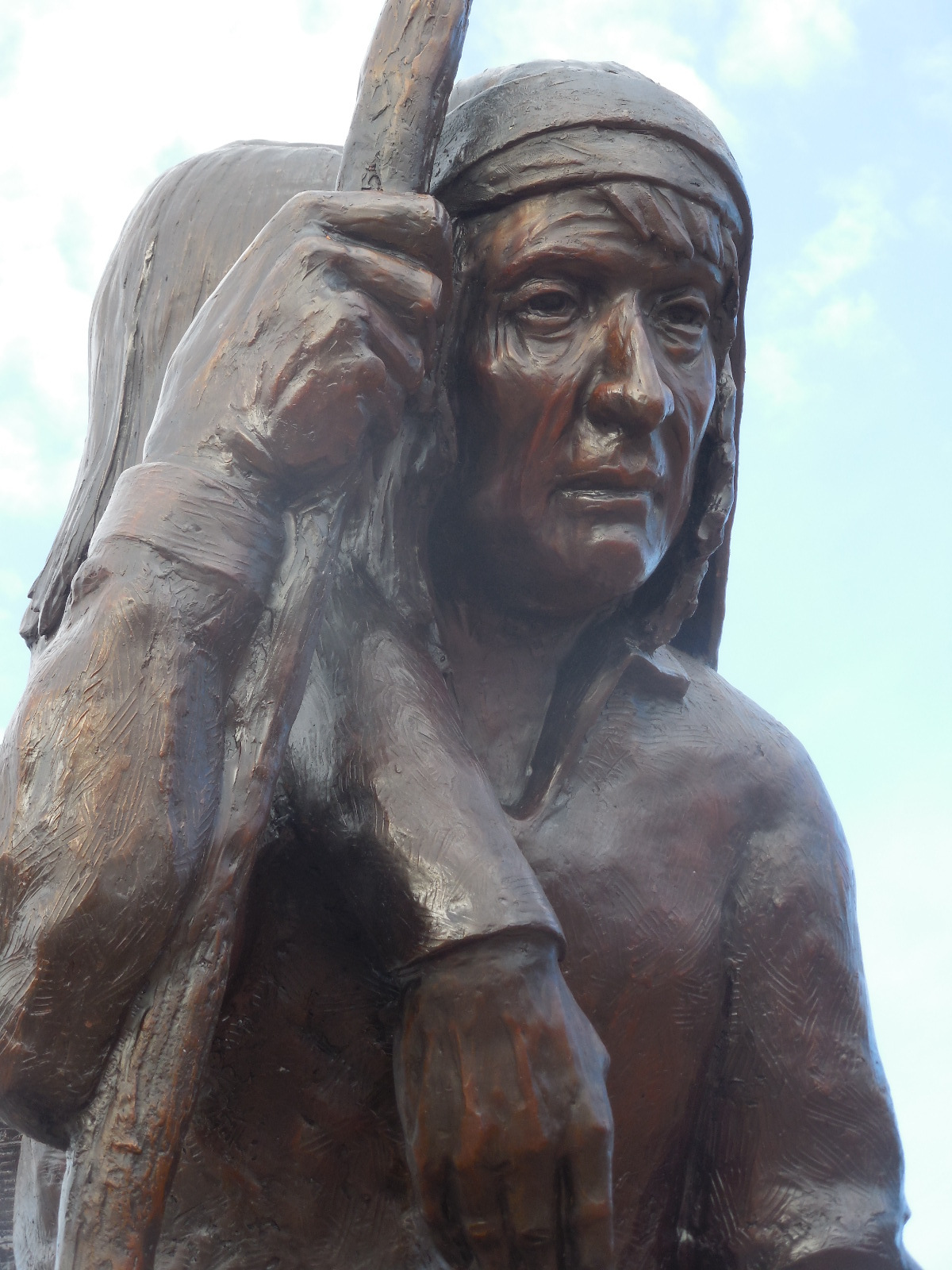 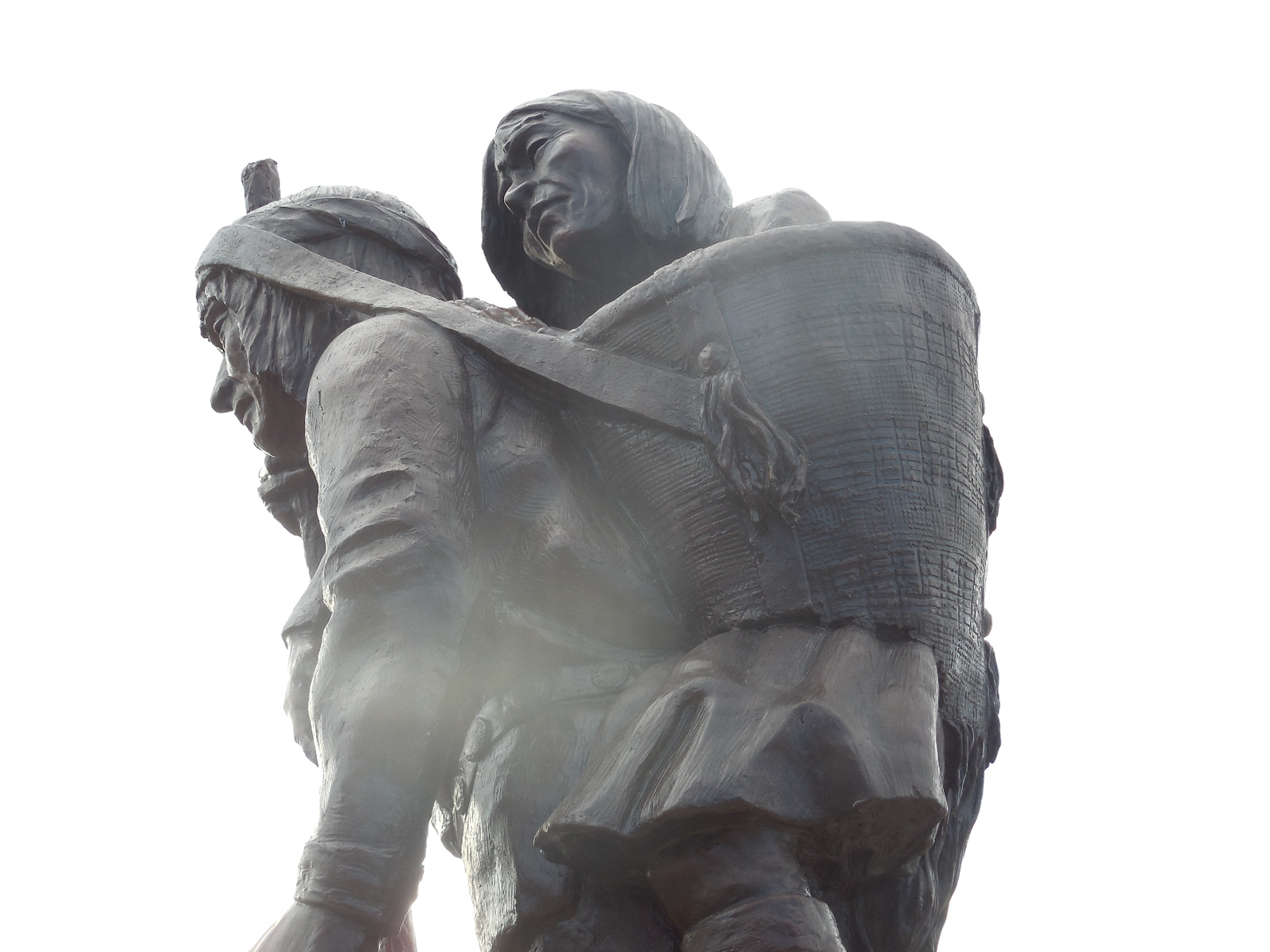 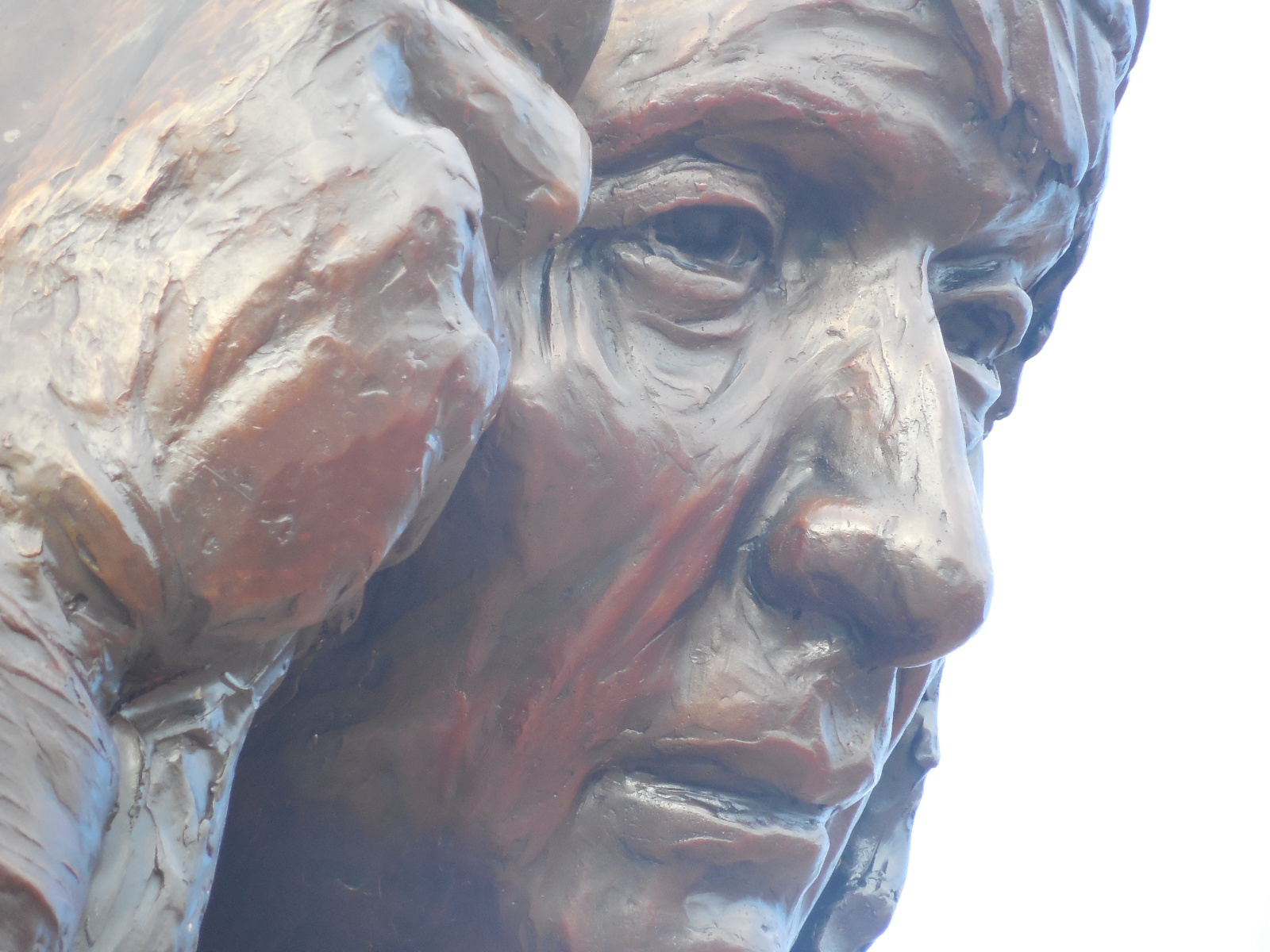 Some background on the sculptor:

Well, well, well...El Nino is coming baack!  That's the word that hit the streets yesterday.  Here's a key quote that showed up in many of the online articles about it:

Kevin Trenberth, a senior scientist at the National Center for Atmospheric Research, who wasn’t part of NOAA’s forecast, agreed that an El Nino is brewing.  ‘‘This could be a substantial event and I think we’re due,’’ Trenberth said. ‘‘And I think it could have major consequences.’’Halpert, however, says El Ninos can be beneficial, and that the one being forecast is ‘‘a perfect case.’’

Most news outlets carried identical articles.  Here's one from Boston that's identical to the next one from San Francisco.  The CNN "spin" on the story follows.  The fourth link is NOAA's official El Nino page. 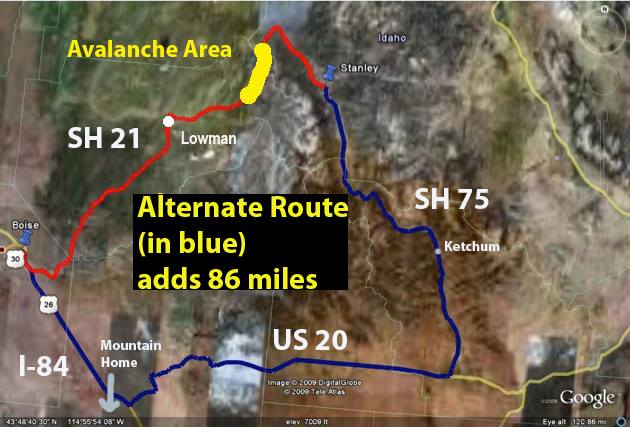 It's really amazing how the pendulum can swing from dry to wet in such a short time.  Here's a note from the Idaho Transportation Department about Avalanche Alley.

"A large avalanche in the 12-mile stretch of Idaho 21 between the Grandjean Junction and Banner Summit this afternoon (Thursday, March 6) will likely cause the highway to remain closed through the weekend as crews clean up snow and debris carried in the slide. This section of highway has been closed since Monday for an avalanche threat, and has been closed several previous times this winter due to slides.

The large slide came down in the closed highway area, ensuring safety for vehicles and travelers kept out of the area by avalanche closure gates. Drivers are encouraged to find an alternate route during this extended closure. The area has experienced more than 75 slides since the beginning of the avalanche season. More than 30 avalanches have reached the highway.

The notorious "Avalanche Alley" section between the Grandjean Junction turnoff and Banner Summit is home to approximately 60 avalanche chutes and 90 percent of the avalanches in the state that affect highways." 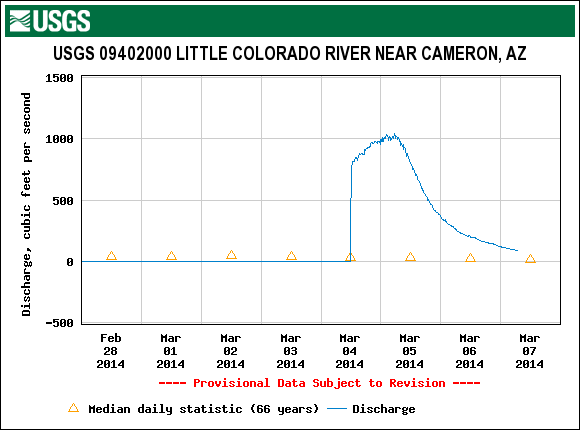 We mentioned there would be at least "some" water going over Grand Falls from this past storm.  It took its sweet time getting here, arriving Tuesday afternoon and peaking before dawn Wednesday.  Now, it's long gone again. 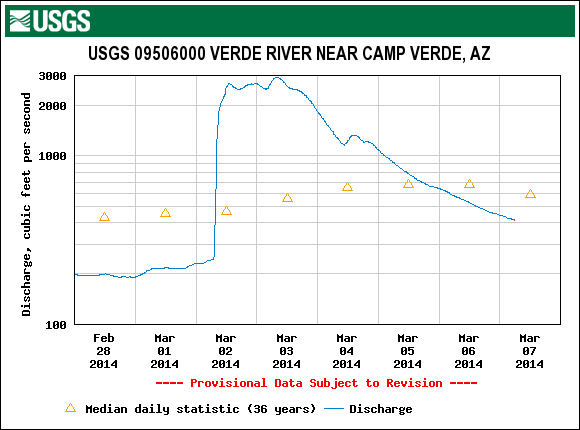 Here's how the Verde River behaved during the past storm.

And here's a nice story about The Pineapple Express and Utah. 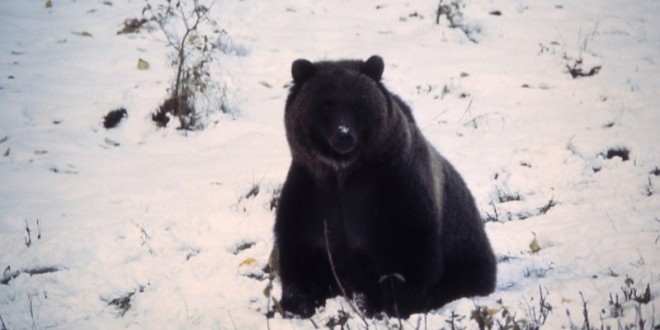 Even though it's cold and snowy up North, when the Bears Come Out, it's a sure sign of Impending Spring. 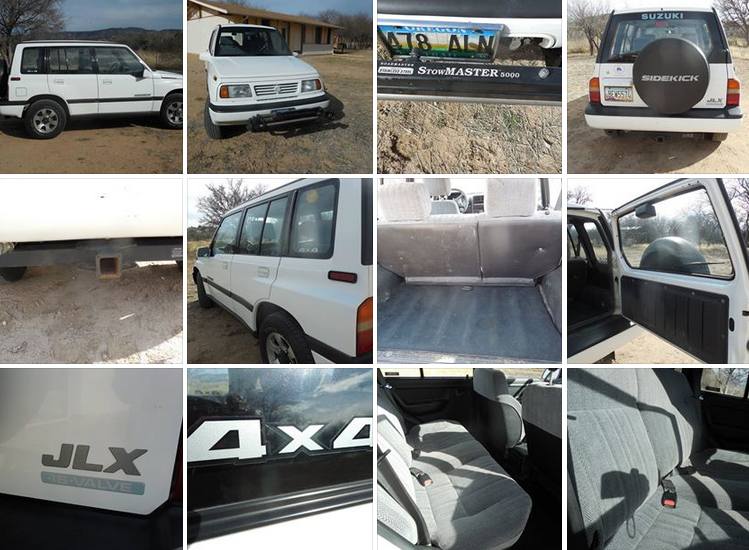 Finally, for purely archival purposes, we have included our Facebook photo album of Our New Sidekick.
As you know, finding older stuff on Facebook is next to impossible.  So, if we put the album here, at least we can find it when we need to look at it.

Hopefully, we will get an energy recharge and be back in the Morning Edition saddle again soon.  Getting this Edition together has taken us almost two full hours.  YIKES!  have a great day & Many Cheers, jp
Posted by John Parsons at 7:56 AM