Good Tuesday Morning!  Lots of links to share this fine early January day.  Let's start out with The Eagle.  No, not the rock group--we're talking real golden eagles here.  Dear Friend Joanna Dodder Nellans wrote a really fine report about the release of not one but THREE goldens near Mayer.  The story is awesome and there's some fine photos in the gallery, too, plus a bonus TWO videos.  Great way to start the day.  Link are below the photo. 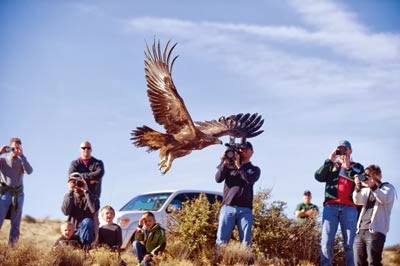 Ok, moving right along, how 'bout a story on a lucky llama that got to watch "Let's Make a Deal" on TV?

True story and here's the link to prove it:

Yes, Virginia, it's really, really C-O-L-D back there east of the Mississippi.  My Home Town newspaper provide a decent overview of how the Polar Vortex has been affecting Laugh-Yet, Indiana.

Going with the flow, here we have a New York Times article on The Colorado River's droughty future:

For all you many Farm Folk who dote on this blog, there's a dating website for you.  Who'd a thunk such a thing?

We might have to go to Yuma Friday.  Who knows who long we might be down there.  Looks like there's an event at the old Territorial Prison that could be worth checking out, even IF the admission price is a little on the steep side:

And sooo... how 'bout this plan--the online retailer Zappos plans to Zap all their managers.

Here'e a tale of some expensive Search And Rescue training gone awry at a mystery slot canyon deep in the West Fork of Oak Creek Canyon near Sedona:

By a long and winding road this morning, we arrived at NASA's Earth Observatory.  When all else fails to entertain you, perhaps these photos can brighten your morning.

A fun snow shoe story from the Jackson Hole newspaper.  When we lived in Snow Country, we quickly realized the only way to truly survive the winters was to embrace snow and cold and get out in it and have some FUN.  Snowshoes were our preferred method of fun back in those days.  That's why he found this story interesting and learned about the root beer, too.

http://planetjh.com/2013/12/30/get-out-phelps-overlook-death-defying/
OK, our coverage of the megaload continues.  Here is Laura Zuckerman's report from this morning's "Post-Register" in Idaho Falls.  (Copyright 2014) (Editor's Note: A Bonus Johnny Rustywire story appears below the megaload story.)

SALMON -- More than 100 people endured temperatures in the single digits late Sunday night to watch a rig weighing 901,000 pounds crawl through downtown Salmon and across the bridge over the Salmon River.

The rig, owned by Oregon shipper Omega Morgan, is on the last leg of a journey of more than 470 miles in Idaho. It is one of three such shipments planned in the coming weeks from Oregon into Idaho on a route that cuts through such cities as Arco, Leadore and Salmon.

The megaload got underway south of Salmon on state Highway 28 around 10 p.m. Sunday and approached the river bridge, the only road linking the city's east and west sides, about half an hour later. It was flanked by six Idaho State Police troopers.

The bridge was blocked by the megaload for roughly 45 minutes while it navigated a 90-degree turn off that structure and lumbered onto U.S. Highway 93 north toward the Montana line.

Anna Schroeder, 18, of Salmon was among the crowd that gathered for the late-night road show.

"I came to watch it cross the bridge; after this, I'm going home to bed," said Schroeder, who was wearing slippers and wrapped in a fleece-lined blanket.

A tow truck was staged west of the bridge to haul off any vehicles that might be chained to the structure by protesters who never materialized.

Numerous law enforcement and emergency vehicles were stationed on either side of the bridge so authorities and first responders could address medical crises, fires or other emergencies despite the blockage of a main artery.

Advance crews raised utility lines and temporarily removed some road signs in the path of the megaload, which traveled about 50 miles to park early Monday morning in a pullout on Highway 93 north of Gibbonsville.

It is awaiting permission to cross into Montana, where highway officials are reviewing a revised travel plan submitted by Omega Morgan in December.

Loads of the same size or larger are expected to crisscross Idaho in the coming months as the demand for supplies and equipment climbs along with energy production tied to the Alberta tar sands and the shale oil boom in northwestern North Dakota and northeastern Montana.

The Shoshone-Bannock tribes last week expressed concern about the megaload's impacts on their homelands along the Salmon and other Idaho rivers where they still exercise fishing and hunting rights gained by treaty. They said they expected "full and complete mitigation" linked to any damages or accidents resulting from the shipment.

Idaho has not required a bond for the megaload.

And, finally, we give you this short gem from Johnny Rustywire via Facebook.

i am trying to remember a story...about Jim Marshall... some time ago someplace down the road between Two Gray Hills and Newcomb this Jim Marshall came into the community...you started to hear stories about him and they were not good ones.....that one was a rough one...some said he was just born mean....i didn't know him but everyone talked about him whispering about him....that he was staying with one sister and then when her sister came to visit her he then ran off with that sister and moved in with her.....that when the first sister came to visit that he was so violent that he bit the tip of her finger off...i wondered how could such a thing happen now days...we are not living in the dark ages anymore....anyway there was a meeting at the chapter house and it was talk about him...Jim Marshall....i drove on down there and stopped at burnham junction to check the mail....i was inside getting a cold pop when i heard that Jim Marshall was there....outside of the place sitting in a pickup....i went outside and sat down drinking my pop wondering what he looked like this Jim Marshall....some said he was just plain no good....i wanted to see him but as i looked around i didn't see anyone around...he must have left when i was inside...so i left....i couldn't make the meeting and wondered what happened about the whole thing....after a week on coming back from a road trip i stopped at the chapter house and my curiosity got the best of me...i asked about him and what they decided to do with him...no one seemed to really care about it...i thought this Jim Marshall has sure got the community spooked and people must be afraid to even talk about him...so i went home....the next day i stopped at the burnham store and asked what happened with Jim Marshall....they said he ran way a couple of weeks ago and hasn't been seen around anywhere....i said that guy sure was no good from what i hear.....the ladies at the counter just laughed...i said how come you are laughing about the no good worthless person Jim Marshall....they then pointed to the bulletin board...and there was a picture of him Jim Marshall posted on there......he was just a dog....