Dear Friend Peter Corbett sent this photo of the Bowlus Papoose to use on Friday, January 17.  The little 700-pound trailer is to be sold at the Gooding & Company Auction in Scottsdale.  Narrative continues below photo.  THANKS, Peter for sparking our interest in this trailer.  Reading about this trailer finally motivated me to write about our Travel Trailer Pedigree.
We have had a nearly lifelong interest in travel trailers that dates back to the dawn of our earliest childhood memories.  Why's that?  Well, my Dear Dad was totally fascinated, captivated, mesmerized and hypnotized by what are now known as "tear drop" trailers.  Whenever Dad would see a tear drop trailer, we would have to pull over and look longingly and lovingly at it while Dad purred, cooed and generally drooled at the mere sight of one.  If a human owner of the tear drop was nearby, Dad would insist on talking to the guy (it was ALWAYS a guy in those days of the very early 1950's) and seeing the inside of the tear drop.  Whenever Dad wasn't fawning over a tear drop, he seemed to be talking about them.  Sadly, my Dad would never own a tear drop trailer but I am guessing there were in his last thoughts when he passed away in August 1998.  I imagine Dad thinking perhaps he would finally get his very own tear drop when he passed through the Pearly Gates.

In any event, the "tear drop phase" of my life is instructive as to how it was that I became infected with travel trailers at the tender age of perhaps four or five years old, probably in 1951 or 1952.  As a tiny child in those days, tear drop trailer loomed large on my personal scale.  They looked like a great place to play.  Therefore in the mysterious ways of the human mind, I've always associated travel trailers with a "place to play."  And, yea verily, that's what we have always used travel trailers to do.

We've owned six travel trailers--at least as far as we can remember.  The very first one we bought was an ancient Barth which actually could trace its linage back to the Bowlus you see in the photo at the top of this post.  The 1934 Bowlus was the very first of its kind on Planet Earth.  The guy who built the Bowlus was the Supervisor of the construction of Charles Lindberg's "Spirit of St. Louis!"  All aluminum trailers can trace their linage back to the Bowlus.

Below is a photo of a mid-1960's Barth trailer.  Mine was a 1950's vintage a decidedly much more retro and cool in appearance. 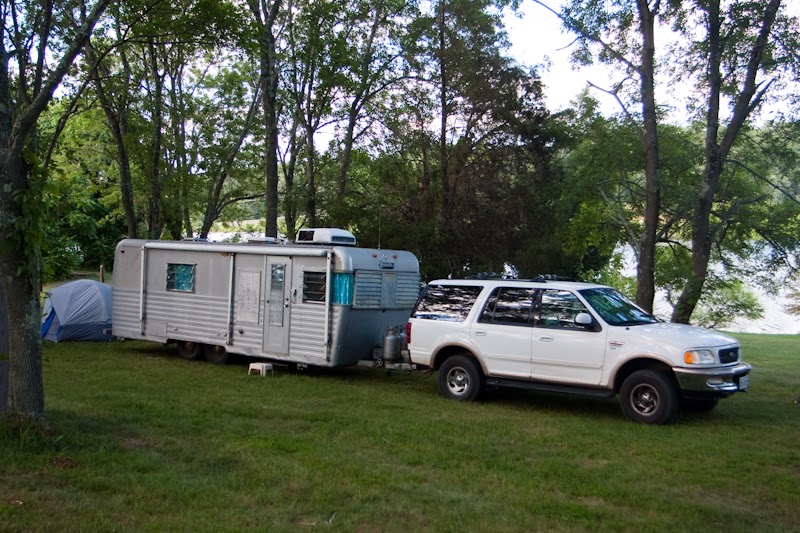 I bought the Barth for $200 in Camp Verde back in the 1980's and made it a Party Trailer that was parked right here where we live now.  Back then this land was vacant.  Eventually, I got in trouble with Yavapai County for "keeping a nuisance."  Meanwhile, Jodi and Dexter's sons Ryan and Reed were young adolescents and needed a place to live while Jodi and Dex built their house.  We loaned them the Barth and Ryan and Reed basically came of age in the old relic.

When Jodi and Dex didn't need it any more we towed it over to Blue Sky Drive in Cottonwood and the Barth was destroyed in the 1993 Flood.

After getting together with Sweetie Susun, she decided she needed a small travel trailer and she found "The Cave."  It was a mid-1950's vintage tiny trailer that perhaps measured 10-feet from hitch to bumper.  I think it was six feet wide.  When the first 1993 Flood hit in January that year, we were luckily able to tow The Cave out of the floodplain and save it.  When the second 1993 Flood hit and we had to vacant our mobile home on Blue Sky, we towed The Cave over here to Rimrock and lived in it for 6 months before upgrading.

In the fall of 1993, one of Susun's Sedona Friends hooked us up with a retired rocket scientist in Scottsdale who sold us an incredible 1974 Airstream for a mere $500.  We didn't know it at the time but the guy was quickly disposing of stuff.  He died perhaps 2 months later.  Anyway, being a rocket scientist, he had meticulously maintained the Airstream and it seem like a genuine palace compared to the tiny cave.  We lived in this trailer until our Straw House was liveable.

Meanwhile we sold the Airstream to a Grand canyon photographer, George Lamont Mancuso, who eventually died in a flash flood in the Little Colorado Gorge.  George was so happy to get that trailer.

One other trailer we bought but didn't use much was on behalf of my parents so they would have a place to stay when they visited Arizona.  It, too, was parked in the floodplain and destroyed in the February 1993 great Flood.

Shortly after the completion of our Straw House, Brad and Kate took us to Cholla Bay in Rocky Point for the first time.  We fell in love with camping on Sandy Beach.  For many of our first visits, we tent camped and, of course, the wind-blown sand was always a vexing issue.  That's when we decided to buy The Prowler, a 1972 behemoth.  There's a long story about how we found this trailer and who be bought it from.  It's s sad story so we won't tell it.

We would tow it to Mexico each fall and leave it with the RV park owner.  Before each visit, we would simply call the RV park owner and tell him to put it in our favorite spot.  Sure enough, when we arrived, our trailer would be sitting there all leveled up with the stabilizer jacks in place!

We camped in that trailer in Mexico and extensively around this area as well.  It finally became kind of a storage unit here at the Straw House.  When we sold the place in 2006, we gave the trailer free to Brad.  he eventually gave it to someone else and we now have no idea where it is.

Anyway, at that time we were in our Pop Top permutation.  Eventually, we tired of pop tops and bought a 24-foot late model Salem travel trailer in late 2006.  We would live in and out of that trailer until September 21, 2007, when we moved into our new 1939 bungalow in Idaho Falls.  In 2008, we sold the Salem to Friends in Custer County Idaho and they eventually sold it to someone else.

We stayed in tent and pop top mode until just this past week when we bought The Yukon from Yuma and sold off the pop top to a Bubba Boy from Union Hills.

As we have proceeded along writing this story, we realized there are many, many other stories that can be told about our travel trailers.  Dear Friend Terry M. expressed some interest in our "travel trailer pedigree" and this is about the best we can do with the time available on a fine mid-January Saturday. 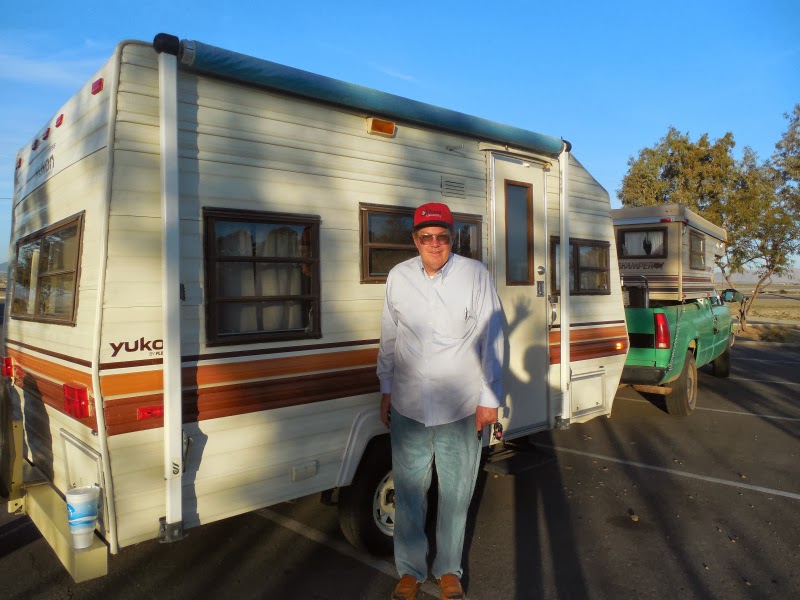 Bill Smith sold us the Yukon on January 10, 2014, in Yuma, Arizona.  Here Bill is shown in the Yuma MVD parking lot about 5:15 pm that day.  In the photo below KC (left) bought out pop top camper January 13, 2014 and was assisted in picking it up January 17 by one of his Friends. 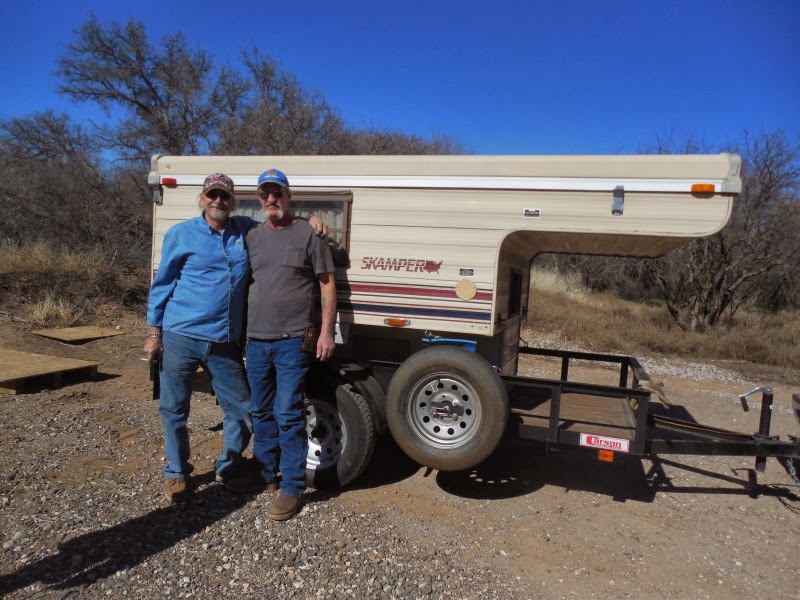 First we owned a Kencraft, then a cute little Argosy Minuet and then your nice little Salem. Each one suited our needs at the time and then each one found the next person who "needed" it when we had settled into something else. Funny how that happens. Always a move in the right direction.

The Prowler served several years here as Rancho El Chivito ranch HQ. It's copious storage held goat medications and supplements, show grooming equipment, milking supplies, herd record books and for a time even my small dorm sized refrigerator that was used for vaccines and meds that needed refrigeration.
When it was no longer needed, I gave it to a woman who had escaped an abusive marriage in another state with her teenaged son and moved to somewhere west of Flagstaff to start a new life with her sister's family. They were overjoyed to get it.