Rigging, packing and fiddlin' for our Road Trip went well Columbus Day morning. We stopped off at Fred Meyer to pay a bill and buy some last minute groceries. We departed the Freddie parking lot at 11:30 am. 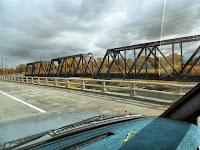 As we drove north on US Highway 20, we were lost in thoughts about the various floods of modern and pre-historic times. Crossing The Snake River on the Madison-Jefferson County line's Lorenzo Bridge, we wondered how far under water the area was when the glaciers melted. We mused the glacial floods would have made the Teton Dam Flood look tame.

As we crossed the tiny, placid, bucolic South Fork of the Teton River at Rexburg, it was hard to imagine the raging torrent that crashed through there only 37 years ago. On the left of the highway lies a picture-perfect golf course. On the right a seemingly mature riparian gallery forest crowds in on the narrow little stream they call the South Fork of the Teton River. 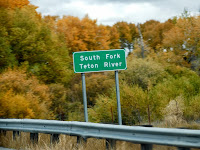 We smiled at a thought of untold hundreds of thousands of Yellowstone-bound tourists who have passed that spot in recent years without a clue as to the wrath of nature that swirled across this area back one month before our Nation's Bicentennial Celebration.

As we sorted through our wandering thoughts we took the wrong exit but it turned out to the the right exit. Why's that? Because the wrong exit took us down Main Street of Sugar City. Sugar City was totally destroyed by the Teton Dam Flood. The majority of the 14 fatalities recorded during this tragic event took place in or near Sugar City. 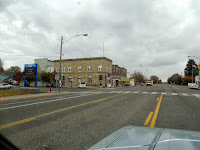 During the peak of the flood, our little old Nissan would have been well under water on Main Street as mobile homes, storage tanks, dead cows and the incredible detritus of destruction passed by on the surface of the water overhead.

On Columbus Day 2013, Sugar City looked just like every other small LDS farm town. Everything was neat a pin, children romped in the school yard, tidy houses, industrious people—the picture of normalcy. To us, at least, it seemed somewhat spooky driving along Main Street with all those indelible images of unimaginable chaos still in mind from our Teton Dam research over the past few days. 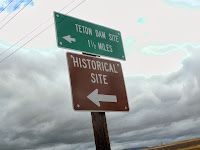 An estimated 50-million cubic yards of mud spread over farm fields in the path of the flood waters. Now as far as our eyes could see all the fields are in production of all of Eastern Idaho's typical crops.

The turnoff to the Teton Dam site is well signed and easy to see at Milepost 110 on Idaho Highway 33. The highway itself was completely rebuilt during the summer of 2013 and a new turnout was constructed for the state historical marker. The survey stakes were in place but the sign itself had not been reinstalled. 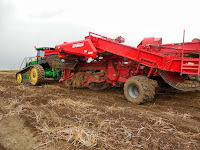 A 1.5 mile paved road leads to the overlook at the dam site. The road bisects gently rolling barley and potato fields. Shiny new John Deere and Spudnik potato harvesting equipment sat lined up beside the road, idled because of the rain storm.

As we approached the unkempt parking lot, we noted two other vehicles and decided to park far away from both. One was an older camper van with New York plates. A bushy-bearded burly bubba bustled about the camper van. Meanwhile, a shadowy character sat in his truck cab under a weather-beaten willow and this individual clearly wasn't interested in looking at the dam. We simply sat a safe distance away from both vehicles and waited until they left the area. As the camper van drove by the guy motioned for us to roll down the window. Luckily, he was only interested in the dam and asked, “Do you know anything about this dam? What happened here?” We told him its history in 50 words or less. He smiled, gave us a thumbs up and drove off. The other vehicle left about the same time. 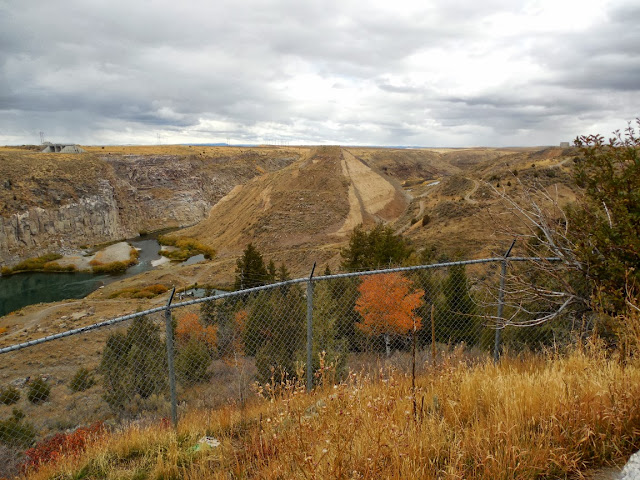 It seemed odd to us that there are no interpretive signs at the dam overlook. However, judging from the poor, vandalized condition of the concrete barriers, such signage would probably be destroyed about as quickly as it would be put in place. However, because of the missing Highway 33 historical marker, on October 14th, there would have been no way for a visitor to have a clue about the monumental ghostly remnants of a failed dam in the middle of nowhere.

The gloomy, overcast day set an appropriate background as we both stood at the graffiti-spattered overlook staring at a ghost dam. Indeed, if there are such things as ghost towns, then this is truly a ghost dam. 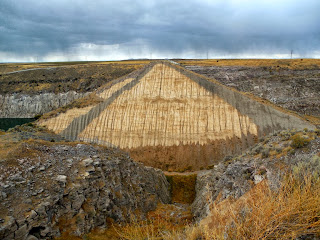 When we visit ghost towns, we often think of their heyday and all the people tending to business, family and the chores of daily life. Here at the dam site, we could only think of death, destruction, and the science fiction scale of a hydraulic nightmare beyond anyone's wildest imagination. We could only think of all the human effort in planning, design and construction—of all the time, money and dreams invested in this project. Our mind was filled with the echoes of tragedy, the multi-year clean-up and rebuilding efforts, the investigations, recriminations and now the strange quiet that lay upon this land.

The Teton Dam Site will remain for all time as a man-made geologic monument to engineering and bureaucratic arrogance; hydrological mismanagement and the local cultural myths that begat this dam in the first place.

Even though we were both peering into the looking glass of a civil engineering wasteland, we were both somehow momentarily transfixed by the scene. We wished we could decode the remaining visible evidence of that sad chapter in the Bureau of Reclamation's history. A cold wind kept us from spending even more time at the site.

We left with more questions than with which we arrived. Although it took us many years to finally visit the Teton Dam site, we will return at least once again to attempt to decipher the various abandoned elements of the dam and its operating components.

If you go to this haunting place, be sure to attempt to educate yourself beforehand. Although it is very sad to view the historic visual archives, such resources will help you grasp the enormity of the tragedy which took place June 5, 1976. Likewise, you will not leave like that puzzled New Yorker asking, “What happened here?” 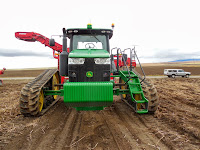 As we drove away from the Teton Dam site, we quickly changed our mood by stopping off at the idled potato harvesting equipment. These machines appeared to be brand new, totally state-of-the-art, GPS controlled space age apparatus. We joked, “This is where potatoes come from” as we prowled around and peered at arcane, incredibly expensive agricultural technology. We wished there would have been a friendly tour guide in bib overalls to tell us some potato jokes and explain all about how this stuff actually works. 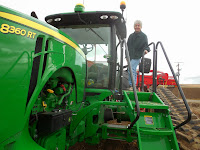 The inside of the cabs of these treaded tractors look like a cushy corner of a home theater room. We wondered what the operator would be watching on the digital display beside an instrument panel that resembled that of a small jetliner. Chances are the operator would be monitoring all of the computer data from both the tractor, the digging platform as well as his GPS location in real time in the field. However, we couldn't help but wonder if the operator didn't sneak in viewing a few Hee-Haw DVD reruns, too.


Susun gleaned a few small token russets and we proceeded on.

Click here for all 39 photos of this part of our Teton Valley Road Trip:

Great posting from an awesome itinerary!