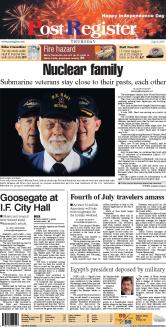 Here's the position of the story on the July 4th front page. 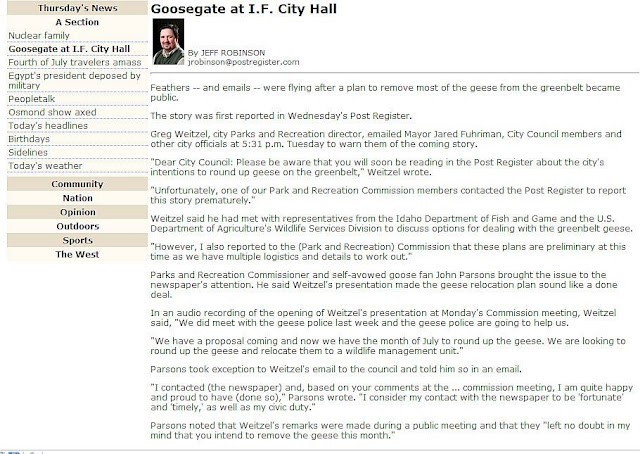 City to try to relocate geese

The Idaho Falls greenbelt soon could see fewer geese along the Snake River if a proposal to remove some of the waterfowl moves forward.
Parks and Recreation Director Greg Weitzel said a Parks and Recreation Commission discussion about relocating the geese to a wildlife management area about 100 miles away is in the preliminary stages.
The commission briefly discussed the idea Monday.
It won't be clear where, when or whether the birds can be moved until Weitzel receives a report on the proposal from the Department of Agriculture's Wildlife Services sometime this week, he said.
"I love the geese," Weitzel said. "I think that 50 geese are nice on the greenbelt; 500 geese, however, are not."
Weitzel plans to brief the City Council on the proposal, as well as a city ordinance banning residents from feeding the birds, at the council's July 11 work session.
Time is of the essence to move the birds, assuming the proposal is accepted by the council, Weitzel said, because the geese are molting and could not fly back.
Adult geese lose some of their wing feathers during the molting season, which takes place from early June to July. They are unable to fly during that period.
Commissioner John Parsons said the July 1 meeting was the first time the proposal had been introduced to the panel.
Parsons called the idea of removing the geese an "ill-advised misadventure" because so many residents enjoy the wildlife in Idaho Falls.
"I personally enjoy the geese very much," he said. "We moved to this city, in part for the greenbelt and the geese there. They're wonderful creatures."
Weitzel said the proposal was necessary because of overpopulation issues and the mess the birds leave behind.
"You can't even walk around down there," he said. "It's such a mess everywhere. We have to pressure wash and rake it off in preparation for July 4. With 500 geese in that small of an area, we have overpopulation concerns, which lead to disease.
"It's harmful for the landscaping, the water, the kids playing down there, and the physical damage is there, too."
Reporter Christina Lords can be reached at 542-6762.
The Canada goose
Geese eat 1 to 5 pounds of grass per day.
They produce about 1 to 2 pounds of waste per bird per day.
Adult geese average about five goslings per year.
The birds mate for life and stay together throughout the year.
They're federally protected by the Migratory Bird Treaty Act.
Source, Take Flight Goose Management LLC 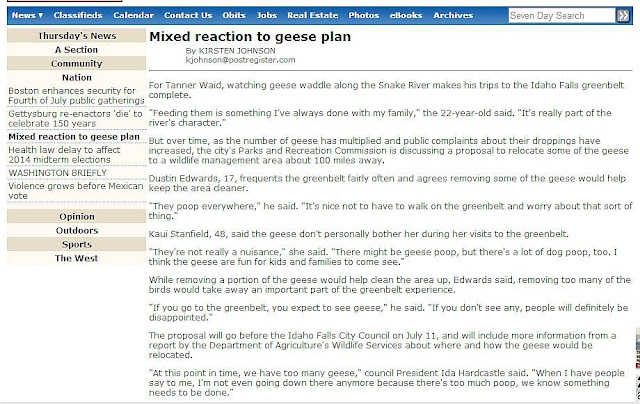