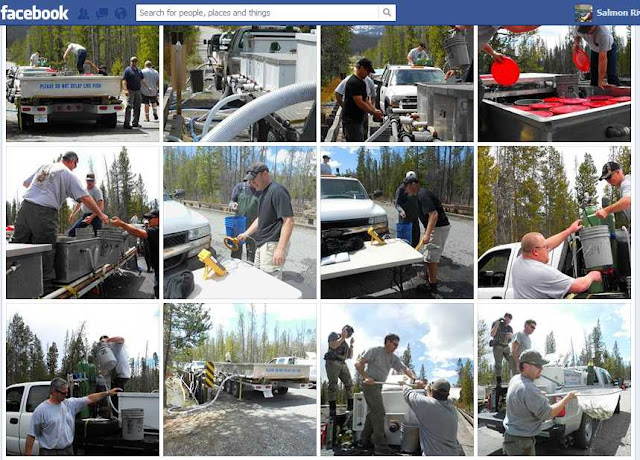 We've been on Spring Break with this blog.  Meanwhile, we've been putting huge energy into that Salmon Thang plus the Salmon Thang Facebook, PLUS actually going into the field in Salmon Country.

We're really proud of a couple of thing that happened this week.

First, we started a Peak Flow Contest for folks to guess the peak of The Salmon River flow at a widely-watched USGS gage called "The Yankee Fork."

We had dozens of entrants in the contest and guess, what, we won!  Of course, we're going to have to stay anonymous or else it would be a conflict of interest but, hey, guessing the peak of a huge river is awesome and we're danged proud of it.

Second, we did a photo essay on a very special event that took place May 9th and we got some really special recognition for it from The Idaho Fish & Game Sawtooth Hatchery.  They said, "Here are some great photos of the sockeye smolt release last week. Thank you Salmon River for documenting and sharing!"  That about as much of a compliment as you will ever get from those folks.  I was touched.

You can see the photos to which they refer here:

We're rocking and rolling up here and we just haven't had time for Da Blog.  Note that in our New Year's Day Bucket List we said:

We are SO Way On Target to meet that goal!

PS--Be sure to check out Wayne Ranney's four blog posts on his Canyonlands trip: