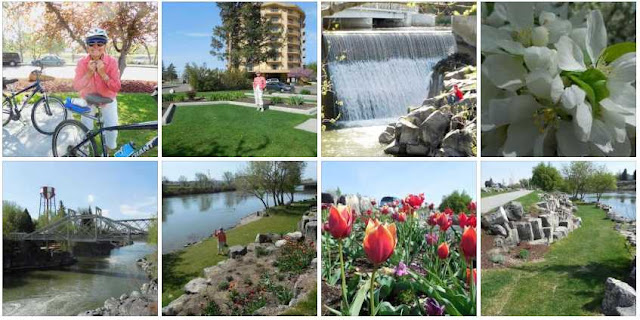 We enjoyed our first Sunday Bike Ride of this Idaho Season on Mother's Day.  Here's the link to look at the pictures shown in the screen shot above: http://goo.gl/zMGbI

Note that we have given up trying to use Google's Photo Album feature.  It's far too cumbersome and difficult compared to Facebook's albums.  For many years, Google had the slickest, fastest and best photo album function available anywhere online.  Now? Not so much.  We can get a Facebook photo album up and running and captioned in a fraction of the time it takes to mess with Google's complicated new system.  Somebody at Google apparently forgot the adage "If it ain't broke, don't fix it" and proceeded to totally gunk up what was once an elegantly simple way to present photos.  Sooo...that's why we're posting our pictures in Facebook albums.  So far, we have found no more effective (and free) alternative.
Posted by John Parsons at 6:26 AM