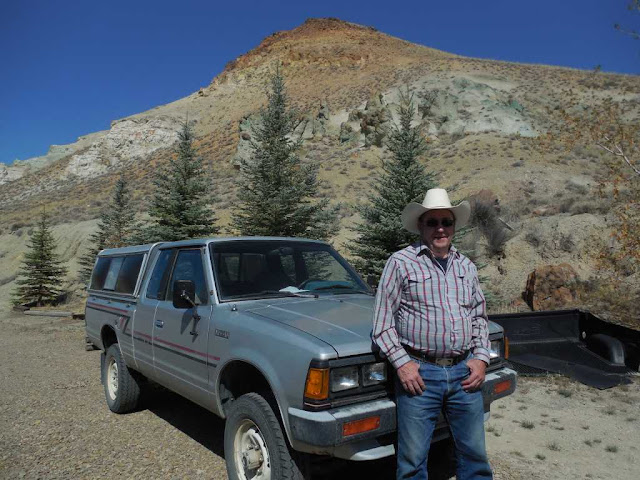 A Marvie Story. In 2004, we began our first of 4 summers volunteering at a remote Idaho back country hideaway called Bowery Guard Station on The East Fork of The Salmon River inside the Sawtooth Nat'l Recreation Area.

That's when we first saw "Marvie." It was on or about June 23, 2004, when we were driving downstream on the East Fork.  I saw the 1984 Nissan parked beside the gravel road.  Nearby out in a field was some guy adjusting irrigation pipes.  I jumped out of our government truck and ran sloshing out into the field.  I ran up to the guy and said, "Mister, you don't know me but yo're going to sell me your truck."  The man stiffened up to his full height and tipped back his cowboy hat and looked sternly at me and said real emphatically, "You sure right I don't know you and there's no way in hell I'm sellin' you my truck."

And that's how it started.  And it went on for 9 years!Marvie, the 1984 Datsun/Nissan kingcab 4x4. was then owned by Marvin Bricker. Marvin is a lifelong Custer County resident who was actually born on The East Fork. By and by we got to know Marvin and began pestering Marvin to buy his truck every time we saw him. Almost nine years have passed since then. Each and every time we've seen Marvin B. we've always said, "When are you going to sell us your truck?" Of course, Marvin was always a gentleman and politely say, "Well, John, I'm never selling you my truck." Periodically, when we'd see Marvin, we'd get excited and say, "Marvin, we had this dream last night that you sold us your truck."

Of course, Marvin, ever-the-gentleman, would tip his cowboy hat and say, "Well, you better stop having that dream, John, it's leading you stray because I'm never selling you my truck."

We kept it up, never failing to pester Marvin as the years went by. It didn't matter when or where we saw Marvin, we'd ask him to sell the truck or tell him about the dream and he would always politely decline.

Back in April, we were camped in Bryce Canyon Nat'l Park's Sunset Campground. We just returned from hiking in the hoodoos when the cell phone rang. It was Marvin. "John, I'm calling to tell you your dream came true and I'm gonna sell you my truck."

WHA-WHOO!!!!! More than 9 years of pestering, pleading and begging paid off! YES!
As soon as we could get situated here in our Idahome, we beat feet to Marvin's Place in Challis, Idaho, 155 miles from here. The truck was everything we always thought it would be and we struck a deal on the spot for Marvin's truck, if he could let it sit for a few weeks until we figured out how to pick up his pick up.

That's why we were in Challis Sunday and yesterday. Our neighbor Kenyon bought two tipis in Challis and we bummed a ride up with him.

So now you know why Marvie is named Marvie and, as Paul Harvey would say, "The Rest of The Story." THANKS, Marvin B. You're a Good Man and we Appreciate You!
Happy Trails! jp 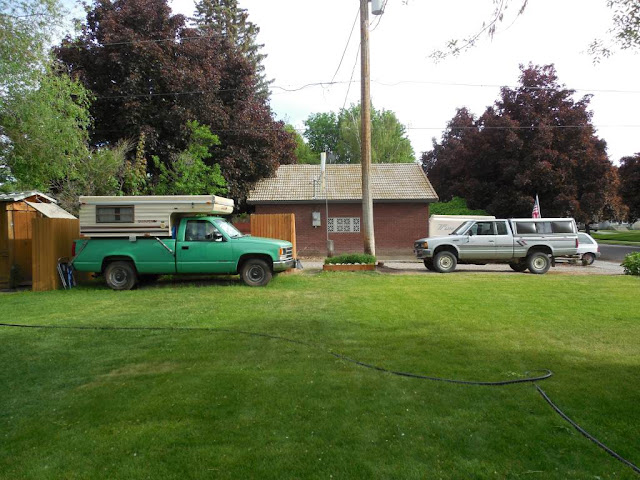 Marvie Meets Annie on Memorial Day 2013.
Posted by John Parsons at 7:41 AM