Welcome Back to Blogging 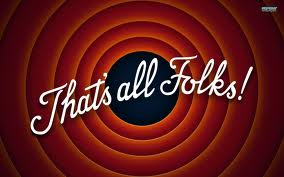 As you know, it's mid-March and a traditional time to begin to think about Spring Cleaning.  In keeping with the Spirit of Spring Cleaning, we've decided to sweep Facebook out the door and go back to blogging full time.  We've been tempted to put the graphic shown here on our Facebook but, nah, that's a little too Facebookie.  Anyway, that's your motto as far as Facebook goes is now: "That's All Folks."

We've been pretty close to hitting the wall with Facebook for the past few weeks.  Yesterday we finally hit the wall with it and we've signed off from Facebook indefinitely.  We won't even be checking book, so that says it all for astute.

Our own personal Facebook experiment began October 23rd and has thus ended effective March 16, just a little shy of 5 months.  We're not knocking Facebook for other people.

Surely, it must have some value for the one-billion people who use and appear to love Facebook.

So why are we leaving the fold?  It's just not for us.  It's a colossal waste of time for our particular lifestyle.  We are much better suited to be mere bloggers and we're returning to our roots here.

Note that we WILL continue to maintain the Facebook connected with That Salmon Thang, we're simply doing some Spring Cleaning and sweeping our personal Facebook out the door

Anyway, we feel a great sense of relief after having made the decision to eschew Facebook.

That's All Folks!  Many Cheers, jp
Posted by John Parsons at 3:26 PM

The prodigal son returns from the dark side. Welcome back