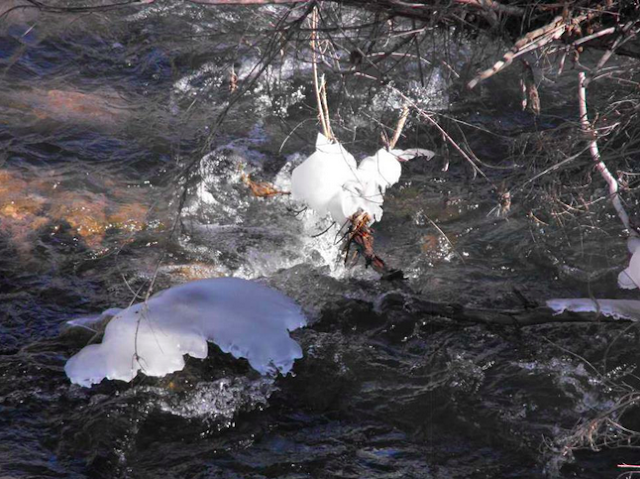 What you see above could be called a "Drive By Ice Pick."  Here's how it all unfolded.  We drove back from Williams on January 18th.  As we crossed the historic National Register Perkinsville Bridge over The Verde River, we stopped in the middle of the bridge.  I rolled down the driver's window and took the above photo of ice in the "middle" of the Verde River.

Anyway, the famous, vaunted Arizona Highways Magazine has this Facebook gig called "Friday Fotos."  Each week has a theme and they invite their Facebook Friends to submit photos fitting the weekly theme.  The Arizona Highways Editors pick 25 or so photos each week and put them on the magazine's Wordpress blog each Friday.  It's a real spiffy use of social media by the magazine.

Naturally, as you can imagine, everybody and their aunt, uncle, brother, sister and family dog and pony is trying to get their pet photos shown on the Friday Foto Feature.  It has grown hugely popular and have become a awesome new venue to showcase some stunning works by unknown photographers.  I actually dote on that Friday Foto thing and can't hardly wait until it comes out each week.

Well, this week's theme was something like "Ice in Arizona."  I figured I had nothing to lose so I might as well put the picture into the hopper just for the pure heck of it.  Lo and behold, the Arizona Editors made it a pick for Friday Fotos.

That's how the photo came to be known as a "Drive By Ice Pick."  Ice picks will now never quite be the same to me from this point forward.

Anyway, I am honored to have been chosen, especially when you see the much better quality of everyone else's pictures.  That my lowly little foto would be chosen to sit among such stellar shots really makes my day!  Here is the Arizona Highway Friday Foto gig: