How cold is it?

It's C-O-L-D!  We're talking the type of deep, bitter cold that just seems like it never ends.  Where?  Salmon, Idaho.  So, how cold is it?  The best way we can relate to you just how cold it is there is to talk about The Salmon River Ice Jam.  This thing is like a weird monster, a strange creature, and it just keep growing and getting bigger and more dangerous.

So, how big is it?  Well, are you ready?  It's TWENTY FIVE MILES LONG!  It's clogging the river from an area known as Deadwater almost all the way upstream to the Salmon, Idaho City Limits.  It started growing last Sunday-Monday and it hasn't stopped spreading.  Unless the temperature releases its grip on the area, the ice jam is almost certain to cause some flooding problems in Salmon, Idaho.

Now, folks, when your city is threatened by an ice jam stretching as far as from Rimrock to Jerome, Arizona, hey, you've got a problem.  We're not talking a garden variety ice jam here.  We're talking a monster!  Idaho Falls has been in the same grip of the cold weather, too, but at least it doesn't have to worry about an icy creature coming out out of the Snake River and wrecking havoc on the city.  YIKES!

Below is the 14 day temperature chart for Salmon, Idaho.  Note that the weather was actually quite nice until a week ago.  That's when the bottom dropped out of the thermometer.  Temps are progged to warm up late tomorrow.  It remains to be seen how this will affect the Ice Jam. 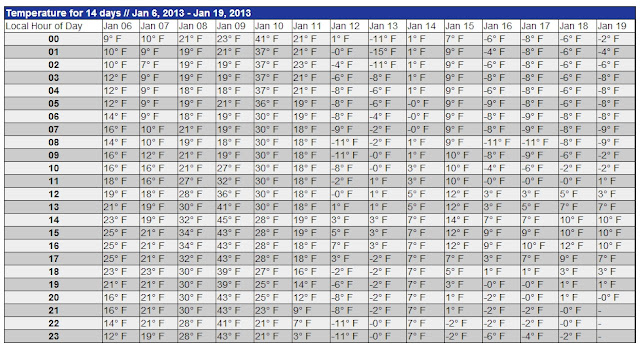