There's plenty of wildlife here and only a little bit of it during Happy Hour and the evening campfire.  Last year was kind of bleak for the wildlife.  We didn't see certain species here at all.  This year it's better already.

So far, we've spotted two mature white tail does, two really huge javalina boars, roadrunners and a large covey of quail.  Last year the javalina and quail were totally absent.  There are the usual nocturnal raccoon tracks in the dust and there might be a roaming bobcat.

The NPS game camera captured a photo of a mountain lion last year and we've seen their scat out in the Old Field so we know they are out and about. We've only heard one coyote wailing at the night sky--that's rather unusual, normally they have a Holiday chorus going this time of year.

It's been a few years since we've seen elk out in the pasture.  There's a resident red-tail hawk that flies low over our straw house and it's always fun to see the bright red cardinals flitting in the mesquites. 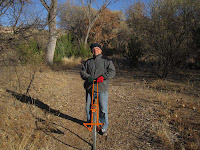 Speaking of the Old Field, we borrowed Bill C.'s measuring wheel and spent Sunday morning out standing in our field being Type A about determining the distance of every little segment of the walking path.

Yes, we did go bowling, as promised.  We bowled ten games and that's about when our left arm felt like it was going to fall off.  It was aerobic bowling--we didn't sit down once--and we worked up one heck of a sweat. We averaged 126 per game with a high game of 157. We bowled 25 spares and 19 strikes in those ten games, which cost a whopping 80 cents each.  Luckily, one of the strikes came when the red pin was in the first position so we won a certificate good for two hours of free bowling (shoes included) anytime we want to use it.  The casino bowling alley was packed yesterday.  It was even more fun that I hoped it would be.

Susun is off early today--she arose at 6 am which doesn't happen very often.  She's first heading out for a hike with Phyllis & Friends, then having lunch with Gert and Beth and finally heading to Betty's Place to spend the night while the two of them hoot and hollar while they watch Dancing With The Stars.  She will return sometime tomorrow. 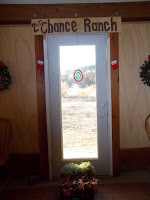 Meanwhile Little Yonni will greet a handyman who might tackle getting our south door shimmed plumb and square.  The door has been sitting here for a couple of years.  We might as well start using it one of these years.

Not much else is on tap for the day.  We've been making great strides getting rid of stuff that we have saved in plastic tubs for the past umpteen years. Yesterday, we trashed all the stuff we'd been saving since 2001 following our summer in the Dixie National Forest at Cowpuncher Guard Station near Escalante, Utah.  Why do we keep such stuff for so long?  Makes no sense but it's a fact of life.  Hopefully, by the end of the year, we will have trashed a lot more such stuff.

Well, that's really about all there is to report.  Have a great day & Many Cheers, jp