Moonshine on The Salmon River 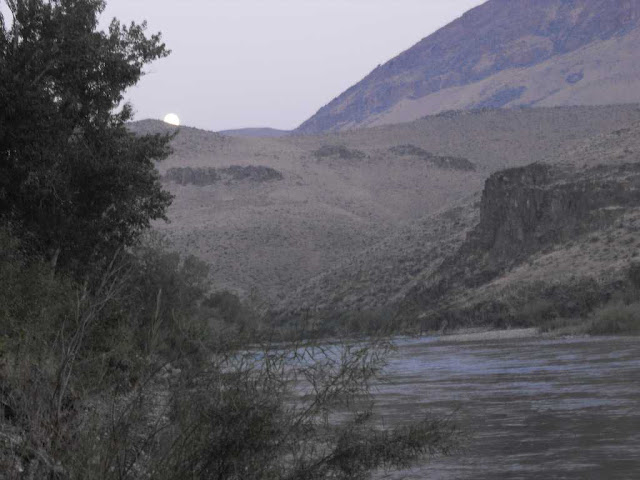 By the dawn's early light the moon set over yonder rugged ridge.  A bald eagle flew low over my camp and two perfect "V's" of Canadian geese honked their way down river.  Fish rose to feed on The Salmon River's surface.  A gentle breeze tickled the cottonwood leaves as Bambi browsed contentedly on the far shore.  The August Blue Moon has been spectacular here at Duane's Place.  It will be next year before we get another chance to savor the splendor of that bright white orb floating so gracefully overhead here.  Ah, Cottonwood, let me count the ways... 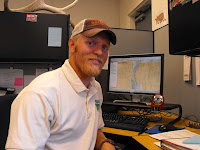 Yesterday we had 16 whistle stops and chores on our "to do" list.  We managed to actually cross off 12 of them--that's a .750 batting average for you baseball aficionados.  Perhaps our most productive visit was with Ben Roundtree, Jeff Christenson's replacement as the Challis BLM Recreation Planner.  Ben was just started his third day on the job when we showed up at his door step.  We had a productive one hour meeting and feel that our BLM river guide project is finally going to get somewhere--at least within a year or two.  Anyway, our part of it will be mostly over and done when we return to Ben's office August 23rd for our final meeting of this 2012 Idaho Season.  The other 11 stops in Challis were fun, too, but we really got lucky meeting with Ben.  We didn't even know he had been hired and hadn't even called ahead for an appointment.

The people of Challis and Salmon Country have grown up with forest fires every year.  Unless the fire is right at their doorstep, a forest conflagration is a real yawner to them.  Dense smoke?  Yawn.  Near zero visibility?  Yawn.  Burning eyes?  Yawn.  The smoke from the Halstead Fire overwhelmed Challis yesterday and at times dropped visibility so low you couldn't see any of the mountains or hills around the city.  The Halstead started by lightning 18 miles from Stanley as I was sleeping at Sunny Gulch.  The initial attack by 14 smokejumpers could stem the firey tide so Smokey called in the heavy artillery when the fire blew up on Monday.  Now it's a major motion picture with a national level incident management team and all the usual bells and whistles a big fire brings.  It's grown to well over 5,000 acres and the commander said yesterday, "We won't put this fire out soon or easily."  That's code talk for "This fire will burn until it snows."  Meanwhile, Smokey will probably wind up spending a million or more messing with it too make sure it doesn't sneak over and snuff up "high value assets" near Stanley.

If you want to enjoy the pristine beauty of Salmon Country, be sure to visit before fire season starts.  Once the smoke starts rollin' round these hills and valleys, cool, crisp views will have to wait until fall's first snows arrive.

It is with a tinge of sentimentality that we drive away from Site 7 this morning.  We have been mightily tempted to "stay & play" here for the next couple of days.  Alas, we must go.  Responsibility beckons.  We shall return again Oh, Dear Cottonwood!  We know you will be waiting.

Now the moon's going down along the winding hill.Salmon River moon, I am waiting still.