Looks like the last blog post here was August 27th and now the month is over in less than five hours.  After that brief and truly delightful lull, I've been sitting at the computer for hours and hours each day, pretty much addicted to the Halstead Fire.

As far as promoting the Salmon Thang website, we couldn't ask for a better opportunity so we might as well "make hay while the sun shines" as my parents loved to say.  The whole thing is like a restless volcano.  Each of the past two days have seen 700 page views.  The Halstead article will hit 5000 page views by Sunday, it's already waaay past 4,000.  The website itself will hit 15,000 page views by Sunday.  Of that there is no doubt.

I am so up to my eyeballs in covering this fire, I am not yet detached enough to tell you what it is like.  All I can think of is the rodeo analogy--coming out of the chute and holding on for dear life.  It's pretty incredible. I regularly receive emails and Facebook messages that bring me to tears.

Today, I swapped perhaps a dozen back and forth Facebook PM's with a Mom whose husband and 16-year-old daughter ignored evacuation orders so they could stand together manning and womaning the water pumps at their house as the fire raged nearby.  I have people send me messages like this one that tug at the roots of my heart strings.


"I truly love those mountains and the land.  I will never forget the first time I saw them - I seriously had to pull over on the side of the road because the tears were rolling down - I can't tell you what the magic is, but it is there - when I can't be there, I am there in spirit - when I get troubled, I look at my pics and it gives me a sense of peace - crazy I know but the truth. I will keep the people and land of the Sawtooths in my prayers!"

I see very respected people posting notes that my coverage of the Halstead Fire is without peer.  It just goes on and on and I am a twig once again caught up on a surfing wave.

Last night, I couldn't help myself and I posted my first personal opinion in the Halstead article.  I sent it to Wayne Ranney and he had kind words for it.  He said, "I always love and appreciate when you write this way. It makes not only for good reading but tugs at the soul strings of life itself." Thanks, Wayne!

And so here is what I had to say.  It's been getting great reviews since last night and it sure makes Susun and me proud to know we could provide a little morale boost for those people in Stanley & Sawtooth Country. 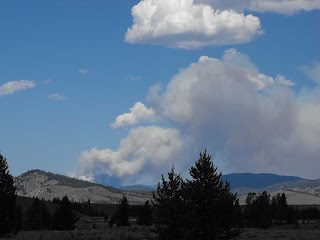 "It was a month ago this morning when the Halstead Fire threw up its first truly large plume near the ignition point 18 miles from Stanley.  We happened to be camped at Sunny Gulch the night before and took the photo below from the Stanley Ranger Station parking lot looking north that afternoon.

Little did we know 30 days later we'd be sitting here glued to the computer making updates on the fire several times each day.

Little did we know that our August 9th article on the
Halstead would have thousands upon thousands of page views.

Little did we know we'd meet new Friends through Facebook and elsewhere who would become observers, photographers, writers and  commentators about the fire.

The past 30 days since we took the photo at left have been a roller coaster of riveting, saddening, frustrating, and ever captivating experiences.   When the first news of the fire hit the media in early August, one fire guy was quoted as saying "This fire won't be put out easily and it won't be put out early."  Oh, how prophetic!

As the weeks have turned into a month since the Halstead sprung to life at the head of an obscure creek not far from Cape Horn, our collective consciousness has begun to change in ways none of us perhaps even realize yet.  Perhaps we wonder to ourselves, "How will this affect the future of Salmon  and Sawtooth Country?"  Perhaps we begin to ask ourselves each day, "Will this fire ever end?"  Of course it will. All forest fires end some day.  This one will end, too.  Nobody's yet invented a fire that can burn through the winter's snows--unless it is in a cozy woodstove, of course.

We'd like to take this opportunity to put forward some positive energy about the future.  We believe Salmon & Sawtooth Country will survive this fire just as they have survived fires over many millennia--with great class and style.

We believe the people of Salmon & Sawtooth Country will rise to the challenge and beam ever brighter optimism and hospitality for all those thousands who seek their annual solace, recreation and joyous fun where the majestic mountains and righteous rivers come together to create such a special place.

Yes, it's difficult to look past the daily drumbeat of dire fire news.  It's so confusing to sort through the cacaphony of conflicting reports. It's hard to see the forest for the flaming trees.  It's tough to take as a vast chunk of Idaho's playground burns to the ground in front of our eyes.

Let's be clear here--No matter what the outcome of this wild fire is, the Fans and Friends of Salmon & Sawtooth Country will overcome and prevail.

We believe the people of Salmon & Sawtooth Country will rise from the ashes of this event with renewed vigor and dedication to this awesome place.  Yes, it's been nicked but it's not gone.  It will still be just as wonderful and beautiful as it's ever been.

As these dark days of fire fog our spirits and hurt our hearts, we must not forget there is still and forever a special magic alive in Salmon & Sawtooth Country.  It is a magic that lives far beyond the fingers of any fire.  The magic and splendor of Salmon & Sawtooth Country cannot be dimmed by a mere smoke plume or a swath of blackened beetle-killed trees.

Let us remember these realities during today's trying times.  Let us remember that "these things, too, shall pass."  As Earth, Wind and Fire meet together to fan the flames of their eternal relationship, let us reflect on why we love this place and know that it will be just as special and just as dear as ever with the dawn of each and every new day.