Lots has changed since The Good Old Days and now.  One of the changes that's very hard for me to understand is the annual "Back To School" ritual.  It always amazes me that retailers start featuring back-to-school supplies immediately after the July 4th holiday.

Yesterday, we were reading the Camp Verde Bugle online newspaper and, lo, school actually starts at the Beaver Creek School tomorrow!  That's August 7th--technically the first week in August.  Something fundamentally wrong with that picture.  Us Old Timers fondly remember when all schools started after Labor Day.  That's the way it was in The Good Old Days.  Summer lingered long and lazy and Labor Day was the shining beacon on the calendar's horizon.  Nobody worried about buying school supplies until well into August.  How could any right minded person send kids back to school in the first week of August?  If it's not unconstitutional, it surely ought to be.

Beaver Creek School, by the way, is our local taxing school district down practically next door to our Arizona place at Second Chance Ranch.  It's been a hum-dinger monsoon season in Arizona this year.  Gary W. says we have a new crop of tumbleweeds that sprouted in the ample rainfall.  Send some kind thoughts Gary and Robin's way today.  Their beloved 7.5-year-old, perfectly healthy dog Chakra died suddenly yesterday of a heart attack.  Gary and Robin's spirits are very low right now.  Our hearts go out to them.

Well, it's the first Monday of the month and we all know what that means, right?  Yep, it's time once again for the monthly Parks & Recreation Commission meeting.  July's meeting was scratched due to lack of a quorum.  We hope to be able to attend in person the September, October AND November meetings before departing for our Arizona Season.  The new P&R Director hopes also to connect us via speak phone during the winter months.  DF & LBR Terry M. will be presenting a report on QR Codes.  He and I did a mini-experiment way back two months ago in early June.  If you have a smart phone you know all about QR codes.  If you have a dumb phone, they don't really matter.

We received some surprising news yesterday.  Tom Bonomo and his wife, Pat, are coming to visit September 8th.  That's practically earth-shaking news.  We are very excited about it.  They couldn't have picked a better time.  Susun flies out to San Diego the morning of the 10th.  We will have just returned fro our annual Grand Teton camping trip on September 7th.  Talk about perfect timing.

Lin Mickelsen will be passing through for one night this Wednesday and then returning next week for a couple of days.  Gary W. will be here the 15th and then again on the 25th.  That's about all the company we know of, at least at this time.

Speaking of Back To School, one of the reasons we spent so much time on that Salmon Thang yesterday is the learning curve on the project's blog.  It's a blog just like this one with a domain name pinned to the top of it so that it masquerades as a website.  Well, it turns out there are all sorts of new-fangled things one can do with a blog, stuff I had no clue existed.  No, I am not changing a thing there on this blog.  However, on that blog, I really need to make an effort to use the latest and greatest bells and whistles.  Also, I decided I needed to superimpose one photo over another photo for the new banner on the Salmon Thang front page banner.  For my entire online life, I have studiously avoided Adobe Photoshop.  To me, that gargantuan, world famous software is a giant Black Hole.  If you get sucked into Photoshop, people might never see you again.  Well, whatever.  The problem is that there aren't many ways to manipulate digital files unless you use Photoshop of one of its competitors.  Luckily, I found a freeware program called Gimp.  How perfect:  A Gimp for a Gruff Grump! Anyway, Gimp's learning curve was substantially steep but nothing compared to the Mount Everest of Photoshop.  Gimp helped me make the new banner.  I will be changing out the banner's photo at least once a month, probably more like every two weeks.  The one common element of each new banner will be the small inset photo of Susun facing the approach to Cronks Canyon.  That particular little photo adorns all of our online assets for the Salmon Thang.

Speaking of that Salmon Thang, it logged its 5500th page view yesterday evening.  Interestingly, we have been having some success with SEO--that's internet lingo for "Search Engine Optimization."  What SEO really means is that you hope your website isn't buried so deep in the results that no one will ever find it.  If you typed in "Salmon River Idaho" in Google search a few weeks ago, there was NO chance you'd find the website.  Well, we have been tweaking our SEO options and two weeks ago we moved into the Top 100.  Considering how many things come up with the keywords "salmon" and "river" and "idaho" we thought cracking the Top 100 was a big deal.  Lo and behold, while we were away last week doing absolutely nothing with SEO, we have managed to move up to #35 in the mix.  That means we are on Page Four of a Google search using those three keywords.  That's HUGE, if we do say so ourselves.  It would be nice to move higher than #35 but it sure it going to be tough competition at this level.  We're up against some serious heavy hitters at this level.  Naturally, we will keep you posted.

We're going to be particularly busy for the next two weeks.  We leave at 5 am August 19th to head up to Heather's Place at The Dream Ranch alongside the East Fork.  We'll remain in Salmon Country until the afternoon of August 23rd when we return back here.  It won't be any where near the type of trips we experienced June 16-23 and July 28-August 4.  Nope, very low key stuff.  We will, however, be in Stanley August 22 for the anniversary of Tricky Dick signing the SNRA into existence back in 1972.  Then we have to meet with the BLM in Challis the morning of August 23rd.  Most of the trip will be spent hanging out at Heather's Place, probably sleeping in a real bed instead of a tent.  We might even be able to get up and soak in the Bowery Hot Springs.

Here's some Karma Loop irony for you: It was five years ago on August 17th when we left Bowery to coe to Idaho Falls to take the RSVP job.  Now, five years later we will be going back up--at least for a few days. Older people always told me time would pass a lot faster as I aged.  Boy, were they sure right!  These past five years flew by in a wink.  We've now been retired again as long as we had the job in the first place--2.5 years.

Speaking of Bowery, Duane told us that the couple who signed on to volunteer there this year apparently quit early.  He said they passed through Cottonwood Campground a few weeks back heading north to Montana.  It's little wonder they couldn't hack it.  The big wonder is how Susun and I managed to survive out there for four summers.  It's just so complete and totally in the middle of absolute nowhere.  Looking back, we both shake our heads in amazement that we actually spent four summers there.  There's no way on earth we could even possibly consider such a thing at this point in our lives.  The mere thought is so alien to our beings.  Well, it got us to Idaho Falls--that's what counts--no doubt about it.  We sure love this place.

This is the time of year we look down at Ol' Airy Zonie and say, "Hum, it's going to be over 100 all week in Rimrock," or "Gee, it's 117 in Phoenix right now."  This time period in the summer is equivalent to the depth of winter in Idaho Falls.  That's when we are in Ol' Airy Zonie looking up at Idaho saying such things as. "Hum, it's going to be below zero all week in Idaho Falls," or "Gee, Island Park got down to minus 35!"  We are very fortunate and very happy to be able to be here when it's hot there and there when it's cold here.

Anyway, we started to talk about being busy the next couple of weeks and got sidetracked on a meandering tangent.  We're getting back into our pistol shooting hobby these two weeks.  Last year we attended 13 straight pistol matches.  This year, we're going to be lucky to participate in six matches...maybe.  Tow of those will be during these next two weeks.  Also, we have to finish our BLM project prior to August 23rd. No wiggle room there at all.  Plus, we need to get back into swimming and doing the stadium steps and hitting the treadmill.  We can sure feel the lack of exercise the last couple of weeks.

Now, if you think we have been wandering aimlessly through a tangled thicket of words here, please do remember this blog's subtitle: "Ruminations & Reminisces about Mundane Meanderings."  A post like this one is the epitome of the subtitle.  Once in awhile, it's good to go back to our roots.

And speaking of roots, you should see the Hilda Garden.  It's outrageously beautiful right now.  That garden always peaks in August--there's nothing new about that factoid.  But Dina's attention to detail and the ba-zillions of flowers planted so precisely there this year have combined to produce a brilliant display of color, diversity and just flat out mass beauty.

The city crew have been out doing their annual "judging" of the various flower gardens around town.  Susun and Dina aren't the only volunteers planting and maintaining flowers.  There's enough volunteers doing it to equate to a half-time paid staff member's expenses.  The city will throw a party August 15th for all those volunteers and announce who wins the annual contest for Best Garden.  I would expect Hilda to at least place in the Top 5, if not higher.  It's going to be real interesting to see.  This is a year when I will definitely want to attend this fun summer event.  Below are some photos of the Hilda Garden area taken yesterday during our Sunday Morning Bike Ride.  Well, that's all, folks.  Have a Great Day & Many Cheers, jp

PS--For those wondering where the "Go To Church" lyrics went--we moved them over to the Mesquites Rule blog. 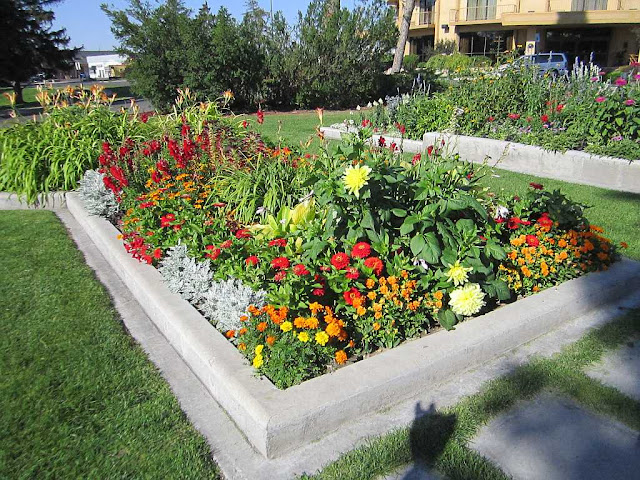 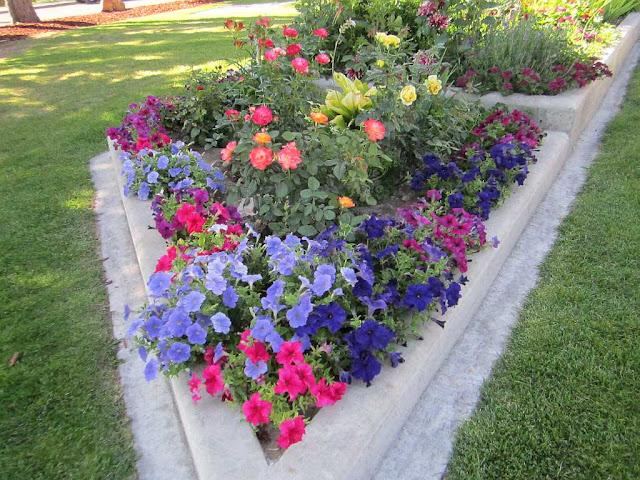 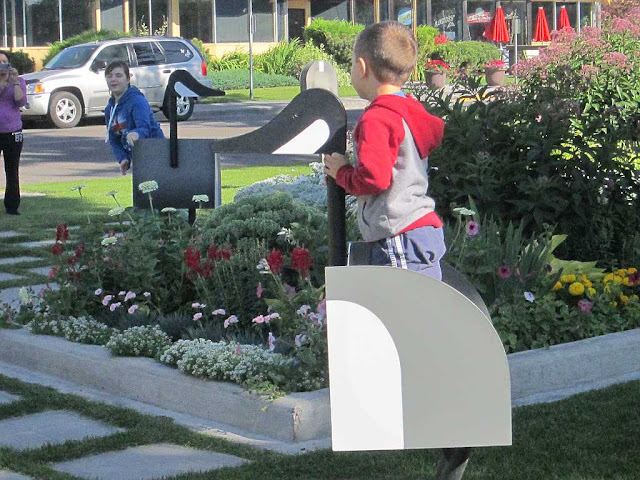 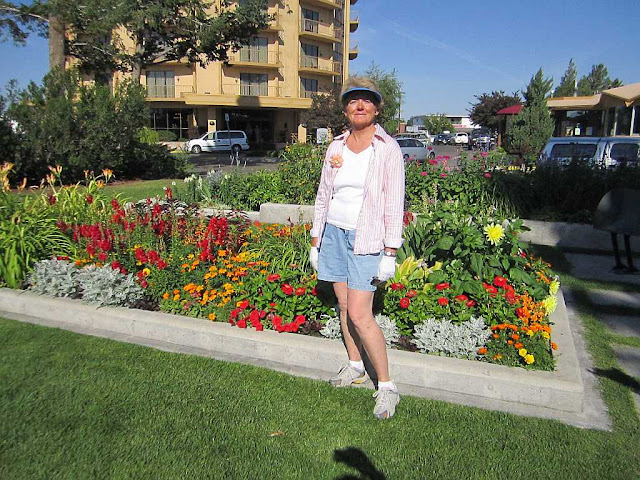 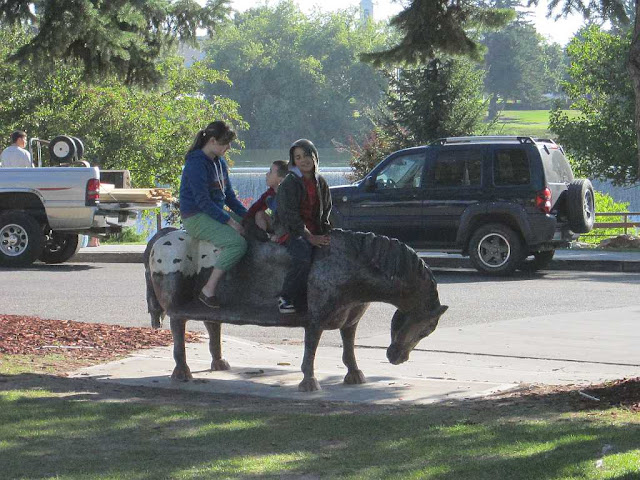 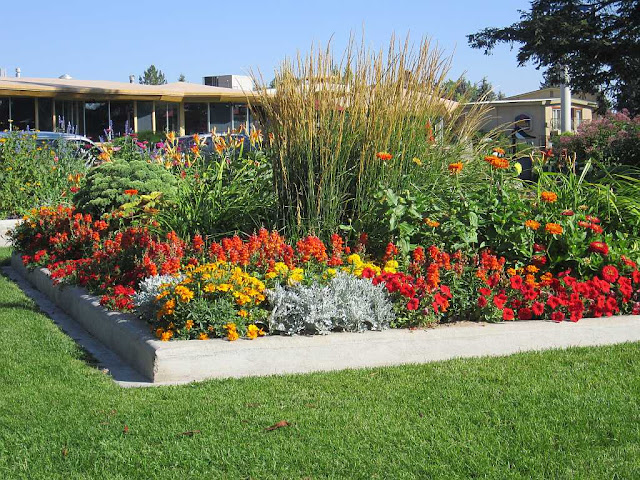