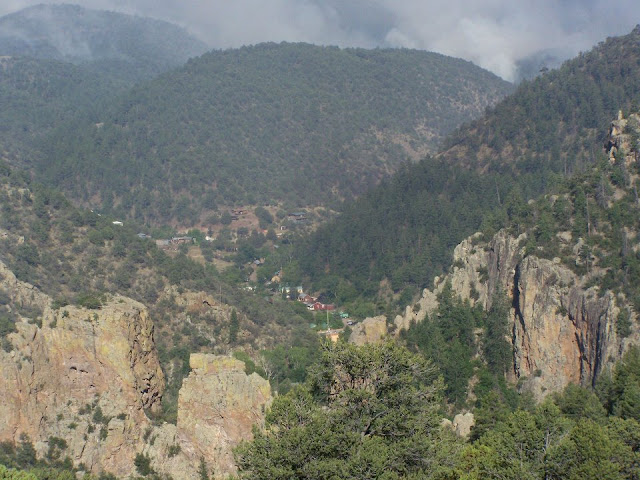 Look closely and you can see Mogollon's buildings down in the bottom of the canyon.
The distance between the fire and teh ghost town was approaching less than a mile at one time. 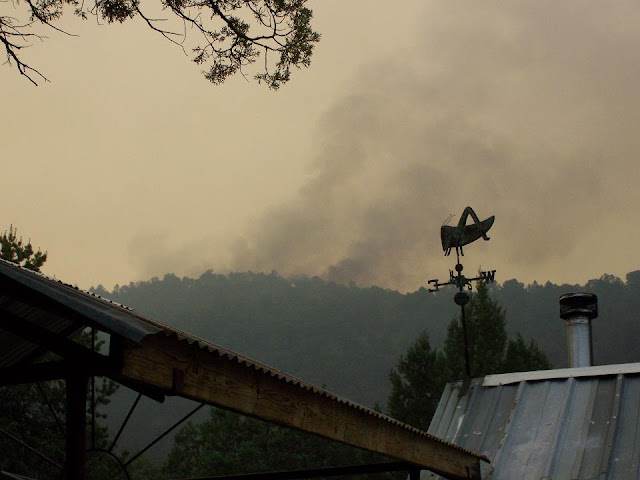 The crews set the backburn on a ridge very close to Denise's Place.
Then the wind shifted and there was a flare up heading downhill.

It was touch and go there for awhile but Mogollon, New Mexico, survived to live its ghostly life another day.  The tiny town's survival hung in the balance of fickle winds.  Apparently, Thor, mythical God of Fire, decided Mogollon should be spared and Thor huffed and puffed and blew the wind away.  If not for the lucky break on the winds, it could have been a completely different outcome.

As for Denise's Place, the fire crews set some back burns nearby that really helped staunch the possible slop over of the fire into her domain.  There was one dicey moment when a portion of the back burn went awry and flared up and looked like it was going to roar downhill and wreck havoc at Super Salve Central.  Denise & Crew even fired up their hoses and sprinklers and started wetting down their walls.  The Forest Service threw everything they had at the flareup and snuffed it in its tracks.  It was pretty dramatic, actually.

And so The Legend of Super Salve grows.  They can now rightfully say they survived the largest forest fire in New Mexico's recorded history (which goes back a-ways, as you may know). It's going to be a long time before the main part of the fire is controlled.  Soe say control won't happen until the monsoon come  However, all the hot action is now far from Mogollon and Denise's Place.  In fact, it's so safe that the Catron County Sheriff is removing the mandatory evacuation for Mogollon effective Monday June 4th.  Even the public may go back to their favorite watering hole(s) there on June 6th.  The lifting of the evacuation was announced  mid-day Saturday so you know things there are under control.

Many Cheers!  jp
Posted by John Parsons at 6:46 PM