Goofin' Off With Go Pro

We took the Big Leap and bought a Go Pro Hero 2 helmet cam!  YIKES!  We've spent the latter part of Sunday learning how to use it.  No new piece of technology is easy to learn--no matter what they say.  Everything has a Learning Curve.  We've really studied this gig and it rox.  It took awhile to pony up the entry price to join the Go Pro People.  Now that we actually own one, we wonder what took us so long.  The camera is so ridiculously small that you feel like a chump for ponying up $300 for it.  But, Wow, whoever designed this little thing really knew what they were doing.  So far, our biggest complaint is about the audio quality.  In a word it: SUX!  However the video quality is superb.  It comes out as an MP4 with roughly a meg a second. That's not too bad and doable to upload to YouTube.  We're beginning to see the utility of having two computers on our WIFI router--one doing yeoman duty as an uploader while we use the other for mundane internet chores.  We've done two test vids--one with the waterproof back and one with the non-waterproof back.  You can click here to see the YouTube of what we're calling "Take Two."

It's the second video we did with this puppy.

We've messed with ba-zillions of video cameras beginning back in 1966 when a video camera weighed as much as a VW and had cables the size of South American pythons.  We've eventually tried almost all of their goofy and expensive permutations.  We resisted this particular genre because of the high price point and the over hype it was getting online.

If you want to see a video of what the Go Pro cams can do when in the hands of expert kayakers and equally expert video editors, you really ought to check out Bomb Flow Magazine's video entitled, "Go To Church," a fitting title for this Sunny Sabbath.

No, we are NOT going to be dropping off RAD waterfalls.  Ain't gonna happen.

Here's how the helmet cam strap fits on our head helmetless.  Both variations are acceptable.  We plan on buying other various mounting devices for this new toy.  Just for fun we went out to Target today and bought a 16 gig Class 10 SD card.  In military parlance, we're "locked and loaded" for running the river when Joshua comes up June 15.  Ain't gonna be nuttin' we don't catch on video with a rig like this one! 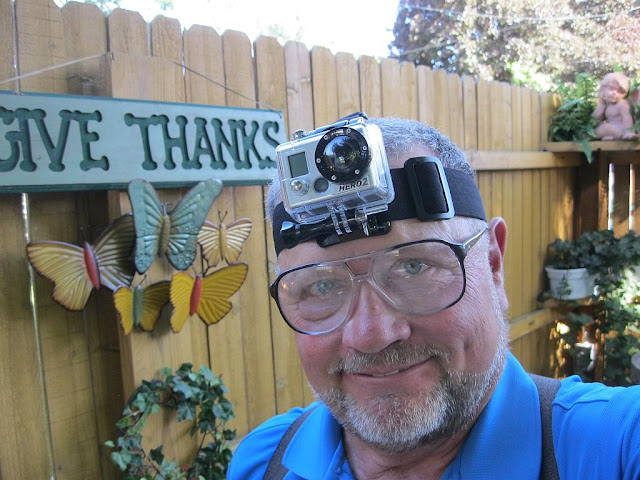 Well John you realy do have your self there a real dream date!
Love and kiss's, Deano & Lora