Our Salmon trip was very enjoyable and productive.  Now we must attempt to summarize it before too much more water flows under the bridge.  We pack a lot of stuff into a short time period and it's tough and time consuming to have to sit and try to remember it all.

DF & LBR Terry M. actually wrote a book last year wherein he actually recalled all of the details of a couple of dozen world traveler trips, some of which were many years ago.  How did he do that?  We can barely recall what happened to us last month, let alone last year.  Five years ago?  Forget it!  Alas, we digress.

Well, as long as we are digressing, here's one more for you--PHOTOS!  We take far too many pictures.  It's frustrating.  This trip, I decided to simply post ALL of our 170 photos in one place and let those with too much time on their hands take a look at them.  I've tried to go through and pick out some to post on this blog.  My short list is now a dozen photos and that's still way to many pictures for a blog post.  Yikes!  Ok, we are done digressing.

Here are the Top Ten comments about the trip:

First, our traveling rig worked great.  Even though we bought the poptop and the Samurai on the same day--December 26th, 2010--we had not yet taken it on a road trip such as this one.  All of its road trips were coming and going to and from Arizona to Idaho.  Our 9-day return trip last month was our first lengthy experience in the pop top.  Armed with the lessons we learned from that trip home, we made a lot of improvements and modifications to the rig.  They all really enhanced the Salmon experience.  We continue to make minor tweaks and so forth but basically we have a real decent, workable camping rig that suits us well.  This Salmon trip was "proof of the pudding," so to speak.

Second, the Samurai was put through a real workout on our trip along the Morgan-Panther Road.  We have a lot of work to do to improve how the Samurai behaves but basically all of its vital parts passed a real test with flying colors.

Third, The BLM Cottonwood Campground at Ellis is truly our favorite campground.  We waffle between calling Jenny Lake our favorite.  We suppose whichever one we are camped in will be our favorite at that time.  It's so wonderful being camped beside a giant, free-flowing river.  Fish were jumping the whole time.  Geese, osprey, herons, ducks, eagles and hawks crowded the skies in such profusion we thought they needed an air traffic controller to sort them all out.

Fourth, we wanted to drive Morgan-Panther for 8 years.  What an amazing road!  We've never seen that much whitewater next to a road anywhere--miles and miles and miles of whitewater.  A lot of the whitewater was Class VI stuff and very exciting to see.  We drove the 64 miles north to the Main Salmon River downstream from Shoup.  Panther Creek was so awesome and inspiring, we turned around and drove it back upstream to the Napias Creek confluence.  Shortly thereafter, we turned left and took the main mining road 35 miles or so to Salmon.  We put close to 170 miles on the Samurai that day.  We were away from camp 8.5 hours altogether.  It was tiring and very dusty but very invigorating.  We'd do it again in a heartbeat.

Sixth, we have better cell reception now in Challis than we do right here in Idaho Falls!  And get this--Duane  has set up free WIFI at the campground.  Who knew?

Seventh, things went swimmingly well with our Salmon River Guide Project.  Our Supervisor basically dumped the project in our lap and told us we could pretty much do whatever we wanted.  His replacement probably won't come along until perhaps October or even later.  Soooo....it's ours to mess with this summer.  We signed a volunteer agreement to get free camping and 1,000 miles of a small mileage reimbursement and we're good to go.  We quickly decided to enlist a lot of people we know up there to help us with the project such as the Sheriff, the Hecla Mining geologist, the Forest Service archaeologist and the newspaper editor, as well as assorted locals who crossed our path a the HUB or Lamb's Grocery store.

Eighth, The HUB continues to be our favorite thrift store of All Time.  We told the Alpha Woman there that it feels like home and, as we all know, there's no place like home.  It would cost $50 at Deseret Industries to buy what you can get for $10 at the HUB.

Ninth, The drive to and from Challis is spectacular this time of year. The Lost River Range contains 7 of Idaho's highest peaks and they are all snow-covered and just absolutely beautiful.  It's a fairyland up there right now.

Tenth, We've decided we're going to put a lot of time and energy into the Salmon River Guide Project this summer.  As long as Jeff pretty much gave us a carte blanche to do whatever we please, we might as well seize the opportunity and run with it.  We're going to meet a lot of new people; have some really fun times; and produce a legacy product everyone can be proud of.

Well, there you have it.  Now we will try to put up some photos. (Click here for all 170 pictures.) 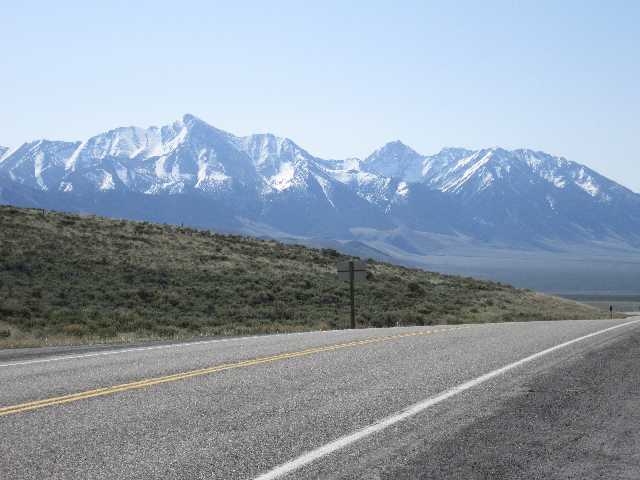 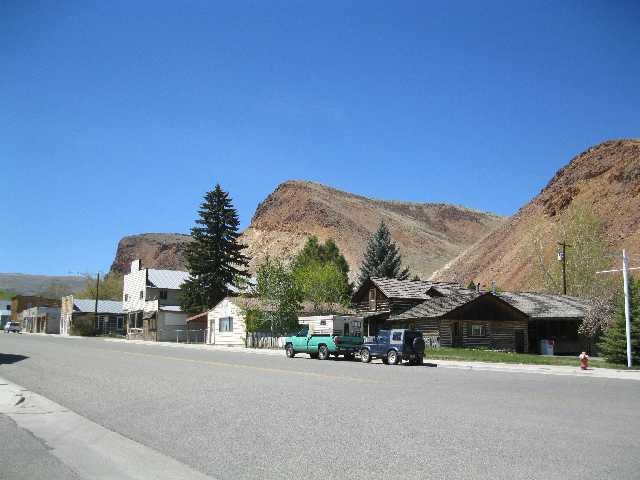 Our travel rig looks real good on Main Street in Challis.  We've said for 8 years that Challis should have been the location for the TV series "Northern Exposure." 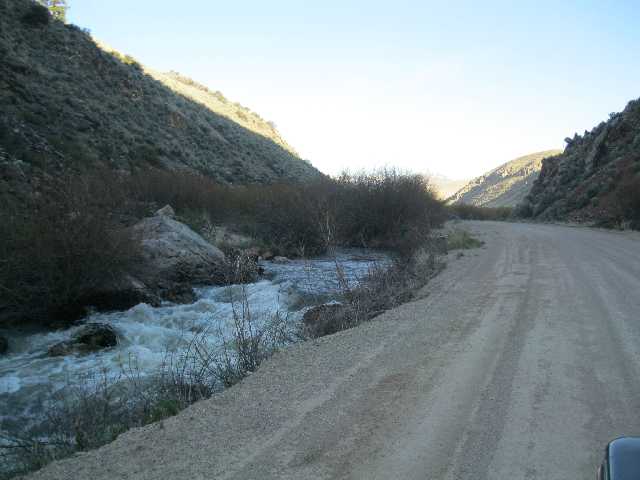 Morgan Creek hugs the road in the early morning light.  It's lower few miles are real frothy.  The upper reaches are marshy. 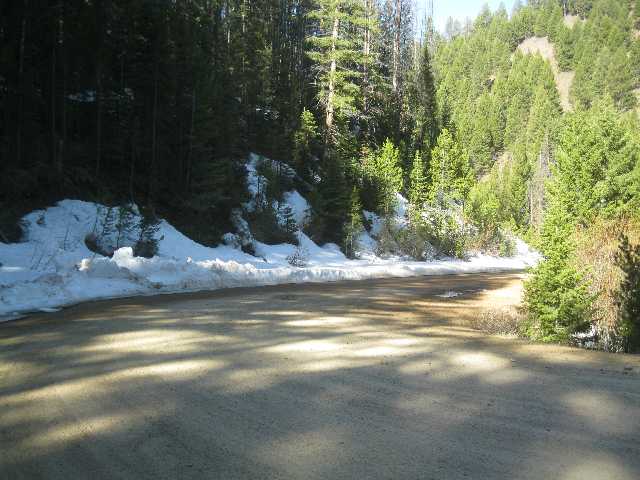 The road just opened two days before we drove it.  There's some high elevation snow that blocks traffic.  They generally don't clear the road until early May. 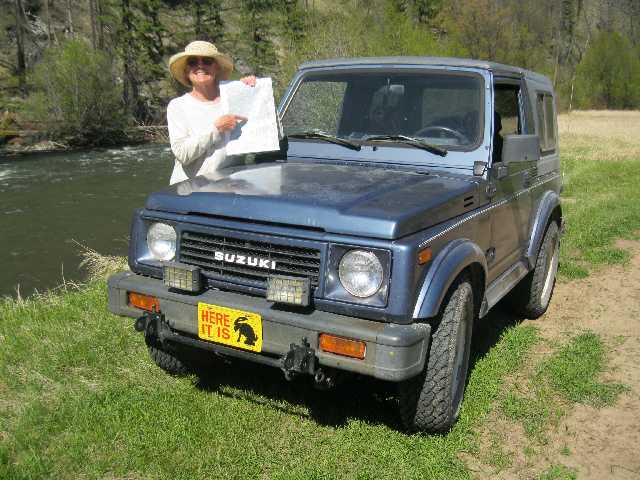 Yep, she's in her element again.  You've heard of tree huggers.  Well, here's a Map Hugger.  This is a nice spot near the confluence of Panther and Napias Creeks. 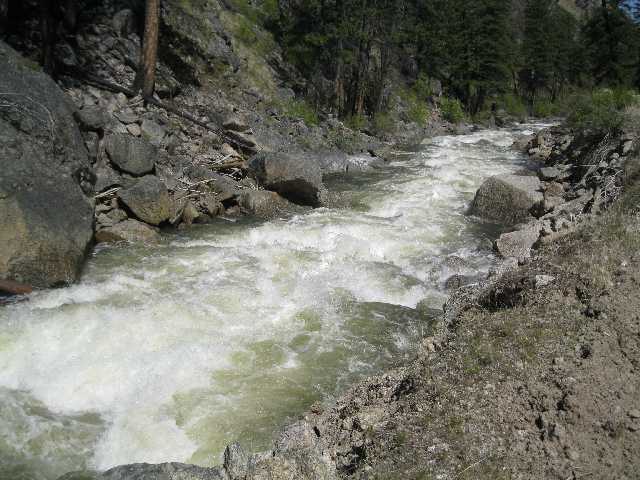 Panther was one foot wide up at Morgan Summit.  It quickly gains volume and then strength and is a dazzling sight to behold!  It's basically right next to the road for about 34 miles. 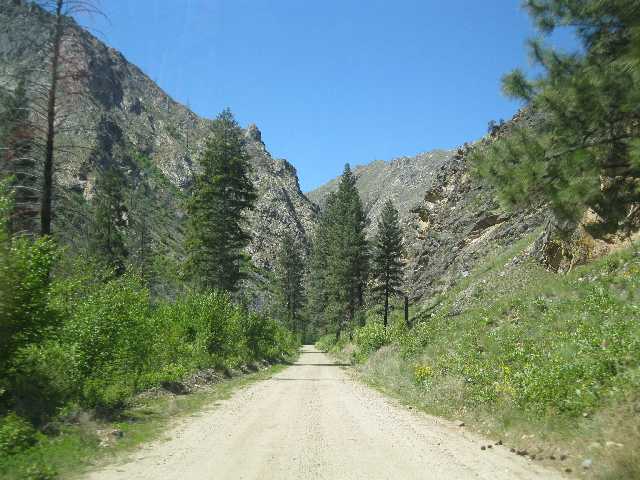 When the road is playing tag with the creek, it's going to scenery like this.  You're in a canyon and it's great. 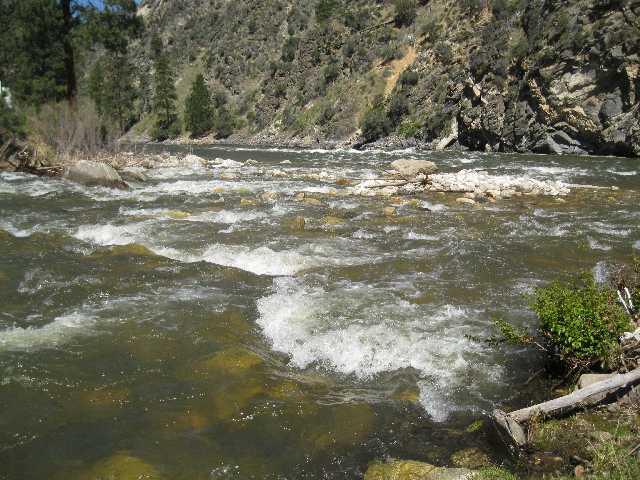 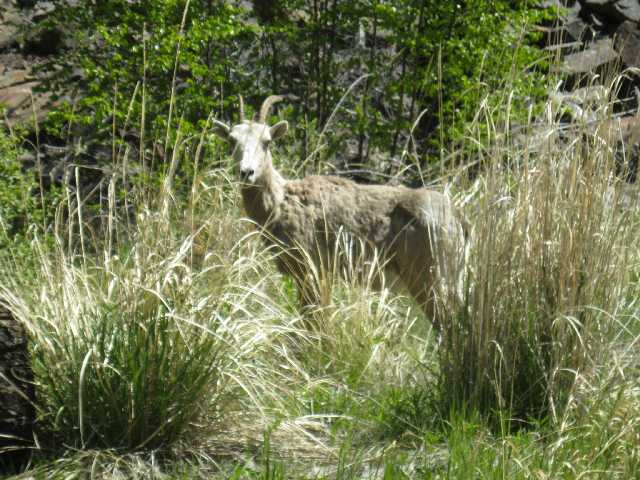 We saw only this lonely sheep but quite a few deer. 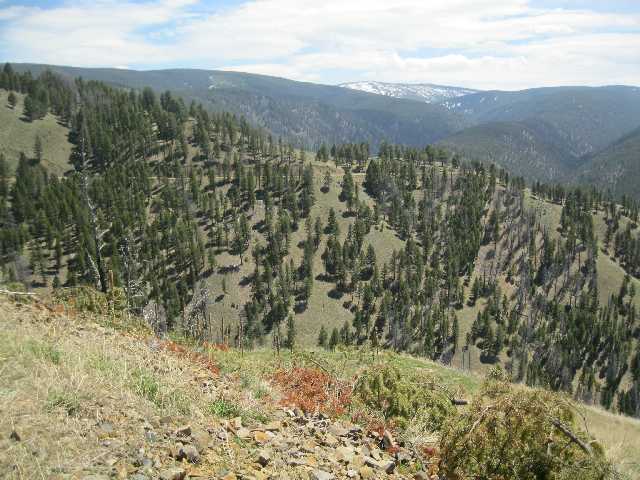 The Blackbird/Cobalt Mine Road climbs out of a really steep and deep canyon.  Very rugged country. 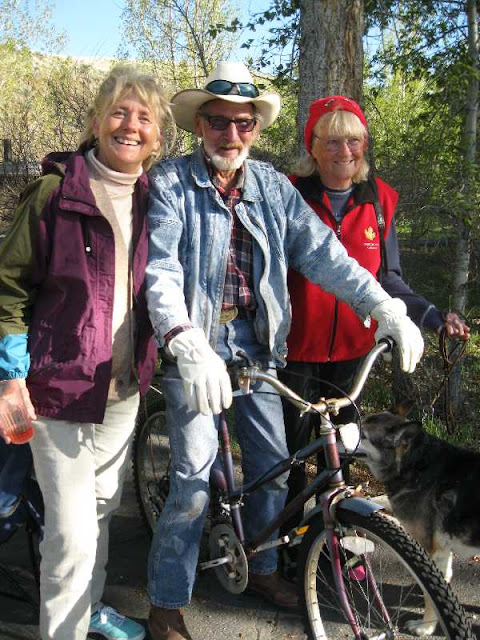 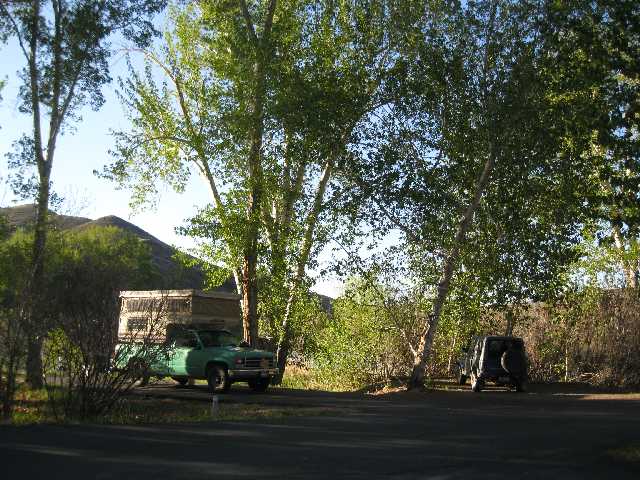 Ah, Home Sweet Home.  The water's edge is 30 feet behind the camper.