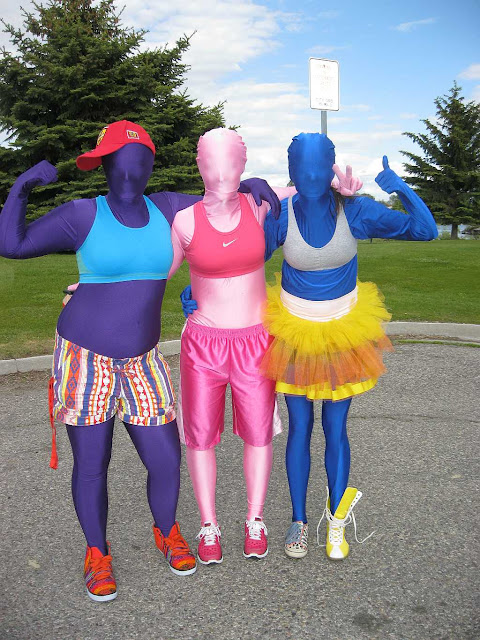 Every place has its own local color.We went out for an aimless Holiday drive yesterday. We didn't really have any planned itinerary.  We found a new dead end road that winds up into the foothills at the east end of 49th South.  We admired the distant snow-covered mountain ranges on teh far west side of The Snake River Plain.  Then we went to the city's skate park and watch young guys catch air and defy gravity.  The stuff they do not only defies gravity, it defies our imaginations.  After tiring of watching airborn young males, we inspected the Community Garden area and scoped out where Bill's Bike Shop is going to relocate.  Then we headed down the River Parkway to see how big the baby geese have become.  And then we drove over to John's Hole and that's where the bright rays beamed from some serious Local Color.  We have no idea who these three young women were.  They told Susun they were from Idaho Falls High School.  I guess that's a place to be "from."  They sure were turning heads and making everyone smile.  They skipped through the park like Holiday Fairies, chasing a duck or a goose now and then and Making Merry as young women are wont to do.  Their bright colors and cheerful abandonment easily outshone the sun itself yesterday.

Many Cheers, jp
Posted by John Parsons at 10:00 AM