As most of you know, we spent the bulk of our life messing around with the Verde River.  Our love affair with that river began in 1981 and has never really faded.  Back in the 1980's, we struggled mightily to understand the mechanics and hydrology of the river's 6,600 square mile watershed.  For more years than we can remember we served as volunteer "water watchers" for Salt River Project and further honed our skills in assessing and predicting stream flows.  Learning such arcane skills can be likened to riding a bicycle.  Once you have acquired such skills, you really never lose them.  As with a bicycle, you can leap into the fray and use those skills anytime here in the Verde River basin.

And so it was last Monday morning that we began predicting a big surge in stream flow no later than Saturday morning down at Beasley Flats.  Of course on Monday morning, all the river's tributaries are basically bone dry or trickling almost imperceptibly.  Many people patted me on the head and told me to go home, take two aspirins, lie down and let the wide-eyed stream flow fever run its course.  Well, we knew better than that--it comes with decades of experience.

Meanwhile, time pass and no flow appeared. As the clock ticked down toward Saturday we began wondering if perhaps the fog of age had perhaps dimmed our predictive skills.  Maybe people were right.  Maybe we were too wide-eyed with a raging case of stream flow fever.  Yesterday's daylight hours came and went still with no response whatsoever from the upper watershed.  At that point, we began to call ourselves into question, wondering how it could be that no water had yet flowed downhill from a very impressive snowpack deposited last Sunday and Monday.

We were standing around the camp fire visiting with Tim and Maria Elena last night.  It was a wonderful, still, warm spring evening.  And then it hit--BAM, as Emeril would say.  I was wearing my new hearing aids and they picked up the wonderful, delightful, hypnotic sounds of rushing, leaping waters charging downstream in the Wet Beaver Creek channel.  YIPPEE!!!!  WATER WORKS!

This morning, the proof of the pudding lies in the three graphs below.  They are about as vertical as vertical can get.  This is what a mini "wall of water" looks like as it rolls off The Mogollon Rim hurrying on toward metropolitan destiny downstream.  Back in the early 1980's, we developed a theory that events such as this come off the Rim in the form of an actual wave of water.  The charts verify this type of classic event took place yesterday.  It was outrageously warm up in the high country and in the 80's down here in the mid-level deserts.  In affect, the hot weather flash melted last week's snow fall and, POOF, it all came down in a hurry.

It sure was gratifying to wake up this morning and check out the hydrographs you see here.  They made us smile very big and brought a real glow to our spirit.  It's been awhile since we went out this far on a limb and stated emphatically that there would be raftable whitewater Saturday.  Calling such a specific place and date in time is a recipe for a major loss of credibility.

Thank God, Water Works the way it's supposed to. 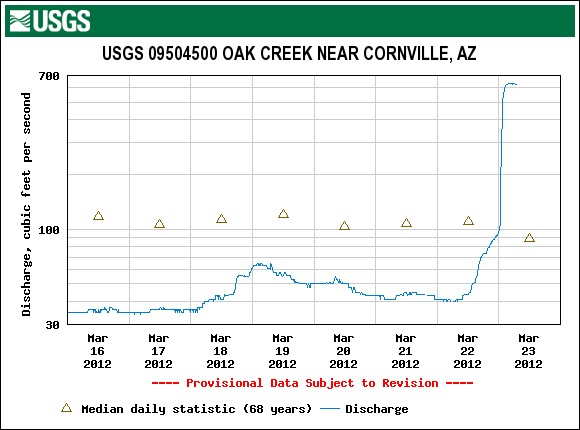 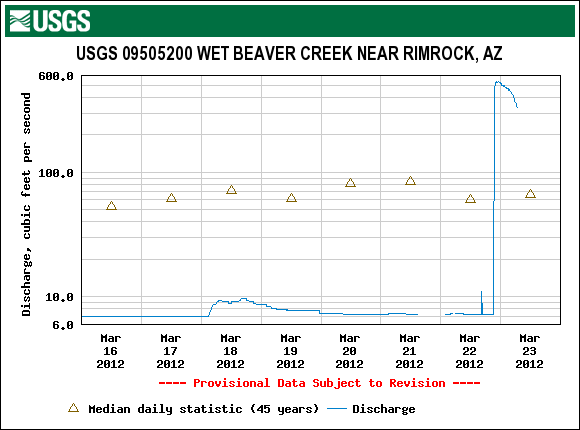 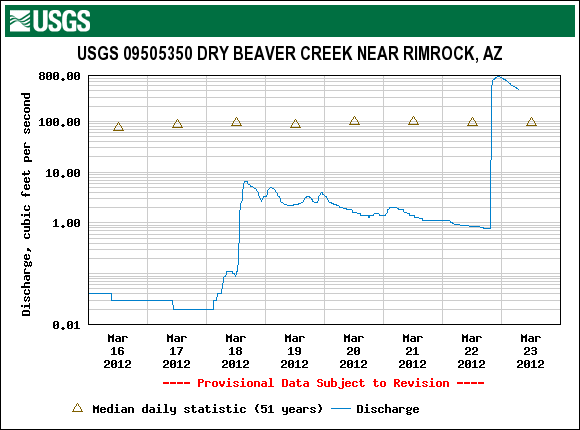 John - I doubt that you doubted your old bad self. You are the river!