This week in Rimrock 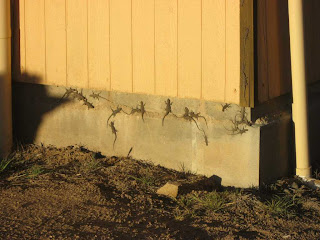 First, Happy Spring. Spring actually sprung here in Arizona on March 19th just before the midnight late Monday. Therefore the first actual full day of Spring was Tuesday, March 20.  Spring came early this year because of the affect of Leap Year.  The Lizards have sure been leaping lately. 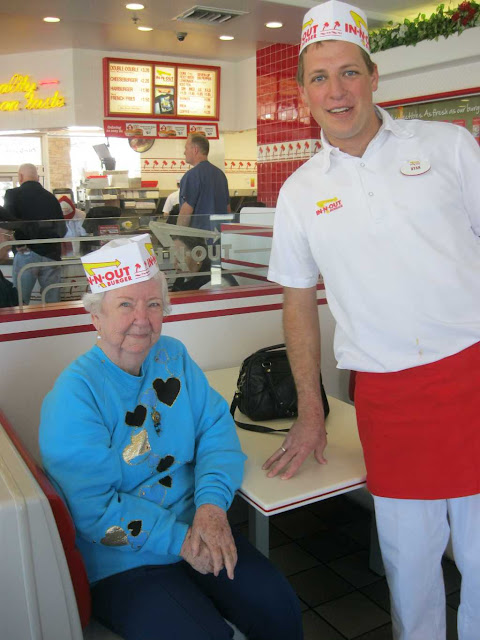 We celebrated the first day of Spring by taking Dear Friend Betty from her Sedona assisted living facility on a 200+ mile road trip.  Betty's step-son, Bob, loaned us his plush Lexus and we traveled over to Prescott to treat Betty to an In-N-Out cheese burger and fries.  There was a lot of snow leftover from the storm and the air was pristine.  It was a perfect day for a road trip.  I sneaked off and told the Manager about Betty and Ryan came over and gave her a hat and treated her like Queen For A Day.  He even hand delivered our order and then later brought a sweet young woman over to also greet Betty. 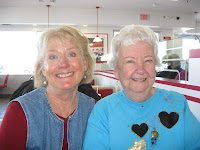 Betty was charming and gracious as always and a delightful road trip travel companion.  There's really nothing like an In-N-Out cheeseburger and fries.  It's a transcendental experience, actually.  Anyway, Ryan gave Betty an In-N-Out sticker to put on her walker so she can really impress all the other residents of her facility.  It was a great day.

On Monday, we visited Cottonwood to meet with Chip N and Bob R. about the Verde River Guide project. It might actually be going somewhere.  Time will tell.  We also worked a little with the Salmon River Guide project.  Our Supervisor there, Jeff C. is leaving Challis to work with the BLM in Dolores, Colorado, where he will play a big role in management of the BLM's portion of the Dolores River below McPhee Dam.

Both Monday and Tuesday afternoon's we readied for our weekly pistol match  Normally the match is held on Mondays but that was out of the question this week so we moved it to Wednesday.  We couldn't have ordered a better day--snow-capped hills and mountains rimmed the horizon.  The air was like crystal and there was no wind.  It was incredible.  Tom, Gary, Brad, Al and I had a great time shooting together.  The conduct of a match takes all day and I didn't wrap up until well after 5 pm. 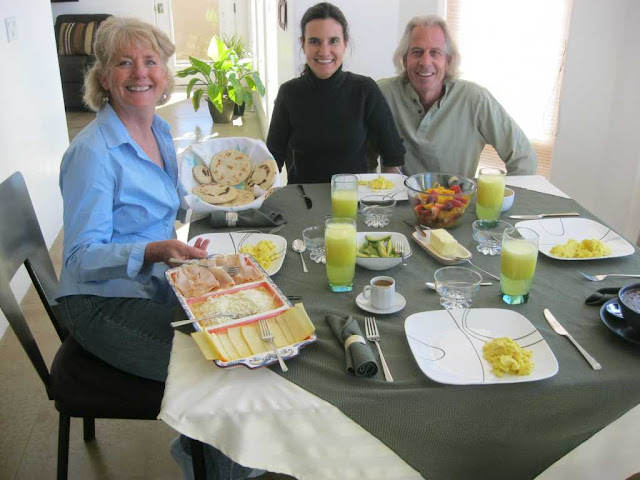 Thursday turned out to be very special.  We started the morning with a great gourmet breakfast at Maria and Tim's beautiful totally green nearby home.  Tim retired in December from a career as a fireman but he could well have been a famous barista.  His creative coffee concoctions are superb.  Maria really set a high bar for breakfast, serving up a special Venezuelan corn bread that's very popular in her homeland.  We enjoyed fine food and friendship until nearly mid-day.  It was a great way to start the day.

Later on we traveled over to Camp Verde.  We fired up Annie & the Poptop for the very first time since we parked them in early November.  Luckily, the pack rats have not damaged anything under the hood and Annie performed splendidly.  Upon our return we fiddled around making props for next week's shooting match and then lit up a fire just before sunset.  Much to our delight, Tim and Maria came to join us and the day ended as it had begun with some wonderfully fun friendship on a warm spring night around a lovely campfire.

Within less than a half hour, we are off to Sedona to meet Jim Bishop for lunch.  He said I have to arrive at precisely 12:05 pm--not 12:06 mind you--12:05.  That's Jim.  We are going to have fun talking about his latest book, "The Pink Nectar Cafe."   Jim actually mentioned me in the book in the second to last paragraph of the "About The Author."  Jim concludes his biographical sketch by referring to the Southwest, "In this place, the land and the imagination are forever merging.  Humans either become part of the land, or they leave.  That's how he (Jim) met Walt, a 1,000-year-old Sinagua Indian skull concealed on a hill near the Verde River.  'Listen to him,' said the legendary boatman Parsons. 'He knows the secrets.' "

Luckily, my new hearing aids will allow me to actually hear what Jim has to say today. Jim talks very softly but wields a mighty pen.

There's lot to do when we arrive back home later today.  Tomorrow, Nancy (AKA: Nemac) will stop by for lunch after her golf lesson.  Then we will head over to Goatherder's to spend the night in our pop top. It will be our one and only shakedown cruise before we head north April 19th.

Sunday maybe we can get some R&R from a busy week.

Have a great day and Many Cheers!  jp
Posted by John Parsons at 11:52 AM

It is also "spring has sprung" here in Boise today. I am recalling that this time last year I was sleeping in Annie and prepping the Cascade Phoenix for its 2nd place finish in the Expert women's class of what was not yet known to be the last Verde River Canoe Challenge. I'm happy to know that you and Susun will be slumming in Annie at Goatherder's abode tonight and wish I could be joining you all. I'd have to sleep with the goats, I suppose, or under a roof overhang. We'll see close to 70 here tomorrow and maybe 77 on Sunday. Might be a day of spring skiing or biking the greenbelt. Many options this time of year. See you late April again.

The goats say you're welcome in under the barn with them anytime. They'll save you a dry spot.