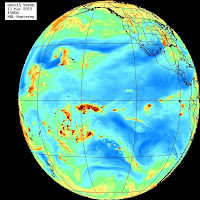 Time once again for a Sunday Morning Weather Report.  (You can click on the little graphic at left for the larger version.)  Here's what the Wonky Weather People had to say this morning:

.SYNOPSIS...FAIR WEATHER WITH BREEZY WINDS AND WARMER TEMPERATURES  WILL CONTINUE THROUGH AT LEAST THURSDAY. WE ARE LOOKING AT COLDER  AND WETTER WEATHER DEVELOPING BY LATE FRIDAY INTO NEXT WEEKEND WHICH WILL BRING WIDESPREAD RAIN AND SNOW TO NORTHERN ARIZONA.

If you take a close look at the US Navy's water vapor map for the Eastern Pacific, you will note two large areas of airborne water heading our way either or both of which could bring a big dump of precipitation to the Southwest by next weekend.

Stasea home on Kauai has been getting really hammered by storm after storm.  The water vapor dumping on Hawaii is coming all the way up from the Equator.  So, we hear echoes of people shouting "Incoming" and we're taking note--'tis time to tackle tasks this week.  No mo procrastinating.  A week from now we could be up to our shoe laces in cold, wet mud here at Second Chance Ranch.  Brrr...batten the hatches!

We've put off all sorts of home owner maintenance this winter and face a daunting backlog of chores.  After the Monday Match is history, we're going to have to buckle down and rip through those chores as fast as we can this coming week ahead.  Lately, it's been all play and no work.  Now it's going to suddenly become all work and no play.  Such is the life of a slacker snowbird.

Speaking of the Monday Match, I am not sure if I've written about that topic.  Here's the story.  As you know we shoot in pistol matches in Idaho under the auspices of the IDPA--Int'l Defensive Pistol Assn.  Down here, we shot in two IDPA matches in Phoenix and one in Indiana.  It costs quite a bit to attend a distance match--probably on the order of $40-$50 for each match.  One day not long ago, we realized we could stage our own informal pistol matches right here at home and have a lot more fun.  So far, we organized and staged four such events and will have fine more (weather permitting) before we head north again.  They are really fun.  Half the fun for us is designing, building and describing the so-called "stages" for each match.  A Stage is essentially a fictional narrative and a layout of carefully choreographed steps which each participant must follow in sequence.  Since the Monday Match has become quite popular with our Dear Friends, we have responded by designing and building ever more elaborate Stages each week.

This past week, our enthusiasm got the better of us and we went far overboard on the stage design phase.  The first stage for tomorrow's match has a complex moving target that spans 20 free-standing feet; a ten by 5 wall structure complete with a window and a door to a retail store.  It's taken untold hours to build this week and will require at least an hour and a half to set up out in the desert at the Monday Match location.  It's a lot like building a set for a stage play only the actors are carrying and shooting pistols instead of the typical song and dance of stage plays.

One of the hilarious ironies of all this work is the huge amount of time involved versus the incredibly tiny amount of shooting time.  For example, tomorrow, we will go to the Monday Match site at 7:30 am and won't return until probably 1:30 pm.  Then we will spend the remainder of the day putting everything away, cleaning firearms and processing the score sheets.  Our total amount of actual real shooting time will undoubtedly be LESS than 120 seconds--that's two minutes for you math-challenges readers.  Folks who are not familiar with this type of fun and games have trouble understanding how someone could spend an entire day in return for a few mere seconds of actual shooting.  There's no real way to explain what makes it so much fun.  Suffice only to say that it is indeed very much fun.  Dear Friend Tom B. said flatly Friday that "Monday is now my favorite day of the week."  Goatherder turned down two paying jobs to come to tomorrow's match.  Go figure.

Well, that's enough chatter for awhile.  Have a great day & Many Cheers, jp
Posted by John Parsons at 10:02 AM