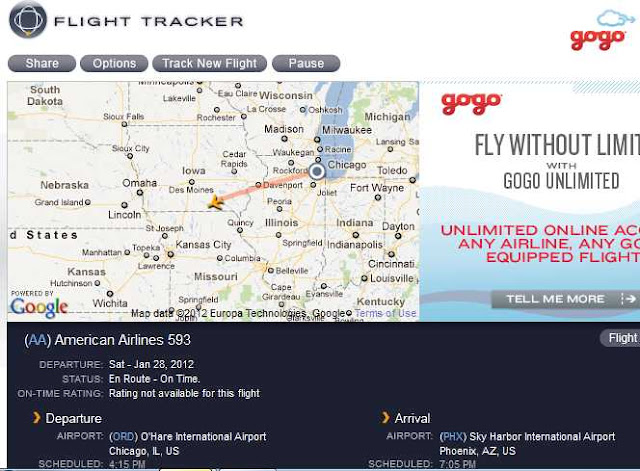 Hey, we made it out of Indiana.  Can yo believe it?  We're kind of stunned and a little dazed about it ourselves.  Well, we're someplace over far northern Missouri right now and it feels great to look out the window to see the rolling Missouri hill country.  YEA!

There are a lot of empty seats on this flight.  There's an American Airlines Captain over in the aisle seat.  He isn't on duty.  He's playing chess on his iPhone right now.  He is in uniform though, that's how I know he is a Captain.  There's no one in the middle seat.  How cool is that?  Well, we're two and a half hours from Phoenix and Sweetie Susun.  Our real Captain said we are going to fly over Gallup so that means maybe I will get to see The Hogans out of my window seat on the north side of the airplane.

Everything went pretty smoothly as far as our exit goes.  I stayed up until 10 pm last night getting things ready and then got back up at 6:30 and just barely made it out to the airport shuttle on time.  We packed that cheap suitcase to within a whisker of its legal weight.  You get 50 pounds for your $25 and this one weighted in at 49 pounds.  We did have to jettison some stuff at Lorna's Place to make the weight cut off.  Oh, well.  Naturally, there was stuff we didn't get done but we really don't care.  What's done is done and what's not isn't important at this point.  The house is listed with a Realtor and it's all out of our hands now.  We can kick back and reflect on six of the most intense weeks we've ever had in this lifetime.

I'm sure there will be the inevitable Brush Fire phone calls and a minor long distance crisis or two before this stage play limps to an end something this year.  We spent about $22,000 during the last six weeks.  Ten thousand was on Mom's funeral.  The remaining $12,000 was spent on my transportation and living expenses and all of the stuff we did on the house.  After deducting for the funeral costs, that means I have spent $2000 a week for the past six weeks.  Whew, spending that kind money makes me dizzy.

I am so glad to be on this airplane heading West to the loving arms of my Sweetie and the Hearthy Hugs of my Friends--not to mention the nightly campfires. Oh, how I have missed those campfires during these past six weeks.

Well, here's a karma story for ya.  So, I was sitting in the Chicago airport and you know how they have these giant big screen TV's overhead everywhere.  Well, I looked up--no kidding--and there's this flipping ground hog on the screen and then they cut to a scene from the movie itself and there's Bill Murray standing in front of the camera doing one of his patented performances from "Ground Hog Day."  YIKES!  The metaphor is chasing me!

Well, we have tons of photos we want to post up here but those will have to wait.  Just wanted to say HI from high in the sky.  In the time it took me to write this post, we flew completely across Missouri and now we're in Kansas.  Pretty soon, I will get to say, "We're not in Kansas any more, Toto!"

Note added at 5:30 AZ Time--We definitely won't get to see The Hogans--it will be dark.  But right now we can see a fabulous sunset over The Front Range of the Colorado Rockies.  They are SOOO beautiful to look at etched on the horizon in this kind of evening light.  It's sure a welcome sight to see.  I tried to take a photo with no luck. Ah, well, we have a snapshot of it in our mind.
Posted by John Parsons at 4:25 PM

I second that welcome home to Airy Zona.

Here's to waking up with Bill Murray looking in your window!