Most of us remember the cult film "Reefer Madness." Well, it's too bad I can't put together a short video called "Reefer Happiness," concerning an entirely different kind of reefer--a real refrigerator. Yes, some people actually call refrigerators "reefers." No kidding, they really do.

Well, here's the story. Dear Mom filled her fridge with perishable food and then let it all spoil inside the fridge. The unit was in such incredibly bad shape, none of us wanted to even go near it, let alone actually open the door. I took one look inside and shut the door as fast as I could. The smell coming out of the fridge can't possibly be described. Words don't exist to describe smells like that. We all talked about the fridge for days--wondering how the heck to deal with it. Finally, Angel Doug took the bull by the horns, donned a special respirators and emptied out the mess inside. What a Hero! That took amazing courage--far greater courage than I could ever summon. Well, after the fridge was emptied, it sat there exuding an ominous odor even with the door closed.

A day or two later, Angel Ginny showed up to assess how she might help out. When she saw the fridge, she asked, "What's up with that thing?" I told her the sad story and how we were trying to find someone to pay to haul it off. Ginny said, "Oh, don't do that, I want it." Are you kidding? Surely you have lost your mind? Are you off your rocker, Ginny? But no, Ginny simply smiled and said, "Don't worry, it will be OK."

Little by little, Ginny tackled the fridge and soon it was cleaned of the many caked layers of old rotted food that coated everything inside the fridge. Then she put in a ten pound bag of charcoal spread out in layers throughout the fridge. We left it sit running for a few days. On Saturday, January 7, Ginny brought out the big Habitat for Humanity truck and Angel Doug helped her load it. Doug said he almost had a coronary moving the impossibly heavy thing. (That was just a few hours before Doug fell off a ladder at his home and broke his heel. It was the last thing Angel Doug did at Mom's house.)

Well, Ginny carted the fridge off to the Habitat ReStore. I stopped in a few days later and took the photo you see accompanying this post. Ginny was all smiles. She said, "Open the door and stick your head inside, John, and tell me what you smell." Well, it was with GREAT hesitation that I opened that door. LO! There was no smell. In fact, the fridge smelled like new. Ginny said two Habitat volunteers spent a few hours detailing the fridge and taking off every panel and cleaning every little tiny nook of the unit. I noticed she had put a price of $225 on the fridge. I asked, "Do you really expect to get that much money, Ginny?" Oh, sure, she replied, no problem. I just shook my head. "No way," I mumbled to myself.

Well, I took out a couple of items to Habitat yesterday and walked in the front door of the ReStore. Ginny was behind the front counter all smiles. "It sold, John," she beamed. I stood speechless, utterly dumbfounded. "NO WAY," I proclaimed. Yep, Ginny said it sold the first day she put it up for sale, not long after she moved it onto the sales floor. The buyer paid full price and didn't quibble and had it loaded and gone in a blink. Ginny said he was SO very happy to have it. Of course, Ginny was SO very happy to have another $225 for the Habitat program. And Little Yonni is SO very happy to be able to tell this very happy story. So, there you have it--Reefer Happiness. 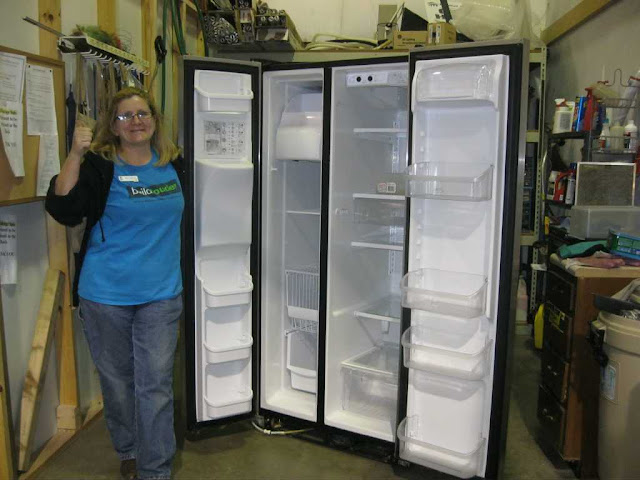 And yet another cool story...cool, get it? Haha
BTW. that is the exact same fridge I have.

And Joh, you can write off the donation for the price that Habitat got for it, since you actually know what it went for. Kudos.

Charcoal and baking soda do wonders.