Saturday's sunset was one of the more unique and unusual sunsets I've ever witness.  The clouds began turning pink over Missouri and then the Rocky Mountain horizon was etched in the evening sky.  Surreal shades of colors played on the darkening Southwest landscape.  But the wildest of all was seeing a wonderful afterglow of the sunset still shading the western deserts as the plane approached the twinkling lights of Phoenix. This means my sunset on January 28th lasted from Missouri to Phoenix and spanned over two hours!
Last night's sunset started out as a non-starter.  A real yawner.  The only interesting thing about the sun dipping below the horizon was that it disappeared from sight at 5:45 pm, a full 45 minutes later than the day I left back in mid-December.  It's great to have the later sunsets now.  When the sun goes way near the solstice, it leaves with a thud.  It turns to dark pretty quickly around the solstice.  Now, the evening dusk lasts a lot longer.  As we stood around enjoying our first campfire, it was the eastern skies that put on the first show. Georgia O'Keeffe pastel clouds tinted the whole sky.  And then, the western sky cut loose in a patented mid-winter display.  YEA--we're back in Ol' Airy Zonie again! 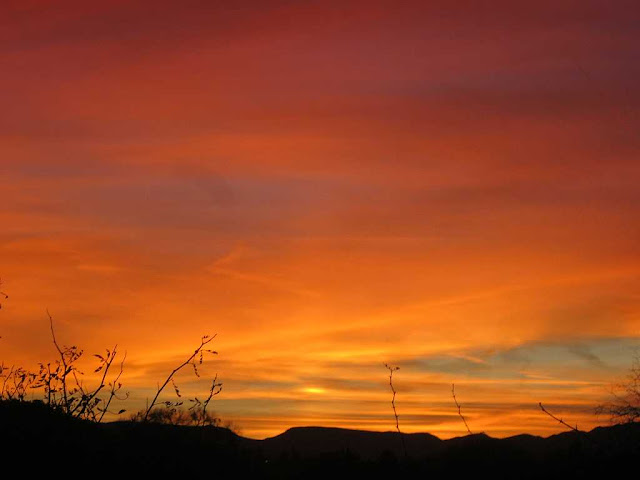