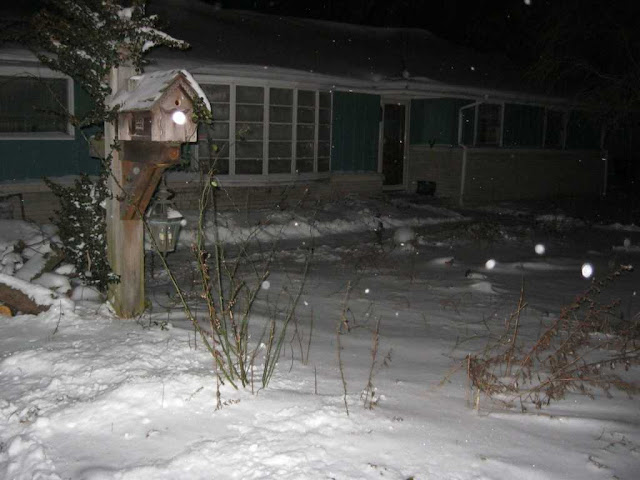 Snow plows, snow blowers, snow shovels, below zero wind chill, blowing and drifting snow, skating rink ice on streets, fender benders galore all have one thing in common--a normal Indiana January.  We're back to normal now and everything is feng shui here.  The wind chill is two below and chimney steam and smoke are blowing horizontal in winds gusting as high as 30 mph.  Yep, this is the type of Indiana January weather we have grown to know and love (Not!).  This area really doesn't get that much snow.  This particular storm is progged to leave perhaps 4-5 inches here.  However, the wind is usually ripping when it's snowing and so the snow blows all around and drifts and piles up and seems a LOT deeper than 3-5 inches.  Snow has an uncanny ability to only drift and pile up where you walk.  You can look at other nearby areas and they are nearly blown clean but they don't happen to be where you walk.  Maybe snow here is Smart Snow, who knows?

Yesterday was a real adventure being out on streets that were coated with pure ice, the kind of ice they love to have in skating rinks for hockey players and little kids dreaming of being Olympic stars.  I saw more fender benders yesterday than I can count this morning.  I also narrowly dodged one almost certain fender bender myself.  Luckily, I noticed the other guy driving way too fast toward his stop sign and knew he wouldn't be able to stop.  I swung way out into the other lanes as he slid through his stop sign turning sideways right where I would have been had I not taken evasive action.  It was definitely adventure travel out there yesterday.

Likewise, we had another dose of adventure travel this morning.  We woke up before 5 am with the panic realization we forgot to turn the heat on in Mom's house last night.  We've been keeping it off during the recent tropical weather to save on the gas bill.  Well,we forgot to turn it on yesterday when we left the house.  We looked at the online weather site and it was 16 degrees at the time.  It's 13 or 14 now.  Anyway, we didn't even brew coffee--we were outta here like a cannonball from a pirate ship.  Well, trust me, Lafayette city street crews aren't exactly at work at 5 in the morning.  Most of the streets and intersections hadn't been plowed or salted.  YIKES!  Luckily, this is a city that sleeps in so there were few people driving at that time of the morning.  Most of them appeared to be pretty savvy winter time drivers.  Well, we put Mom's house back in the safety zone and checked all the pipes.  None had frozen--at least yet--that we can tell.  Then we shoveled the sidewalk and driveway and went back to our rented room.  A chicken noodle soup breakfast never tasted so good!

Here's an interesting reflection on the weather we experienced here.  Somehow, by some miracle, we were able to tackle the clean up of Mom's house during a record-breaking heat waves in an Indiana January.  What are the odds of that type of weather happening here?  The odds are Slim and Non and Slim just left town, as they say.  Anyway, the guys who bought the contents of Mom's house loaded the bulk of teh stuff on the day with the highest temp--53 degrees.  They loaded up the final stuff two days ago just on the edge of the incoming storm.  It started to drizzle as they pulled out of the driveway. Yesterday, Ed and I removed the last bits of trash and detritus from the house, making a huge pile out front for the city to pick up today.  Also, I took 11 boxes to the Post Office and spent $110 in postage to mail them to Idaho Falls.  (Thanks go to Houn' Dawg for holding them until May when we return.)  As I made the second trip to the Post Office, the snow had started to fall.  When Ed and I finished the last of the trash hauling, the snow was deep enough for us to leave tracks in it.  This morning, the placed is essentially snowed in.  By some incredible miracle, we were able to get this entire incomprehensibly difficult job done within a few hours of the onset of terrible January weather.  Totally amazing.

Well, have a great day & Many Cheers! jp
Posted by John Parsons at 5:44 AM

Your mom's house looks to be 1950's or 1960's era Ranch style and similar to my Boise house. Anyways, your description of Indiana, and I might add, Illinois typical winters is spot on. Couldn't have said it better. If ones idea of great winter weather is driving on a skating rink without the Zamboni, that would be our fine midwestern states we both were raised in. Crystal clear ice encrusted tree branches, much like icesickles with a sticky treat inside.

I'm sure Susun looks forward to your return. Which may be just in time for winter to hit the west, actually.

I knew you'd get another cool story out of it.
You were blessed to have such nice weather.