The Shortest is The Longest 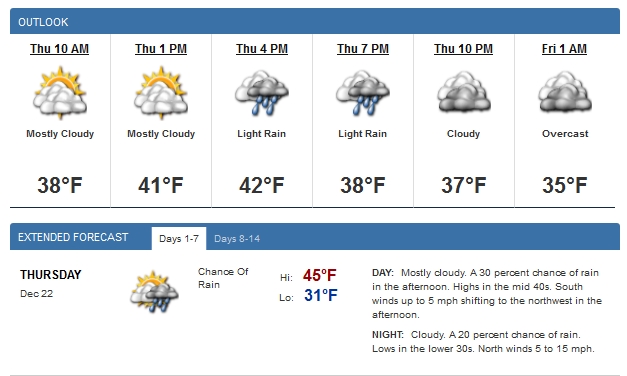 Winter Solstice Greetings!  Somehow it is poetic that the year's shortest day will be my longest day.  As I am writing this, I see it is a little after 4 am  Arizona Time.  It's just after 6 here.  Somehow, the end of today seems like a long, long distance away.  Although I am very sad about my Mom's passing, I must admit, I will be very glad when this day is done.

As I lay awake before arising this morning, I thought back to last year, when the Solstice marked what we thought was going to be the first event of an annual tradition.  You can click here to see the post about that fine party hearty. How ironic a year later to be typing on a little netbook in the small upstairs bedroom of an older home in a nondescript Midwestern neighborhood.  Ah, the twists and turns of the daze of our lives!

It's been raining here for the last couple of days.  It hasn't been heavy rain--just all day rain--the kind of light 24/7 rain for which this area is famous this time of year.  I think Mom arranged a hole in the clouds today for her funeral and burial as the rain is supposed to take a break until later this afternoon.  As you can see by the above graphic, it's supposed to start raining again shortly after we leave the cemetery.  Thanks, Mom.

I checked today's online version of this city's daily newspaper and there's no earth shaking local news.  There is, however, a story that's appropriate for the day of my Mom's funeral.  It's about how a 200-year-old oak tree got saved from destruction.  Mom would have been so happy to read that story. You can click here to read it. Anytime a tree was saved was cause for much joy and happiness.  She taught me to love old growth trees decades before they became a Cause Célèbre. Mom was a tree hugger before anybody thought it would be cool to hug a tree.

I spent over six hours yesterday writing her "long" Eulogy.  The priest is giving me only five minutes today for her "short" eulogy.  At the rate I speak, five minutes equates to 300-400 words.  I haven't written the short one yet but will do so soon.  Time is of the essence, as they say.  It won't be hard to write the short one.  I mean what can you say in fine minutes?  "Hi" and "Bye" is about it.  Well, anyway, I told the priest that I was doing a long eulogy and I was going to pass it out to all those in attendance.  He told me I could only put it on a table and let them pick it up if they wanted it so it wouldn't become litter in the pews.  Well, I am passing it out by hand.  What's he going to do?  Kick me out of the funeral Mass?  I doubt it.  Anyway, the long eulogy printed out at 16 pages, including one page with two photos.  Heaven only knows how many words are in that 15 page narrative.

The eulogy is all about The Gifts of Life of Mai G. Parsons.  That's way different than the typical "celebration of life" that most people do. I actually itemized the gifts and then described each of them.  Susun was real jazzed after she read it and wants to make a book out of it.  Um...I dunno 'bout that.  We shall see.  It's pretty good, though, I have to admit.  Susun says it's the best thing I ever wrote.  Mom's best Friend back in Virginia flipped out when he read it and basically said the same thing.  Who knows?  Anyway, I guess I have to give the priest some of the credit.  If he had put me on a Eulogy Diet, I wouldn't have written the long version.  I would have just done a nice verbal eulogy and called it good.  Interesting how things work out like that.

Catholics are real big on ritual.  That's not to say other religions aren't.  Nope, everybody loves rituals.  But Catholics take rituals to the next level.  They dote on rituals.  Catholic rituals have to be really carefully choreographed.  People get all weirded out if the ritual doesn't follow precise protocol.  The woman I am renting this room from asked me last night if I was nervous.  I told her the only thing I was nervous about was whether the ritual would follow the script and not p-off the priest.  When we met on Tuesday he was real big on making sure I understood the precise order of how things had to go, you know what I mean?  Yes, Father, I know what you mean. I get your drift, Honest, I do.  Yeah, so that makes me nervous.  But, other than that, no, I'm not nervous.

I was getting a little panicky yesterday when I felt I wasn't going to be able to get the long eulogy together.  It was coming down to whether I could process the two photos I needed.  I was in a CVS pharmacy and it was clear I was panicking.  The clerk came over to me and said, "Mister, SLOW DOWN!"  I told her the situation and she said, "Well, being in a hurry is only gonna make it worse.  It's gonna be what it's gonna be so just slow down and take your time and it will all come together."  She really gave me a good ol' Hoosier lecture like people are wont to do here in The Heartland.  She even shook her pointed finger at me.  Well, I was duly lectured and chastised so I slowed down and, you know what?  She was right.  Everything came together just fine.

Speaking of serendipity--how's this one for you?  So, I arranged to rent this room way back last July.  It's a long story best told around a camp fire.  Anyway, I get here to Lorna's Place and it turns out she is a full-time printer and has a big time print shop out in a separate building in her backyard.  So, she printed up my eulogy yesterday but didn't get around to it until like maybe 6-7 pm.  Then I needed some more stuff done and she just casually walks out back and gets it done and brings it back inside like she was casually taking out the trash to the alley or something.  It's really cool to be renting from a printer.  Maybe I will have to think up some other stuff to get printed.  Anyway, if I would have had to work with a printer who kept 8-5 business hours, there's no way I could have been able to pull this one off.  It was only because Lorna works whenever she feels like working that we were able to put together a sixteen page eulogy.

And speaking of that eulogy--as usual, I am certain there are some fugitive typos lurking in the eulogy. I have an Aunt and some cousins who are real ball hawks when it comes to typos.  I figure they will hunt down and "X" off every steenking little typo for me.  Heck, I will have a church full of proof readers, for that matter.  They won't be mourning Mom, they will be shaking their heads over what a bad speller and typer I am.  They won't be thinking of the deceased. They will be muttering under their breath about what a dog brain I am for messing up a perfectly good word.  I know what they will be thinking.  This is Indiana, afterall, and I know how they think here.  Typos can drive people to insanity here in Indiana.  It's been known to happen.  When I was a newspaper owner and editor in Zionsville, I lived in fear that certain old ladies would go postal over my typos and come into the newspaper shop and eliminate all of us.  I've never seen people get so worked up over a mangled word or two.  What's the big deal?  But, I digress.  Anyway, since I will have a church full of proof readers, I feel certain that I will be handed a fully proofed version of my eulogy at the end of the mass--with all the offending words neatly crossed through with a red or blue pencil, depending on just how badly the word was abused by the eulogy writer.  THEN and only then can I do the final version of the eulogy.  That's the version you are going to see--the one with no Forrest Gump mistakes.  Stupid is as stupid does, remember?

Some of you astute LBRs know what is going on here this morning, don't you?  Yeah, you're right.  I am procrastinating.  It's a heck of a lot easier to write this blog post than it is my short version eulogy.  But it's nearing 7 am here and I have been lucky enough to be able to procrastinate now for almost 45 minutes.  What a luxury.

Soooo....we gotta go.  Enjoy the Winter Solstice as best you can in whatever way maximizes your joy. Hoist a toast to Dear Mom and remember, YOUR longest day is only six months away on the Summer Solstice!  Me? I get to have 'em both on the same day.

(Editor's Note:  This update was added three years later on December 22, 2014.  Here are the links to the eulogies

Long 15-page version passed out by hand before and after Funeral Mass:

You have much to attend to today and you have all the attributes that will make your mom so proud. She is there with you, watching you as you plan and smiling as you buck the system even now.

I'm looking forward to reading the 16 page eulogy,spelling errors and all. It's what's in your heart that matters. By the way, I feel your stress and admire the way you have dealt with it. This blog post is one of your best. Mai would be honored to know you put your heart into reflecting well on her life.

Peace be with you and Susun and Mai on this Solstice.

John, your blog was an inspiration. My mother will turn 95 next year, and I spend precious (for both of us) time with her every day. Yesterday she taught me how she makes Million Dollar Fudge, something I will pass on to my kids someday.So much to share, so little time. Thank you for your example. Safe journeys.