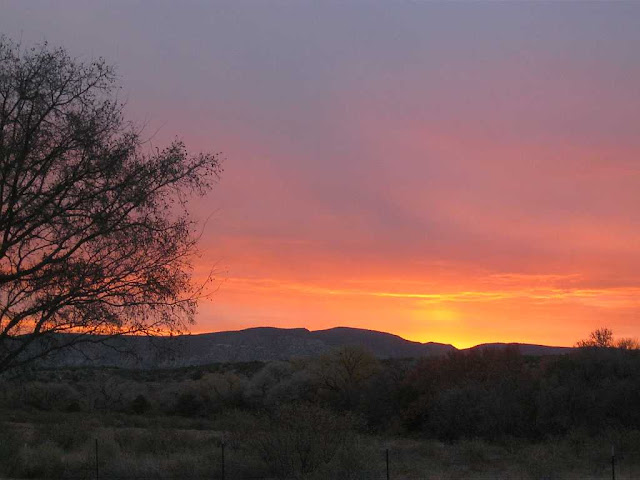 Gee, only 24 days to Christmas!  We worked our anatomy off yesterday.  It was our goal to be completely finished with the fall session of Weed Wars no later than November 30th and we barely made the deadline.  We spent nearly 8 hours cutting, whacking, raking, hauling and all the rest.

Mesquite trees are one of earth's most tenacious species.  They will survive practically anything.  About the only way to destroy them is with a large backhoe and even that's not a guarantee they won't come back.  If you prune a mesquite, the tree gets really upset.  It then proceeds to send out an explosion of wicked shoots from the point of your pruning.  These aren't ordinary shoots.  Nope, somehow the mesquite's DNA is wired to equip these shoots with the most wicked thorns you've ever seen.  They are as sharp as razors and will penetrate anything except pure THICK steel.  Working with mesquite sucker shoots as we call them is one of the two worst aspect of our Weed Wars.  I have scars all over my arms from these hideous shoots.  Luckily, yesterday, I somehow avoided any further physical damage from the thorny shoots and didn't donate any blood to the mesquites.  Susun wasn't so lucky.  She got swiped across the face but fortunately the thorn didn't extract an eye for an eye style vengeance.  Weed Wars is just plain old hand-to-hand combat in the trenches.  It's the toughest work we do here and easily the toughest work we do anywhere, for that matter.  As we joked yesterday, our Second Chance Ranch Weed Wars make mowing the lawn in Idaho Falls seem like a picnic in the park.  Well, anyway, we're done for the fall season.  Our next episode of Weed Wars will commence in March when the new crop begins to sprout and we once again don all the chemical spray apparatus and head back to the springtime Weed Wars front lines.

One thing that Weed Wars does is my me feel my age.  Most of the time I don't feel like I am 64 years of age.  The morning after the final battle of Weed Wars, I feel 84 instead of 64.  It's hard to move around, all the muscles are sore and we walk with a gimp, a limp and a hunched back.  OK, enough already.  It's done.

At some point during the battle yesterday, we had a sudden brainstorm.  When the day mercifully progressed into Happy Hour, we were able to shift our focus and think outside the box on the earth oven project.  We eagerly disassembled the whole thing--stripped it down to the cinder block foundation.  Then we put it all back together again with a totally new configuration.  It ROX!!!

Here was the brainstorm in a word: Propane. Why does an earth oven have to be heated with wood?  Is there some rule someplace that mandates a wood fire for an earth oven?  If so, who enforces this rule?  Why can't we heat our earth oven with propane?  Will we get a ticket from the earth oven police?  Who cares HOW we heat our earth oven?  Why would radiant heat from a fire be any different than propane heat?  An oven is an oven, right?  It's all about the baking temperature and the relative consistency of that temperature.  If you want to bake at 350, you really want your oven to hang at 350 to thoroughly bake your food, right?

So, we totally re-designed the earth oven and embedded a propane heat source below the oven chamber.  Then we built a really nice oven and topped it off with a lot of adobe block thermal mass and, voila, we got a winner!

Luckily, we remembered to put on a full face shield and wear two long sleeve shirts when we lit the oven.  KA-BOOM--you should have seen the fireball that lit up inside the oven.  Hopefully, we will figure out a safer, saner method of lighting propane in a confined space.  Luckily, there were no witnesses to the pyrotechnics and we survived none worse for the wear.  Meanwhile, the little oven heated right up to 250 degrees and then slowly climbed to 350.  After 90 minutes it eeked its way to 400.  It's a righteous oven and is definitely the design we're going to go with.  We finally have our so-called "proof of concept" oven complete and now we will move into the final design and construction phase.   There's absolutely no doubt the oven will be baking stuff soon and be totally complete by the New Year.  Even as tired as I was last night, I actually danced a jig in front of the oven--it made me smile and laugh and it was really exciting to get something workable up and running.  We are very excited about it. 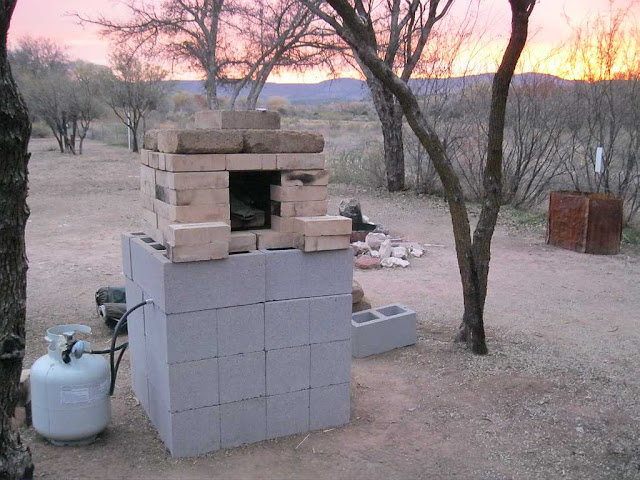 I think the idea of an earth oven is not to use fossil fuels, hence wood which is naturally occurring and renewable resource is used to heat said earth oven. But if your idea is simply to bake, there is no fowl in using propane. Just call it a cinder block and rock oven and quit calling it an earth oven, cause it isn't. Okay dokey?
Shoot, just us the oven in your stove in the house? I mean, it's calibrated to bake and you can check the oven temp so much easier. And doesn't it operate on propane, too. It's not like there is a heat wave at Camp Verde right now. Cheers, and happy baking. I can smell something good already.

Aren't Earth Ovens made of earth - rounded on top with a hole in the side?
That contraption doesn't look like it belongs in your natural yard.

Please send your Rimrock address by E-mail. I don't use the Google set-up any more. They didn't like my choice of passwords.

I disagree. It's an earth oven if it's covered with earth, which it will soon be. My earth oven is stalled as I've been trying to replace my inside range for weeks now. The old one will soon be made into renewable Toyota fenders, or something. My goal is to have the new range in to cook for Christmas, we'll see.
Dutch oven prime rib? Sounds like a steep learning curve to me, but I'd try it in Yonni's gas-earth, Gearth Oven.