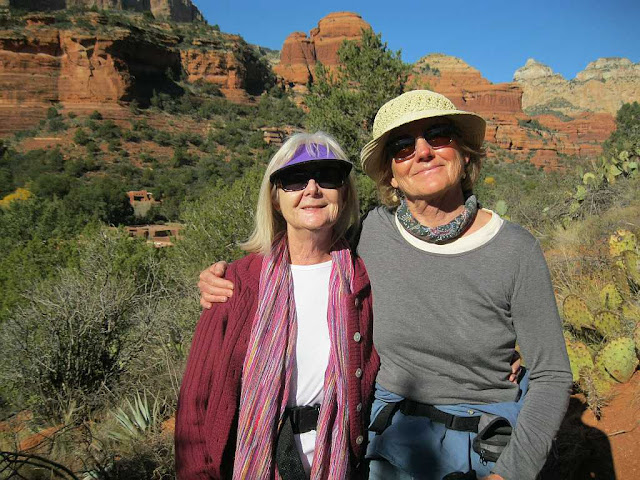 We now each take off on our own tangents each Tuesday.  The blog author heads off to the Tuesday Morning Target Shoot which begins at 9 AM.  Now, Susun has her own tangent to travel--The Tuesday Trek.  Susun's Dear Friend Phyllis (above left)is the organizer of a hike every Tuesday morning. 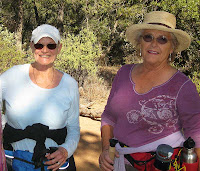 Yesterday, Susun joined Phyllis and her friends: Sandy (left) and Joan.  The foursome enjoyed a six mile, two hour hike to the end of Boynton Canyon and back.  Boynton easily ranks as one of the most special of Sedona's many special places to hike.  At various times over the past 25 years, Boynton has received copious coverage as an "official vortex," a "power spot," a "sacred place" and is even thought by some to be connected by secret underground "power lines" to Stonehedge and other purported global power spots.  It's a fact that The Yavapai-Apache Nation considers Boynton one of its most special sacred places.  Seekers of both enlightenment, Red Rock Beauty and just plain old simple solitude often co-mingle on the popular Boynton Canyon Trail.

The mouth of the canyon is covered by the world-class Enchantment Resort.

A room there will set you back only about $300-400 a night depending on amenities.  Sunday brunch is relatively affordable at maybe $100 "out the door" for a couple.  Having such a lah-dee-dah resort sitting smack in the mouth of the Canyon makes for an interesting juxtaposition of metaphors on this hike.  Susun had a really fun time and was chattering about the hike throughout our fine Happy Hour Campfire last night.  Imagine, the blog author wore a t-shirt at the fire until well after sundown when the evening chill finally forced him to don a jacket.  It's been unseasonably warm here for the past few days so the ladies really had optimal conditions for their Tuesday Trek.

The Tuesday Target Shoot was fun as always.  Afterwards we traveled over to Cottonwood to get a fresh chain for the chain saw.  Naturally, we couldn't resist shopping at a lot of other stores, too.  Monday we made great progress in our annual Weed Wars.  Every tumbleweed was burned to ash.  Most of the prickly nightshades are gone.  We fully expect to have the grounds completely polished by the end of today.  It's going to be a Major Grunt Day for sure but that's the only way we are able to get it back in shape.  It's just part of being a weed wrangler here at Second Chance Ranch.

There's been no progress on the earth oven project but we did at least roast up another batch of green chiles on the Patio Caddie last night.  They sure will liven up the scrambled eggs this morning.

Have a great day and Many Cheers!  jp

PS--After writing the morning blog post, we began perusing online editions of local newspapers.  Much to our delight, Ace Reporter Steve Ayers did a fine piece on Bill Cowan's first book.  Congratulations, Bill!  Click here to read the article about Bill's book.
Posted by John Parsons at 7:30 AM