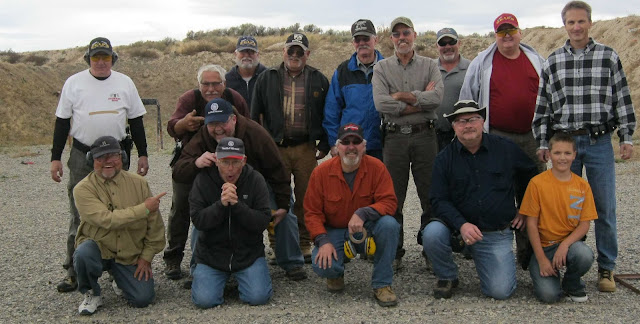 Yesterday was our last ICORE pistol match of 2011.  The acronym means "International Confederation of Revolver Enthusiasts."  There really aren't too many people who shoot revolvers these days.  Everyone wants to shoot automatic pistols. Revolvers?  Not so much. The group you see above is about all there is in Eastern Idaho--at least those who care to compete with each other.  It's a lot of fun to shoot with these guys.

Yesterday was very special because Mike and his son, Chance, participated in a competitive pistol match for the very first time.  Bear in mind that basically NO young people want to shoot old-fashioned revolvers.  How passé, as they say.  The guys who shoot in ICORE like to boast that the group is only for Old Fat Guys because they are the only ones left who care about revolvers.  So, having Mike and Chance show up to be viable competitors was a huge breath of welcome fresh air.  There probably hasn't been a 13-year-old shoot in the Eastern Idaho ICORE in its entire history.

Having shot with Mike and Chance a few times this summer and having known Mike for four years now, we knew Chance would do very well.  However, the other guys didn't know what to expect.  You could almost hear everyone hold their breath when Chance stepped to the firing line for his very first stage.  As soon as he started shooting, you could hear a collective exhale and see everyone relax and smile and nod to each.  Chance is a young male Annie Oakley and at the end of his first stage, one Old Fat Guy (not me) yelled out "WAY TO GO, KIDDO!"  Many of them actually went over to Chance to slap him on the back or shake his hand or say something real nice, at least as much as Old Fat Guys know how to make nice.

The second stage was a real whopper--42 shots--by far the longest stage I have ever shot in a match.  Shooting forty-two rounds in a single stage is basically unheard of and it requires a lot of logistical management, razor sharp focus and attention to lots of details.  Chance performed flawlessly, as well he did on the remaining two stages.  Altogether the pistol match consumed about 120 rounds.

Chance was shooting a very heavy, long-barrel .357 revolver and he didn't tire out--his aim held straight and true throughout the five hour event.  When the results were emailed out later last night, Chance ranked fourth overall in terms of his accuracy.  His accuracy was better than  people there who have been shooting three or four times as many years as Chance has been alive.  Chance actually beat his Dad's time on two of the four stages, too.  (Accuracy and time are measured separately in an ICORE match.) Mike did real well, finishing ahead of me by 17 seconds and impressing the ICORE regulars.

The fellow at left below is Elden Dalley.  He's the Match Director and also the founder of the Eastern Idaho chapter of ICORE.  He's one heck of a pistol shooter and routinely finishes first as he did again yesterday.  He would make Wyatt Earp slink off the OK Corral playing field.  Elden gave Chance some hearty congratulations at the end of the match and said later in an email, "Chance is a great kid that will undoubtedly make all who know him proud."  Mike was practically glowing after the match and sent an email later in which he said, "The most important thing to me though is several times on the way home Chance told me 'I had a LOT of fun today...I mean REALLY a lot of fun!'."  It was definitely a Dear Diary Day experience.  THANKS, Elden, for making this sport possible and THANKS, Mike & Chance for giving it your best shot! 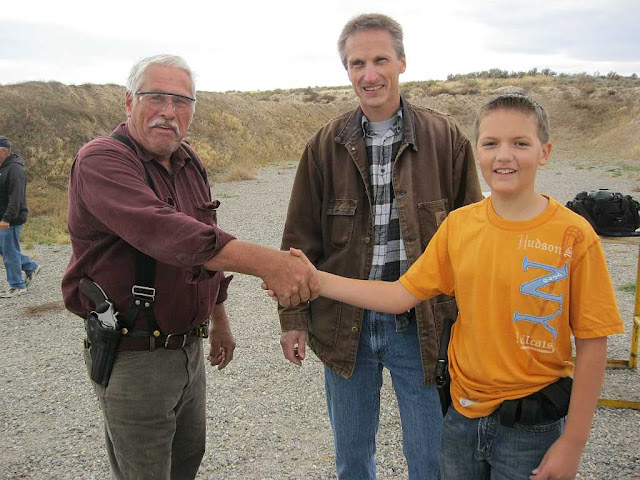