A Tale of Two Yards 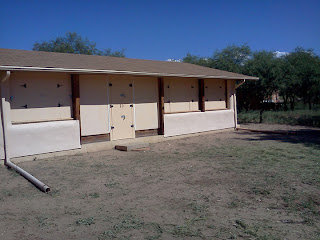 Thanks to Joshua and The Goatherder, our Arizona place--Second Chance Ranch--looks one heck of a lot better this morning.  Joshua and GH formed a two-man SWAT team yesterday and attacked the stubborn weeds with vengeance and determination, making a major difference in a mere hour of hard labor.  The so-called "yard" at 2CR is just dirt.  It's always been dirt except when the weeds take over.  Weeds are the only thing that has ever grown there, as far as we know, dating back hundreds of years.  Chances are weeds will continue to be the only green in our so-called "yard" there for the rest of our lives and maybe all time, for all we know. 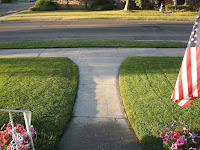 The two yards in our lives couldn't possibly be more different.  One is pure dirt and nasty, prickly weeds.  The other is pure green grass and primped and prepped to totally Type A condition.  Ironically, yesterday while Josh & GH were hacking weeds, we hired a guy to edge our yard up here in River City.  Now it looks even MORE Type A that it did before.  There's something about green grass that really brings out the Type A aspect of some people.  Down in Arizona, we don't care if your yard is dirt.  Up here, the yard has to be "just so."  It's a Jeckle-Hyde kind of thing.  We sent the photo at left to GH last night and he replied, "Purty, but something about it makes me want to grow really tall pigweed..."  That's the way it is with Arizona people.  Most of them have grown so accustomed to yards of dirt and weeds, they wouldn't know what to do with real green grass.  If GH moved to Idaho Falls, he would probably tear up the grass yard and grow native species that closely resemble ordinary weeds.  THANKS, Josh & GH!  Ya dun good!

Well, it's a little more than an hour later and we are now back to blogging.  It was time for our Sunday Morning Bicycle Ride and when duty calls, the blog takes a back seat.  We rode down to Hilda's and then over to Bella Vita for a real tasty breakfast.  Idaho Falls downtown is totally deserted on Sunday mornings--a stark contrast to the other six days of the week.  The geese flying overhead far outnumber the vehicles on the streets.  The river is glass calm and smooth this morning--wonderfully beautiful.

Yesterday unfolded as advertised.  Winter squashes abounded at the Farmers Market for a mere 35 cents a pound.  You can't really grow them than inexpensively considering how much garden space they take up.  We learned a lot at the Nursery and enjoyed a splendid time at the power company's open house.

Susun poses in the photo below beneath our beloved water tower.  It's funky, that's for sure.  We know one LBR who would dearly love to see it painted something less garish than the red, white and blue stripes.  However, it's so funky it's really appealing to both of us.  Whenever we travel anywhere, we play a game to see who is the first one to see the water tower from a distance.  It's sort of like a giant push pin in the 3-D terrain of the Snake River Plain.  It's actually easier to spot the water tower than it is the soaring LDS Temple here.  Anyway, we will know think of this photo every time we play "Spot The Water Tower" in the future. 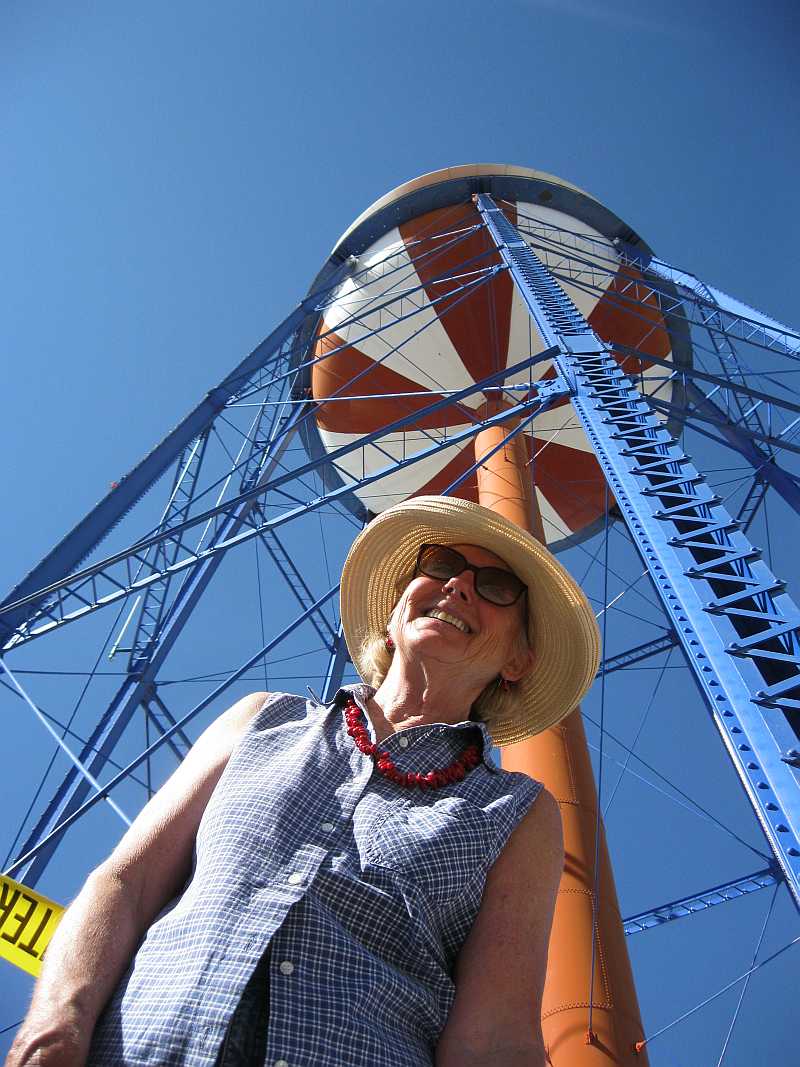 Awe come on, Johnny, you could have a purty yard in AZ with native plants,too. But during that several month hiatus when you are gone that summer monsoon rain would indeed bring on the weeds and they'd still have to be picked. That's why landscapers and yard maintenance folks became popular for folks with two homes! Either they are mowing, weeding, or shoveling snow. Makes no difference to them, just the adjacent neighbors. I bet Gary begged GH and even bought him beer to do your yard:)

We're not done yet neither. Gonna edge it next weekend ;-)

My next door neighbor has pretty grass. He's always out there messin' with it. Spraying, mowing, edging, watering, fooling with his sprinkler heads, hunting down and killing dandelions. No thanks!