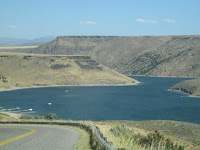 Sunday turned out to be a very nice day.  We started off with a really nice bike ride down to Hilda's Garden.  It's at the final peak of color of the season.  From here until the first frost the colors will begin to slowly decline.   After Hilda's, we pedaled over to the Bella Vita coffee house for breakfast.  What a special spot that little place is.  It's so cool to be able to have a first rate coffee house as a bike ride destination. 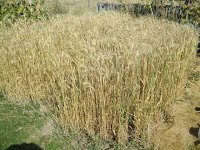 After the bike ride, Susun went off to meet with Jan M. at Community Park and the pair walked three miles while chatting about all sorts of various topics.  Little Yonni logged his 13th consecutive daily session on the treadmill.  That 15% grade is feeling a lot better and easier to endure.  That bodes well for our upcoming hiking season. 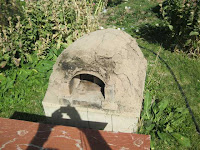 When Susun came home she was al ljazzed about going someplace--anyplace.  Houn' Dawg had invited us up to Sand Creek Pond #4 but we just didn't feel like driving on the busy US Highway 20 up to Ashton.  By and by, we decided to go check out the Blacktail boat ramp at Ririe Reservoir east of the city.  We've lived here over four years now and never been to Blacktail.  Shame on us.  Shame. Shame. Shame.  The place is beautiful and wonderful and only 16 miles from our front door via a lightly traveled beautiful backroad.  The  weekend access  fee is only five bucks and it's even cheaped Monday through Friday--$3!  Why on earth we haven't been out there for all these years is a mystery to us.  We will definitely make it a regular haunt in our local jaunts. 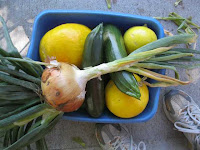 On the way back home, we followed a whim to one of the more obscure of the city's three Community Gardens.  These little gems are one of the reasons we fell in love with Idaho Falls.  We had a plot at the Rollandet Garden in 2008 but dropped it in 2009 in favor of using our own yard to grow stuff.  We've never really checked out the one tucked off the east end of The John Adams Parkway until yesterday.  A couple was in the garden tending their amazing vegetables and heaped free veggies on us. They grew cabbages the size of basketballs and cauliflower as large as soccer balls.  We had no idea such cool season vegetables could grow so well in the hot Idaho summer here. We also learned some teenagers had planted some wheat in hopes of baking their own bread in the garden's earth oven.  Who knew there was an earth oven lurking in this city?  Strange but true.

We enjoyed a very lazy remainder of the day, finishing off Sunday by loading up a few boxes of 9mm while Sunday swapped a gaggle of texts with her daughters.  'Twas a fine early fall Sunday.

Today is all about motor vehicle maintenance.  If all goes according to plan we will spend most of the entire day fiddling with three vehicles.  Hopefully, by the end of the day, everything they need will be crossed off Ye Ol' Checklist.

Have a great Monday and Many Cheers!  jp
Posted by John Parsons at 7:43 AM