The seasons, they are a changin'

As if on cue, the first storm of early fall will roar through Idaho next week.  The NWS Pokemon have this to say today:

A COLD FRONT IS EXPECTED TO MOVE ACROSS IDAHO TUESDAY MORNING WHILE A POTENTIALLY STRONGER FRONT WILL PUSH THROUGH WEDNESDAY NIGHT. SNOW LEVELS AROUND MID-WEEK WILL DROP TO ABOUT 7000 FT. GFS AND ECMWF DEPICT 1.5 TO 2.5 INCHES OF PRECIP THROUGH NEXT FRIDAY WITH THIS SYSTEM OVER THE CENTRAL RANGES.

Luckily, all the bluster will be gone by the time we head out to City of Rocks (COR) a week from tomorrow.  Oakley is a quaint little town not far from COR but it sits at a lower elevation and is hence warmer than COR.  Look at those great temperature progged for Oakley beginning next Thursday-Friday!  All the summer dust will be washed off--the rocks will be glistening, the roads will be nice and settled, there will be moisture in the soil for nice chilly mornings, the day time highs will be textbook nice for hiking.  The evenings will be comfy crisp. YEA!  It promises to be a great trip, especially now that we have Annie, the big truck, back from the repair shop and in good condition once again.  We camped at COR two years ago and, naturally, made a blog for the area.  There's a couple of bad links on the blog but it's still real viable.  You can click here to see it. 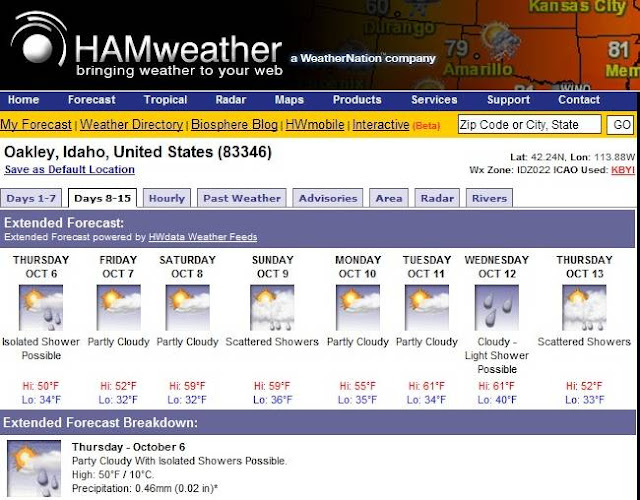 We have a "keeping our appointments" story to tell this morning.  It's kind of a long story but it's sure worth telling.  It started maybe a couple of days ago when Mike V. asked us to do a favor and go to Ski's Gun Shop yesterday in search of .44 Magnum brass shell casings.  It seems these items are hard to find right now--maybe it's because of all the bear stories making the news.  Who knows?

OK, at last weeks shooting match, we were once again taught that pre-match practice is a necessity unless one wants to embarrass one's self.  So, we decided to go out to the range mid-morning yesterday, put in a really long practice session and then go to Ski's when they open at noon.  (Ski's is only open noon to 3 pm three days a week--it's a very eccentric place.)

OK, so we get everything loaded up and head off to the range.  We fire off about 30-40 rounds out of the 1911 pistol and grab a box of 100 fresh rounds all excited about shooting some more.  Opps, we brought the wrong ammo--9mm instead of the much larger .45 ACP.  At first, we were slightly dejected and perplexed.  Having the wrong ammo meant that we had nearly an hour to fiddle with before Ski's would open at noon.  We packed up and drove aimlessly around farm country looking for recently-dug potato fields.  Finding none, we thought, "Oh well, we might as will go sit in the parking lot at Ski's and twiddle our thumbs for 20-30 minutes."  So, we arrive at the parking lot and quickly tire of twiddling our thumbs and thought, "Gee, let's go gas up the Samurai, that will take a few minutes."  So, we moved next door to the Maverick gas station and began fueling Suzi Q.  Imagine our surprise when we looked at the adjacent pump island and there stood none other than Ed Cannady!  WOW!  Talk about keeping an appointment!

If not for Mike's request and if not for bringing the wrong ammo and if not for finding no fresh potatoes strewn about the landscape, we would have absolutely, certainly missed Ed on his brief refueling stop.  Ed played a  pivotal role in bringing us to Idaho.  Without Ed, we wouldn't be here right now.  Ed was our Supervisor for four years out at Bowery Guard Station.  LBRs have read about him in our story recounting how we first connected with Idaho in April 2004.  We haven't seen, emailed, or talked to Ed since August 2007.  It was like a reunion.  Ed and I stood there amid the gas pumps getting all caught up on each other lives.  Ed is battle a cancer right now and it's tough on such an athletic, active strapping man as he.  His chemo appears to be winning the battle but he won't know if he really beats the cancer for a few more months.  Ed was on his way to the Tetons for a solo break from his medical issues. 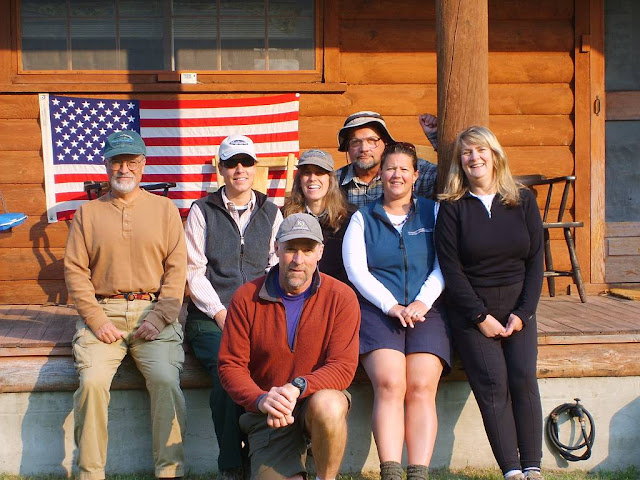 In the above photo, that's Ed kneeling in front.  The picture was taken the last time we saw Ed in August 2007 just a couple of days before we left Bowery to come to Idaho Falls.  Ed brought out a bunch of Forest Service people.  The woman at far right was Forest Supervisor then and has since retired.  The guy at far left, Terry Clark, was the Forest Recreation Staff Officer and he's retired, too.  He is now Executive Director of the Sawtooth Interpretive & Historical Assn. in Stanley, Idaho.  The woman to my right in the back is Sara Baldwin.  Tomorrow is her last day as SNRA Ranger.  She's rented a bar and a band in Ketchum for her retirement party Friday night.

We didn't always see eye-to-eye with Ed when he was our Supervisor but those days were long gone yesterday.  We were really happy to see him once again and any frictions we once had were forever forgotten.  I was so happy to have crossed his path by such pure serendipity.  We exchanged a great big hug and then each of us went traveling toward our own destinies once again.

Whenever something totally unexpected happens like this, we call it "keeping our appointments."  Such appointments are usually kept by following our intuition, an unexpected turn of events, pure luck or a combination of all three.  Thanks to Mike for asking the favor and I gotta say I'm glad I can be a forgetful airhead as once in awhile as that trait can pay memorable dividends.

Have a great day and Many Cheers!  jp
Posted by John Parsons at 8:56 AM