This is a rather long story about red corn.  The story goes back 20 years to the Summer of 1991.  Susun and I were living in Susun's little 8 by 40 mobile home on the banks of the Verde River.  We thought we could make a living by growing and selling produce.  We didn't succeed at making a living but we did more than cover our costs of production, so to speak.  One of our plants that did really well that summer was called New Mexico Red Grinding Corn, or something similar to that name.  There was no demand for gridning corn and so we didn't make a single penny trying to sell it.  We did, however, win blue ribbons at the Yavapai  County Fair in Prescott and the Arizona State Fair in Phoenix.  We were understandably quite proud of that red corn.

The winning corn kernels went into one quart Mason jars and were stored in boxes under the trailer.  In February 1993, the place was damaged and we had to evacuate due to a big flood.  We moved over to Rimrock and built the straw house in 1994 and the rest is history.  Well, somehow that red corn survived the flood and followed us to Rimrock.  It sat in various storage locations for more than a year before if finally wound up stuffed in an old cabinet in one of our sheds.  I bet the heat in that shed during the ensuing 12 summers probably reached 120 or higher many times.

When we sold the place in 2006, we had to clear out everything.  I remember pulling out the Mason jar of those seeds and wondering what to do with them.  We even thought briefly of simply pouring them on the ground.  Surely, they couldn't viable seeds after all those years.   Something about the seeds tugged at my intuition and I gave them to Goatherder with the disclaimer that they might not be any good any more.

Well, bless his heart, Goatherder put them in his kitchen pantry and promptly forgot about them.  Time passed.  GH and his son, Josh, found the seeds earlier this year and Josh took a liking to them.  Now those seeds have taken on a whole new life.  Amazingly, the seeds were still viable, but then that's where Goatherder's narrative begins.  GH mentioned these corn seeds twice on his blog beginning back in May.  We have those excerpts below between double dashed lines.  The grand finale took place this weekend then the resurrected red corn was harvest in all its glory.  It's a wonderful story--one that would warm the hearts of our ancestors. The miracle of seeds sprouting and growing into magnificent plants is a marvel of the renewal of life.  To know those seeds survived a rough and tumble, neglected life for 20 years and still produced majestic ears is truly inspiring.  THANKS, GH & JOSH for bring these plants back to life! 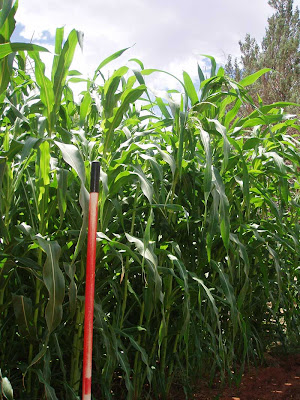 Some time back I wrote about planting our friends' red New Mexico corn they grew a long time ago down on the Verde. Well, it came up and grew with great gusto. Some of the stalks were close to 15 feet tall. People driving by slowed down to gawk at it. One guy even pulled over.

"Hey what kinda corn izzat innyhow?"
"It's red grinding corn".
"Izzit sweet?"
"No"
"Well then what's it taste like innyhow 'fit ain't sweet?"
"Um...it tastes like corn."
"Oh, well innyhow it shore is purty!! You gonna feed it to them goats?"
"No. I'm going to grind it and make cornbread"
"Ooooh Corrrrrnnnnnbreeeuuud, now I like me sum cornbread!"

Just having it out there made us feel good whether it actually made any corn or not.  The picture above is from earlier in the summer when it was only about 7 or 8 feet tall and hadn't begun to tassle yet. Here's another picture of it standing tall behind the bantam sweet corn I planted just a few weeks ago as an experiment. I took that shot just a few days ago. It was finished at that point, dried silks and leaves beginning to dry. 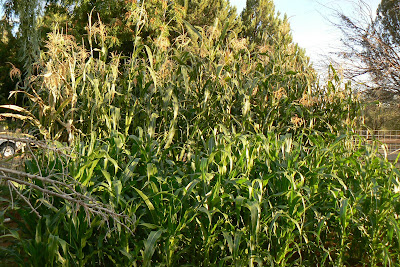 This wasn't a big plot of corn, mind you. We planted 200 seeds in a plot about 12 or 14 x 25 or so. Yesterday Josh came down from NAU and we harvested it. I wasn't planning to pick it so soon but after picking a few test ears I could see it was ready and I was worried about mildew with the high humidity we've had and are still having, so down it came.
I'm pleased to report that it produced splendidly. We had ZERO worm damage. It's nicely productive and most plants produced two ears with many reaching full maturity. We haven't counted, but we picked I'm sure well over 200 ears.
It's drying inside now on a really inconvenient rack in the living room, until I can figure out some raccoon proof place to keep it. Last year's puny blue corn harvest provided the party snacks for a club of raccoons that invaded our neighbor's barn where it was drying. Not going to happen this year no.
Truth be told though, it's not red corn anymore. John and Susun grew a variety of grinding corns that summer back in 1991, and it appears they all got together and pollinated each other! We can see traces of the Hopi White, Yellow and Chin Stripe corn that were neighbors to the Red. We don't care really and aren't terribly anal about seed purity, although we know we probably should be.
Heck, every year I can't resist planting more than one variety of heirloom squash and then save the seeds. Sometimes the next year's plantings are edible and sometimes they're not.
The picture above is of some of the exemplary ears we saved to look at for a while before they're ground.
Kate will take it all up to Moencopi when it's dry and run it through the sheller and grind it and we'll be baking cornbread for John and Susun's return in November.
Posted by John Parsons at 7:08 PM