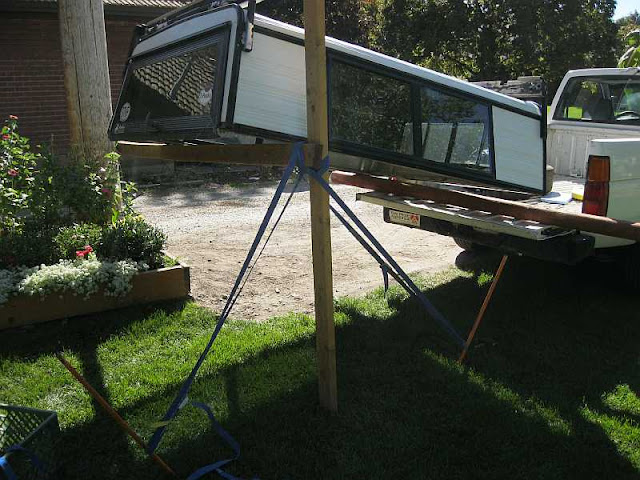 What you see above could readily be found almost any day on the back roads of Hillbilly Country.  There are far less charitable ways to describe such a rig but few are fit for a family blog.  Suffice to say when the going get tough, the tough turn to Hillbillies for inspiration.  We needed to install a new gasket between the camper shell and the truck bed.  Problem:  how to remove and support the camper while the gasket was being installed.  Voila, a few warped boards, some nails, a couple of concrete form pins and, naturally, two NRS cam buckle and it was a piece of Hillbilly Cake.  Hopefully, we did our gasket job correctly and the camper won't leak water any longer.

Annie is back in the shop this morning.  We were really lucky on her problems and issues yesterday.  The bill will definitely come in less than $500 and not near $2000 as we feared.  The big oil leak was not a front motor seal as we feared but valve cover gaskets instead.  The bill for that repair will only be $200 as opposed to as much as $1000 to replace the front seal on a 454 cubic inch engine.  Ditto the brakes.  We feared we were going to need a new booster assembly but it turned out to be a simple adjustment of the rear shoes.  Whew!

Our day took an interesting turn Tuesday when we drove out to the Sand Creek Golf Course and the place was locked up tight with nobody in sight.  We learned it was closed for "scheduled maintenance" but we rubes had no clue of such a thing.  Meanwhile, America's Best called and told Susun her new eyeglasses were "in."  So, we headed down to Pokey, as it is affectionately known here, to pick them up.  We squeezed in a visit to Pokey Deseret Industries and a local gun shop as well.  After returning some, we commenced to set up our Hillbilly rig above and barely had time to log another session on the treadmill before Happy Hour arrived.

The 23rd Annual Verde River Day was held last Saturday.  We will talk more about that in a blog post soon.  You can click here for the story and 46 photos.  Ironically, out of the 46 pictures, the photographer only took 3 or 4 of the river.  Typical.
Posted by John Parsons at 9:06 AM