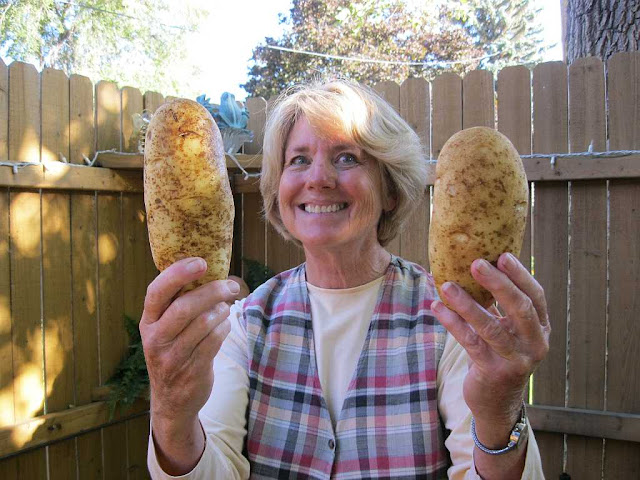 There's a sprawling potato field on the road to the shooting range.  We've been able to watch it since early June.  We even took Roger's photo "outstanding in his field" in early July there when the potato plants were flowering.  Well, as we drove to the shooting match last night, we were delighted to see the spuds had been dug that very day.  We practically leaped from the Samuri and ran into the freshly turned dirt.  Giant spuds lay strewn about like the proverbial gold in the streets.  We have only a few minutes so we gleaned the biggest and best we could grab.  These beauties each weigh more than a pound each.  They are textbook specimens of their species.

We've been studiously following the Atkins low carb diet for the last couple of weeks.  However, the Atkins diet is out the window tonight.  How often do you get a chance to wolf down a Genuine Idaho #1 Potato fresh from the field a day after it was dug?  Well, not real often, we can tell ya that for sure.  So, to heck with the low carb diet, Spud City, here we come!  Think real butter.  Think sour cream. Think fresh green onions.  Think a hot potato baked to perfection, steaming in the evening light.  Ah, think bliss--that's what an Genuine Idaho #1 Potato is all about.

Many Cheers!  jp
Posted by John Parsons at 5:47 PM

Bacon, they need bacon. They are crying for bacon.

You guys sure have thrown out the diet this week. First it was back to wine, now it's enormous eastern Idaho glow in the dark tubers. And I'm with The Goatherder. Get some crispy bacon on those taters.

I'm still holding out from wine and spuds and it's been torture. But joining a gym and getting on a "dreadmill" would be even worse.