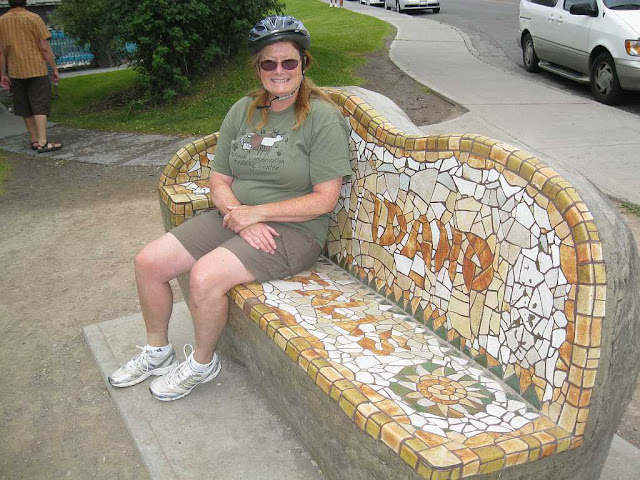 Yep, each year at least once and sometimes more often, monsoonal moisture finds its way clear up here. Strange, but true.  And you thought the monsoons were only for Arizona and the Four Corners, eh?  Nope, Buckaroo, monsoon happen here, too.  This morning it's drizzling pretty good under gray skies.  The weather wonks say it's going to get wetter later today and into the evening and for the next few days.  Generally speaking, the appearance of the monsoon way up here almost always seems to indicate that the peak of summer's heat is history.

During those four summers we stayed out at Bowery Guard Station deep in MOAN Country, we dutifully charted each day's high and low temps as well as precipitation.  Each year there was one protracted heat wave typically lasting upwards of 10 days straight.  Afterwards, monsoonal moisture would creep into the area and we always knew that was it for summer.  POOF, gone just like that.  It's a really safe bet that summer here has vaporized by mid-August and that's only two weeks away so there you go.  Now it's time to begin thinking about the upcoming fall season and all the various projects we have to complete before we head south.  We're still of the opinion that we're going to have an early, cool, wet fall season.  All that volcanic ash that's been spewed nearly up into space generally always creates early, cool, wet fall seasons.  Hopefully, our leaves will come off early this year and we can head south in late October instead of mid-November as we did last year.  My, my, so much to do between now and then.

Yesterday was a fine day with Marti B, The Spudboater.  We enjoyed a nearly 3 hour bike ride all over the Greenbelt and through downtown and so forth.  It was a great lazy day afterwards until the bubbles started blowing.  We finished up the day with another rousing round of croquet before the rain began drizzling too heavy to be outside. (The photo shown above is Spudboater enjoying the Spud Bench on the Greenbelt.)

DR & LBR Maggie sent along a photo portfolio of her grandson Jaxson.  It was tough to pick only one photo--all of them are so cute--but the carrot and the kid was our #1 choice.  Thanks, Maggie!  Maggie thoroughly enjoyed Jaxson's interaction with the garden.  Have a great first day of August!  Cheers, jp 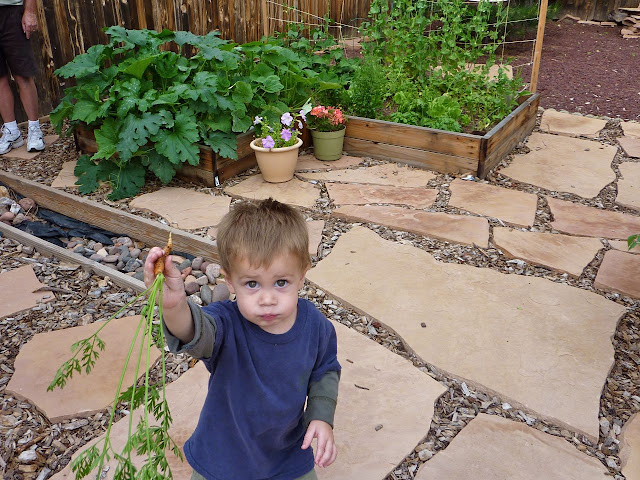 Ah John, Im disappointed...I was expecting you to wax poetic about today's rain...the sounds of pitter patter on the leaves, gushing gutters overflowing with roof trash collected during the summer, the squeaking opening of house windows to let in the cool fresh air as plants hungrily gulped unexpected manna from the sky. The feeling that roof shingles have of being wanted as shingles swell with moisture to direct the raindrops (or in some cases, rain deluges) into well worn paths headed for mother earth. The robins and other birds who are chirping while hiding their head under one wing to keep dry while at the same time keeping an "eagle" eye out for that plump earthworm wiggling its way across the lawn. The sounds of scraping lawn furniture on concrete as homeowners hastily pull their chairs and lounges under cover or the sounds of raindrops hitting plastic tarps which cover them. and above all the unheard blades of grass that call to each other: "thank heavens we won't see the barber today" while their greatest nemeses, dandelions and other weeds rejoice in having once again beaten the weekly treatment of Roundup.