Staging for The Fireworks 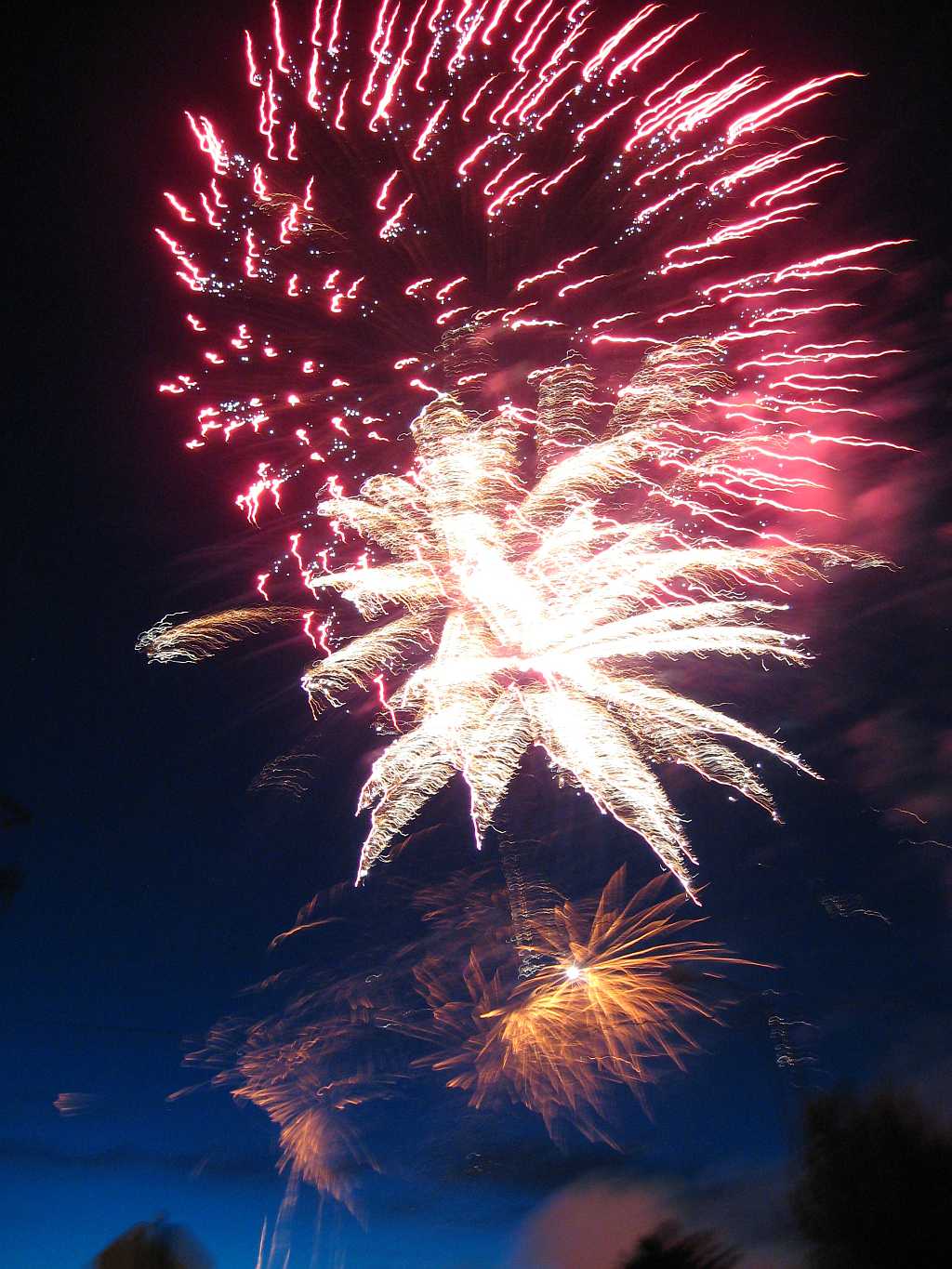 We didn't go down to the Greenbelt today.  We got "raptured" by our yard and so forth.  It just seemed like an patriotic upright and upstanding thing to do to take care of business in our own yard today.  So we did.

We've been down to the Greenbelt Gig on the 4th pretty much every year we lived here.  It's mostly the same but the No. 1 thing we both remember is that it's real hard to ride bikes.  Mostly, you walk your bike through the throngs of people slurping sugar in all its various July 4th form factors.  Sorry to say we have no photos of all that transpired down by the riverside today.

Now the big deal is staging for the fireworks.  The aerial show doesn't kick off until 10 pm tonight.  That's a little more than 2 hours away as I write this tonight.  Normally, I'd be staging for beddy-bye time right about now but tonight?  Nope, no way.  The Idaho Falls Fireworks is truly one of a kind.

Why's that?  Well, there's this Rich Guy.  You don't need to know his name.  He's just your Basic Rich Guy and he's got this thing about fireworks.  Maybe when he was a little kid he got hypnotized by fireworks or maybe his parents wouldn't let him have any.  Whatever.  The bottom line is that he spends lavishly on the fireworks.  There is no public money involved (except for the Police and various public safety agencies).  Tens upon tens of thousands of people flock from all 'round to witness the spectacle that is known far and wide simply as "The Idaho Falls Fireworks."

You would simply have to see them to believe them.  They have no peer in my life experience.  They are so far "over the top" that they redefine what "the top" is all about.  In other words, this Rich Guy sets a real high bar.  Rumor has it he spends in excess of a quarter million dollars each year on "his" fireworks.  You see, that's part of the perks of being a Rich Guy.  When you pick up the tab they really are YOUR fireworks.  It's lucky that the world-at-large calls them "The Idaho Falls Fireworks," instead of The Rich Guy fireworks.  Trust me, nobody would mind such a change in nuance.

Anyway, this Rich Guy hires a team of people to work ALL YEAR on each year's fireworks.  Their work begins on July 5th each year and they are paid to work ALL freaking year getting ready for the next rendition.  Here's one major technicality that makes the planning so complex.  The Rich Guy buys out the airtime of the area's major FM station each July 4th and they choreograph the fireworks note-for-note to a symphonic musical presentation aired on FM.  People bring their headsets and listen as the show unfolds in the night sky above.  Meanwhile, The Rich Guy hires one of the world's premier fireworks companies to stage the show.  They use an array of hardwired computers to synchronize the precise launch of each aerial bomb down to the millisecond with the notes being played on the FM radio.  Hard to believe?  Trust me, 'tis true.  There's simply nothing like it in my Life Experience.  As far as I am concerned it can't be topped on this earth unless some other Rich Guy decided to play "one up" on this one.  There's absolutely no municipal or non-profit fireworks displays that could possibly compete with this one.  That's why nobody knows how many people show up to witness it each year.  The baseline guess is 50,000.  Some people think it's much closer to 75,000 and some wide-eyed people actually toss around the magic number of 100,000.  Bear in mind the city's population is 50,000.  When it comes time to launch The Rich Guy's fireworks, this city stands still as a stone.  Nothing moves.  We are all raptured.  And for good reason.  This show has no peer.

For the last two Holidays, Susun has stayed at home and I have bicycled alone down to Ground Zero within 500 feet of the launch point.  I can assure you that the experience from that vantage point is mind-expanding.  Tonight Susun wants to join in my ride.  She's very safety conscious and, on this night, I am not.  I throw caution to the wind.  So, it's going to be interesting to see how we fare as a pair tonight.  I have been able to get to the John's Hole Gate each of the past two years.  Wish us luck in getting there, or somewhere near there tonight.  It is a worthy goal and destination--one worth fighting a little bit for.  Who cares about an elbow here and there, eh?

Last year, I got real nostalgic about my Dad.  I put up two posts--one on Dad's experience watching Nuremburg being bombed.  You can click here to read that post.  Finally, after I went down to the fireworks last year, I have to say they were a very emotional experience for me.  When I came back home, I posted up some photos and dedicated the post to my Dad.  You can click here to read that post.  What we shall see tonight will look a lot like the photos you can view from last year.  The nuances will be different, the timing will be different but there's won't be a lot of difference in the photos I take tonight compared to last year's photos.

Whenever I stand directly underneath such a spectacular and ground-shaking aerial display such as we will see once again tonight, I always feel a profound and emotional bond with those who have fought and died to gain and preserve and protect our freedoms that most of us take for granted.  Freedom isn't free.  Untold thousands of people have had to put their lives on the line to buy our freedom.  And many thousands of them gave their lives in that precious process.  Please let us honor and celebrate them as this July 4th draws once again near to darkness.  We are a Blessed Nation and may God Always Bless America Forever!

Many Cheers, jp
Posted by John Parsons at 8:18 PM