Well, well.  Who should we see in this Sunday paper but none other than DF & LBR Terry M., Chief Engineer of The Miller Line Railroad right here in Eye-Dee-Hoe Falls.  The newspaper did a big spread on Terry's incredibly extensive railroad--the one that pretty much fills his entire basement and takes four engineers to run properly.  Terry decided back in June that he's going to revert his basement back to its natural landscape and tear up the track and take down all the buildings and even level Mt. Shasta.  He enlisted our assistance in getting the paper to come and do a story on him.  The conspiracy worked and, voila, the article is making the whistle stops around Eastern Idaho today.  We've archived the article on our Google Docs so you can read it (pending official permission from the P-R, of course).  You can click here to read it.  Way to Go, Terry!

Speaking of the Post-Register, Publisher Roger Plothow sent us a late evening email with a brief report on the Clayton Chili Cookoff yesterday.  Here's what Roger had to say, "Well, we had a great time in Clayton, but I'm not sure they'll invite us back. No, we didn't do anything embarrassing, but our adjudged chili winner included -- hot dogs. Not sure how that happened, other than the cook also added lots of bacon. Anyway, there were seven entries and all but one were pretty good."  THANKS, Roger & Kathleen!  Ya dun good. 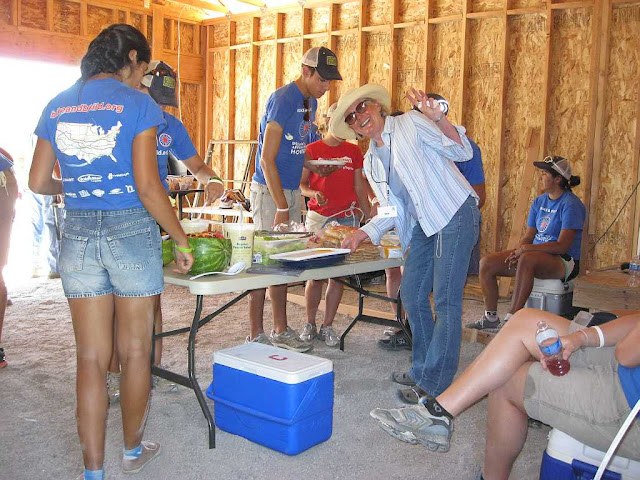 Susun worked her anatomy off yesterday helping prep, stage, serve and clean up lunch for the Bike and Build People at Habitat for Humanity's Ammon construction site.  We went over to observe the scene.  It was very hectic and busy.  Miss Susun pretty much served all of the young bikers single-handed.  Whew, it tired me out just watching her in action. 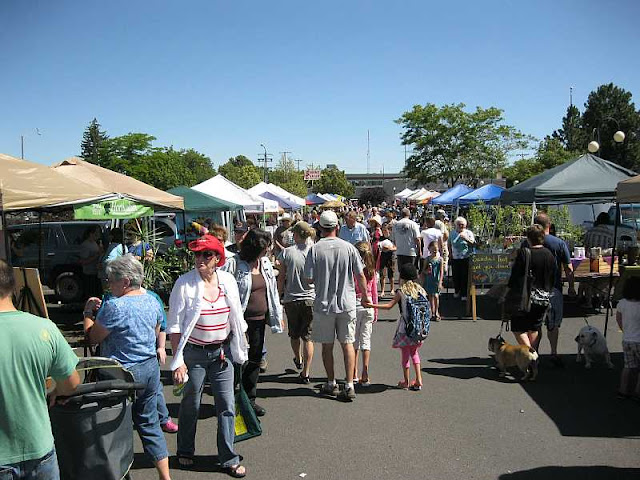 The Farmers Market was pretty much packed yesterday morning.  People were practically fighting each other for parking spots.  The place was swarming with shoppers.  Some vendors enjoyed lines at least 10-deep!

We trekked out to the shooting range for the fourth day in a row.  For the first time we were able to get the Bonomo Custom 1911 firing correctly without a jam or a misfeed.  It's so darned accurate it's uncanny.  It's easily the finest pistol we've ever owned--far and away.  Thanks, Tom! 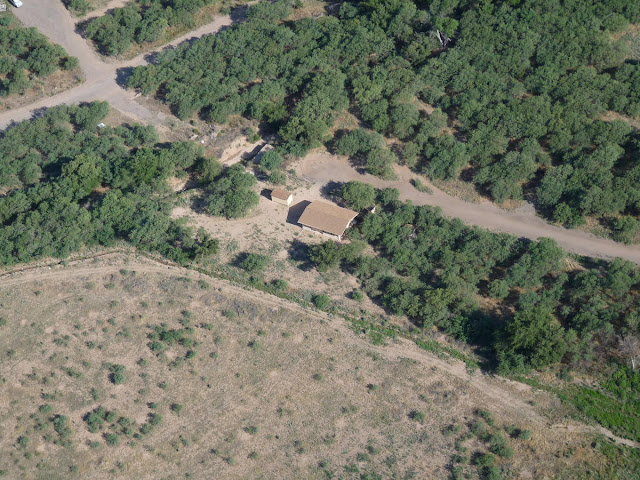 Speaking of the Verde Valley, here's a photo of our Second Chance Ranch taken by our Eagle Eyed neighbor, Gary W. while doing the dawn patrol in his ultralight.  Gary reports everything is hunkie dory down there. Thanks, Gary. The mesquites are obviously in full bloom but the weeds so far haven't become overly problematic.

As LBRs know, that open area in the bottom of the photo is Montezuma Well Nat'l Monument and it was first homesteaded by Verde Valley Legend Wales Arnold.  Our place is part of the original Arnold homestead. Ace Reporter Steve Ayers recently did an article on Wales. You can click here to read it. Steve's article set the record straight about a lot of little known facts concerning The Life & Times of Wales Arnold.   We've been telling Wales Tales for over 25 years so we will now have to correct our stories to conform with the published facts.  Thanks, Steve!

It's nice and calm and quiet here this morning, even a tab bit on the cool side.  What was that we said about a whiff of fall in the air?  However, things will change later today.  That's when Bonnie & Bob B. shows up with their young black lab and then Rose S. arrives from Sedona via the Salt Lake airport and the four hour shuttle north.  Bonnie and Bob live in Cornville, Arizona, but have been in Jackson Hole for an unspecified workshop.  It's going to get quite lively here later today and for the next few days.

On one final note, we ask our LBRs to send out good vibrations to our Momedy Blogger Kirsty S.  She's had a tough go of it here recently and could use all the positive energy we can beam her way.  Hang in there, Kirsty, we're all pulling for you.

Well, that's about all the daily news we can muster this morning.  Have a wonderful summer Sunday and Many Cheers, jp
Posted by John Parsons at 8:14 AM