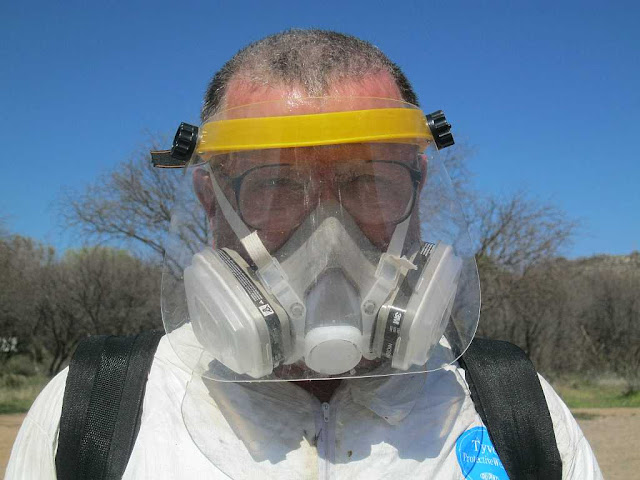 Today was ZTD for weeds. (ZTD = Zero Tolerance Day).  We started about 9:30 and finished up about 2:30.  We hand pumped about 60 gallons through the back pack sprayer while clad in the tyvek suit, knee high rubber boots, impermeable, herbicide-rated gloves as well as full face shield and herbicide-rated air filter.  It was the typical grunt.  We began to really wear out during the past two hours.  Just looked at the temps.  No wonder it became tiresome.  The temp right now is 95 and it was pushing 90 a couple of hours ago.  Geeze.  (NOTE added later: It was 90 or above for four hours from 1-5 pm.)

Well, anyway, it's done.  We learned a lot from our spraying last year and we think we have the right mix this year.  All of the weeds should be totally dead and dry upon our return from our early April trips.  That's when we fire up the weed burner and take 2nd Chance Ranch to black, as wildland fire people say.  It's comforting to know our place can't burn down during the summer dry season since there's nothing left to burn.  (Well trimmed mesquites don't burn.) There will be a couple more spray episodes--spot spraying with the one gallon unit and then a final application of a pre-emergent just before we leave.  The plan worked pretty well last year and we think we have tweaked it to work a little better this year.  Whew, we're glad the grunt part of it is over.  Can't wait for campfire time tonight!  (Campfire fire went well--reporting at 8:30 pm)
Cheers, jp
Posted by John Parsons at 3:58 PM