When my Dad was a Top Turret gunner on a B-17 back over Germany, he was what's called a "Flight Engineer."  He had a lot of responsibilities for the big bomber.  Everybody did.  His, however, was rather unique in that he had to inform the pilot and co-pilot as to whether they were "still flying" and capable of continuing to fly.  If they got too shot up by German fighter cannon shells and 50 caliber rounds, well...hum...somebody had to make they call they "we can't fly--let's bail out." That was my Dad's responsibility.  He was good at it.  He kept The Ramblin' Wreck up in the air when they should have all bailed out.  Somehow, he juggled oil and gas and hydraulic fluid and hand cranks and all the rest of those band aids that kept B-17's flying long past their logical lifespans.  They would lose engines. They would get their airframe half blown to kingdom come and Dad would tell the Pilot, "Hey, we're still flying, let's go."  And they'd go and go and somehow drift in under the clouds back onto the Bassingborn base alive.  My Dad's story is all about the role of a positive attitude and what a positive attitude can do to keep you alive when you should be dead and gone.  He was proof positive that a positive attitude was all your needed to face another day.  I loved listening to all his stories about when the plane was so shot up it couldn't theoretically fly.  You simply wouldn't believe how badly a B-17 could be shot up and still fly.  Even today, that aircraft's ability to stay in the air defies the imagination of modern historians.  But that was my Dad's line to the pilot: "Hey, we're still flying, Let's go!"  And Gibbons would listen to my Dad and repeat back on the i-com, "Hey we're still flying, let's go."  And they would survive.  Such tales as I grew up with are timeless treasures of courage and daring and sheer magic. (Click here for some examples.) 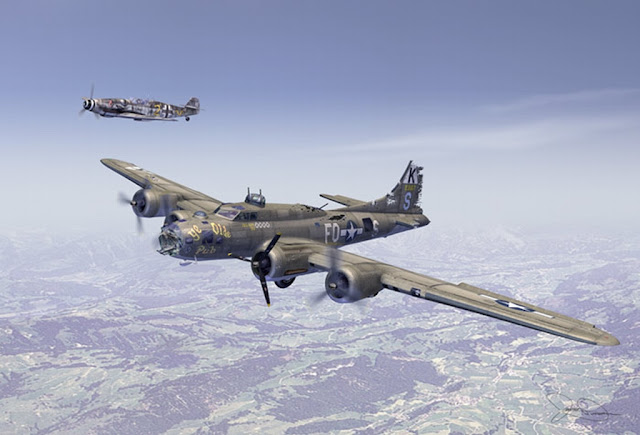 And so it is tonight that I hark back to those stories from my Father when I read about the Southwest Airlines Flight #812 from Phoenix to Sacramento that was diverted to the Marine Corps AFB in Yuma because a six foot piece of the top of the fuselage blew off.

Nobody on my Dad's airplane would have given a second thought about German gunfire that would have blown off a piece of the top of their fuselage.  That part was irrelevant to the aircraft's ability to fly.  My Dad often told me about various parts of the airplane that got blown away and he would get on the primitive intercom and say, "Hey, we're still flying, let's go." and they would carry on, twin 50 caliber guns blazing into the face of swarming Nazi fighters.  Nobody worried about a silly piece of the top of the fuselage.  A portion of the wing?  Well, DUH, yeah, now that would be a problem.  Two engines non-functional?  Yeah, we got a problem. The top of the tail shot off?  Well, that's gonna be problematic.  But the top of the fuselage?  Nah, nobody worried about that part of the airplane.  As long as it didn't affect their line of fire, they were OK with it.

Yes, I know it made national news because in the grand scheme of airline travel news, it's a big story. But I have to chuckle because I know that pilot and his flight crew turned to each other and someone said, "Hey, we're still flying, Let's go!"

PS--If you want to read the true story (from Snopes) of "The Ye Old Pub" shown in the photo above, click here.  The day my Dad was shot down over Germany I must admit he had to say, "We can't fly, let's bail out."  Sometimes, even B-17's can't fly!
Posted by John Parsons at 11:10 PM

This is a great story John! If you still have a copy of your dad's book, I'd love to read it. My previous copy is buried in a pile of books awaiting placement in the new house!