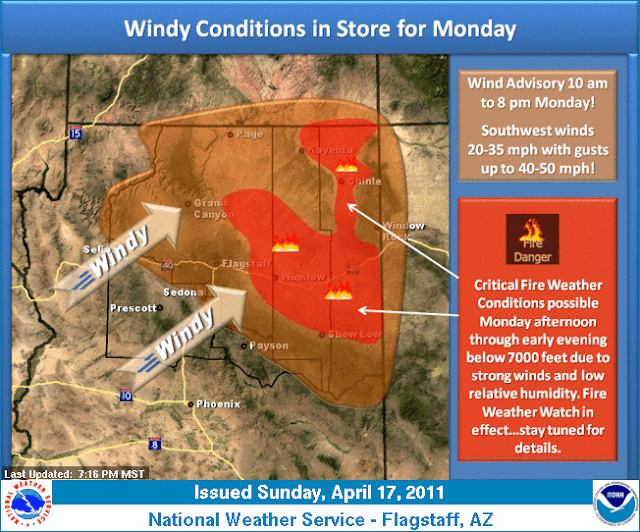 The above graphic says it all.  Let 'er rip!  We will (hopefully) be getting up crack o' dawn and be spraying pre-emergent well before the sun tops the Mogollon Rim.  If the full moon "day after" affect doesn't derail our plans, we can "git 'er dun" before the Big Blow Begins.  Wind is the word of the week here in late April.

The full moon behaved as advertised.  Celestial bodies always behave properly.  When it's supposed to be the full moon, by gosh, it actually IS the full moon.  No delays.  No excuses.  No contract disputes.  No arbitration,  It just happens right when the Moon Wonks say it will.  We like that about the moon.

Tonight, Susun was a tad bit tuckered from her busy social schedule the past couple of days.  I broke out our walkie-talkies and kept her posted on the moon rise.  As a result of our radio chatter, she was able to come out before the moon peeked above The Rim.  (It glows pretty big time before you actually see the tip of the disk.)  We had a nice mesquite fueled fire tonight.  Our last juniper fire was last night.  The juniper is now under lock and key and lag screws, too.

Yesterday was quite the whirlwind.  It was one of those typical full moon cycle days where everything moves a double warp speed and unexpected things happen all day long.  As you know, Susun went off to C-wood at some un-gawdly hour and then I followed along to swap vehicles with her a little before 10 am.

Before I took off, I spent some time messing with my Yagi.  It was quite an accomplishment.  But I digress.  Anyway, I needed to get a piece of OSB cut to 34 by 90 size in Cottowwood and run other errands as well.  One the way back I stopped off at Cornville to visit the Goatherder in action doing his wine-tasting gig.  He does it so well, he looks and acts like Robert Redford in that movie, "The Natural."  If ever there was a guy born to pour wine samples, GH is the guy. So, there were all sorts of chores and tasks to face upon our arrival home.  The late Stephen Ambrose wrote a classic book entitled "Undaunted Courage" about Lewis & Clark's 1803-1806 expedition from Missouri to the Pacific and back.  Whenever I look at my lists I segue that book title into "Undaunted Chores."  Geeze, you just have to keep butting your head into the never ending, ever-expanding list of chores.  Soon, it will end, I know it.

Susun napped when she returned.  We're talking BIG time napping.  I mean who wouldn't nap after leaving their home at 5:15 am?  While she was napping, I finished off my shadetree Yagi and actually beamed it up to the Mingus repeater and had a good ol' hootenanny HAM radio conversation with Captain Bob.  (You can click here to read all about The Yagi Project.)  We had a great chat with Nancy McC.  She had been thinking about bring her mini-motor home down for a visit.  We told her that her Girls (Cedar and Savannah) would be totally black in a heartbeat in our black yard and she wisely made other plans.

Meanwhile, By and by, Jodi and Dex arrived on the dot of 5 pm and the Full Moon Party began.  We were out on the ramada having a proverbial good ol' time.  Susun and Jodi were chattering away as they are always wont to do.  I was preparing firewood when I turned around and nearly fell over backwards.  There stood Wayne R. and his wife, Helen! It was such a shock to see them.  Well, that "All In A Day's Karma" factor really amped up the Full Moon Party.  Wayne and Helen thought they were just dropping by to say "HI" but wound up staying for the campfire and dinner, too.  Dex and Jodi left about 11:30 pm so it was "one of those nights."  The classic "good time was had by all."  (We will post up some photos tomorrow morning.)

Today was yet another day of go, go, go.  Hey, if it's the full moon, you might as well play the hand you've been dealt.  The full moon gets blamed for a lot of stuff.  One thing we can tell ya for sure--use the full moon to put yourself into overdrive and get tons of stuff done.  It works like a charm.  Now tomorrow's gonna be a totally different thing.  We will all be at a very low energy ebb and lucky to get anything done.  But at least today we crossed off about half the things on our list.   BOOM, BOOM, we were both rocking and rolling and making things happen all day long.

By and by, camp fire time rolled around once again.  We got a nice mesquite fire up and running and then kicked back to wait full moon to show its lovely face.  For the first time we can remember, it rose precisely at the very highest point on the Rim that's visible to us.  The middle of the moon sat like a giant gem on that little "V" at the high point.  'Twas a fitting end to our sequence of full moons here since November.

We have only two campfires left here before we depart.  If the wind is blowing at 30 mph or above tomorrow night, there will be no campfire.  Thirty is our cut off wind speed.  Above that and it's just no fun.

We've changed our departure date yet again.  It's now April 21st, Thursday, instead of Wednesday.  More on that later.  Well, life is good and we are happy to be able to continue to check stuff off our lists.

Have a great evening and Many Cheers!  jp
Posted by John Parsons at 10:31 PM