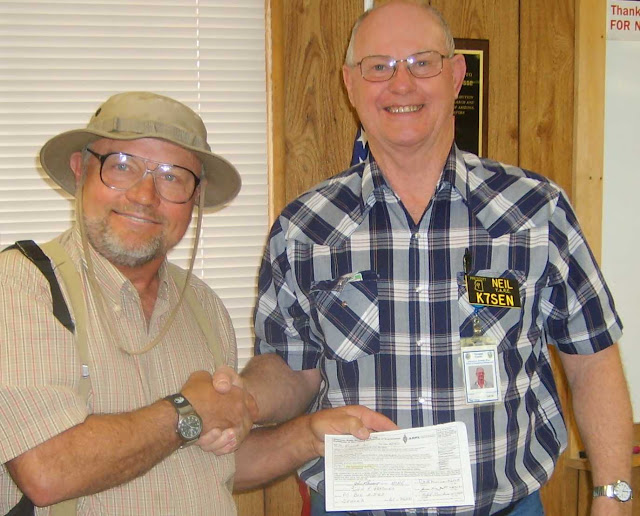 As you undoubtedly know, the media has been ga-ga over yesterday's so-called Super Moon.  We were originally underwhelmed by the whole concept.  Afterall, every full moon phase is a monthly cycle to be endured.  Something weird is usually bound to happen during any typical full moon.  It goes with the lunar turf.
So, we weren't expecting much out of the Super Moon.

However, three interesting things took place yesterday.  You be the judge about this trifecta.  First, we learned The Spudboater wouldn't be able to race in the Canoe Challenge next Saturday.  The power of the waxing moon helped us really unload some choice words on the organizers.  Frankly, our emails were rude.

Second, the waxing moon caused us to cram our booties off for the ham exam.

Third, the waxing moon helped us find, buy and install a hardtop for the Samurai.  Unfortunately, the haste and hurried-ness engendered bb the typical full moon caused us to forget a vital part for the hardtop when we picked it up.  OK, there you have the stage set for yesterday's trifecta.

We got up at 5:30 am and continued to cram for the exam.  We rushed over to the far west side of Prescott and took the ham exam.  We scored a perfect 100% and were Happy Campers.  Then we jammed way back east out to that lonely airstrip where we bought the hardtop.  The missing part was supposed to be taped to a fence post.  Nope.  No luck.  As we were walking down that lonely granite gravel strip, Volkzuk called.  (That's the seller's ZOA nickname.)  He said he might be able to meet with me in three hours.  Dejected and tired, I decided to return home to the Verde Valley.

After arriving home, Susun brightened my spirits by having a chicken sandwich already made and sitting in the fridge with a wonderfully sweet note.  THANKS, Susun, the power of your positivism is awesome!

By and by Volkzuk called again and said, "I can meet you in 45 minutes at the Prescott Valley NAPA."  So, I jumped in the Nissan and jammed through some of the craziest traffic I've seen outside Salt Lake City.  The full moon makes carzy drivers crazier.  A Super Moon makes them Super Crazy.  Volkzuk showed up within a minute of the appointed time.  But it went right down to the wire.  He couldn't find the part in his many pockets.  He fumbled fuming through every pocket twice before the part magically appeared.  Ah, SUCCESS!  I picked up a pair of color-matched metric machine screws at the NAPA and blasted back home, arriving tired and wiped out.  But at least the missing part was on hand.  I installed itimmediately and now we can actually USE our $500 hardtop.  Whew.

Susun had a wonderfully relaxing and fun day with Robin.  They had a Girls Day in Cottonwood, having lunch at a Thai place, browsing all the Old Town shops and buying gourmet olive oil and blueberry balsamic vinegar, too.  Susun can brighten the most tiring and arduous of days and so she helped rally me up from the fatigue of far too many stressful miles yesterday.

I cut some mesquite and we enjoyed a great campfire.  Gary brought over a Yagi antenna and we talked HAM stuff for awhile.  Meanwhile, at 7:24 pm that Big Boogie Man--The Super Moon--finally showed his glowing white face over The Mogollon Rim, rising just left of Hollingshead Point.  The three of us stood in awe of that handsome Mister Moon and then stirred the embers awhile more before bidding goodnight.

We came in to a fine baked chicken-mushroom casserole and I decided to check Ye Ol' Email.  Much to my profound shock and awe and abject amazement, there sat two emails from the Canoe Challenge race organizers.  One was an apology from the Main Man and the other was the form with which to registerThe Spudboater for the race. Amazing, but true.  It was a stunning end to a wild and crazy day--the Super Moon Trifecta!

We're profusely thankful everything turned out OK during the waxing moon cycle this week.  Each of the three of these little soap opera vignettes could have easily gone the other way.  Enjoying three great gifts in a single day somehow makes their total greater than the sum of their parts.

You may not have ever realized this but you will probably agree.  Begin watching yourself, your family, friends, neighbors and people in stores and on highways on the day following a full moon.  There is a noticeable ebb of activity and energy on that monthly day.  People are moving slower and sometimes appear to be "dazed and confused," as the saying goes.  We sure feel that way this morning.  We're moving low and slow and who knows when our energy tide will begin to rise and flow again.  We're very happy and glad this past week is now just a historical footnote.

PS--Kirsty's Baby may have been born yesterday, too.  She was due March 16.  As you can see, Kirsty left a comment yesterday hoping the Super Moon would lure her Baby out.  Thanks, Kirsty! We send our prayers that all is well with Kirsty and her Family.  Please join us in sending positive energy her way.  We anxiously await Kirsty's Birth Announcement.

PPS--Happy Spring!  At 4:21 pm today (Sunday) March 20th, it is officially the Vernal Equinox, AKA: Spring.  Sing a Happy Spring Song and spread some spring cheer.  Yea, SPRING!
Posted by John Parsons at 8:42 AM

Instead of a Bad Moon Rising--a Super Moon Trifecta clearly trumpets a new day and new way of Springtime at Montezuma Well. I'm so excited that our admonitions and followup emails and calls by both of us resulted in an invite to race. What fun! I hope you and Gary are contemplating if I really need a duct taped rudder or not.

I watched that full moon rise above Boise last night with clear skies and Orions Belt shining brightly, sharing wine and a soak in the hot tub with long time friend back from the Antarctic who was in Christchurch the day of the earthquake. Interesting story to say the least.

Congratulations on getting your new HAM license.